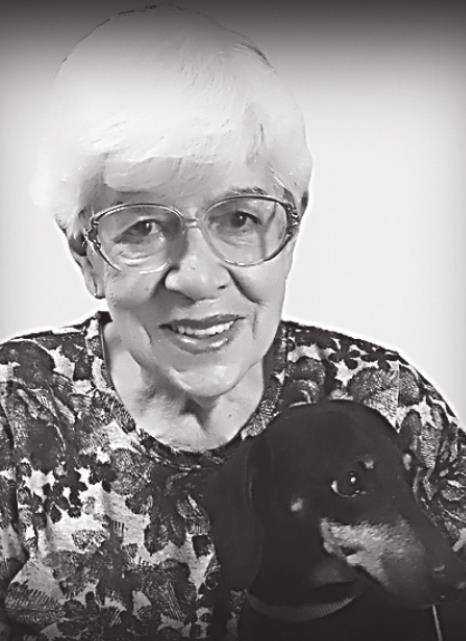 Gloria Ann West Bradley, 82, loving mother and dear friend, passed away peacefully in her sleep from complications related to dementia, on Thursday, November 11, 2020.

Bradley, a devoted mother, expert legal secretary, and community and church leader, spent the last four years of her incredible life in San Marcos, Texas, home to her eldest daughter.

Gloria was born in Williamson County, Texas and was adopted at birth by Winona and James Rufus West. James died at a young age. Winona married Ralph Wilson, who raised Gloria as his own daughter.

During the 1950s, Gloria was a member of the Shamrock Hilton Corkettes synchronized swimming team. In one of the most extravagant social centers for many Houstonians and visitors from around the country, The Corkettes took top honors for their disciplined talent and creative teamwork.

She graduated from The Kinkaid School, a premier college preparatory high school in Houston, and attended All Saints Episcopal Junior College and the University of Houston, where she met her to-be husband, Joe Billy Bradley, a handsome football player.

She spent the years when her children were young as a stay-at-home-mom in Southwest Houston, where she was active in their schools, sporting organizations, scouting, at St. Mark’s Episcopal Church in Bellaire, and with the Diocese of Texas.

Gloria and Bill Bradley moved to Rosenberg, Texas in 1973, and purchased a 100-year-old Victorian home that they painstakingly remodeled for their young family of four children, along with a steady stream of dogs and cats. Gloria began gardening, growing fresh vegetables and fruit for her family, friends and neighbors.

As a young couple, Gloria and Bill instilled a love and respect of nature in their children, spending weeks at an old log cabin on Livingston, Texas, catching fish and exploring the Piney Woods. Galveston was a summer favorite, with annual week-long trips on Crystal Beach or the West End of the island, catching fish, collecting shells, and enjoying the fresh Gulf breeze. Gloria passed along her unique talent in finding sand dollars, her favorite keepsake from the Texas Gulf Coast.

Gloria was active in Rosenberg, volunteering at her children’s schools, with sports leagues, church activities at Calvary Episcopal Church in Richmond, supporting the Fort Bend County Fair, and participating in Gin Tournaments. She spent countless hours restoring the family home, volunteering in the community, and hosting neighborhood, sports teams and school events.

Gloria delighted in the adventures of motherhood, raising her brood as faithful, third-generation cradle-Episcopalians; and serving in many youth organization leadership roles, from sports team mom and academic coach to youth advocate, church youth leader, and mentor to her four children’s friends.

Along the way, she and her “wine-drinking best friends” formed an arts group, “The Elles,” creating one-of-a-kind purses, paintings, and other objets d’art for friends and relatives; celebrating accomplishments and supporting one another through losses, with the kind of laughter and tears that only true friends can share.

Her children were the light of her life, and motherhood suited her, as she raised her children with sharp wit and loving kindness, instilling in each of them integrity, the value of community service and the importance of education

In Rosenberg, already a gourmet cook, Gloria became an expert chef of wildlife and created delicacies from the deer brought home from family hunts, and duck and geese from the family duck lease in nearby Damon, Texas. Her family, especially Bill and the boys, spent hours setting out decoys and hunting duck and geese.

As the wife of a career law enforcement officer, Gloria was active in support organizations and activities with other police families.

When her children entered middle school, Gloria entered the workforce, first working as a secretary for Fort Bend County Precinct 1 Commissioner Johnnie Pustka, a job she held until 1977. She moved to the Fort Bend County Courthouse, where she because the Court Coordinator for Judge Charles Dickerson, 240th Judicial District Court in Richmond, Texas. For 13 years, she managed the docket, prepared the annual budget and served as a liaison among the court, attorneys witnesses and the public. She also served visiting state judges, including John L. McKellips of the Second Administrative Judicial Region of Texas.

Gloria was a favorite of everyone who had business in the courthouse. She developed friendships that brought her a lifetime of joy: traveling with friends, attending fine arts events and becoming a leader in the Fort Bend County Fair and Houston Livestock and Rodeo volunteer teams.

Although her marriage to Bill Bradley ended in the early 80s, they remained friends and active partners in continuing to raise their children. Gloria never remarried.

Upon Judge Dickerson’s retirement in 1990, she went to work for Wettman & Wettman law firm in Houston as a legal administrative assistant, where she managed total case management of family, civil and personal injury litigation, supervised office staff and reviewed billing and accounting.

When the commute to Houston became arduous, she took a position as accountant for Mobile Home City in Richmond, where she worked until she retired. She often filled in for Fort Bend County district court coordinators when they attended conferences or were out, enabling her to remain active in the legal and political activities of the county.

In retirement, Gloria doted on her grandchildren, attending activities they were involved in and visiting and hosting her children and their families. She loved her pets, which she was accused of treating better than her children, and enjoyed traveling adventures with friends. She and her friends especially enjoyed hunting trips to South Texas, and visits to casinos in Louisiana.

Gloria is preceded in her death by her father, James Rufus West; her mother, Winona West Wilson and father, Ralph Wilson; and her former husband, Joe Billy Bradley.

After she left Rosenberg, Gloria immediately made new friendships she treasured. She attended St. Mark’s Episcopal Church in San Marcos, where the Rev. Dr. Ben Nelson and the church family welcomed her with loving arms. Among special relationships she developed were with her caregivers, Clairissa Ann Garza, Melissa Zertuche, Veronica Hernandez, Ester Garza, and Domingo Alvarado.

Please visit Gloria’s memorial website at www.gloriawestbradley.com to see pictures of her life and leave a memory. A celebration of life will be held in Gloria’s memory in the Spring of 2021.