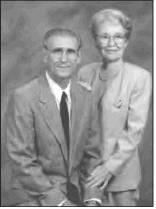 Arthur attended Austin Community College and Southwest Texas State University. He enlisted in the U.S. Army in 1949 and was stationed in Germany. He served in both the Korean Conflict and the Vietnam Era, and retired from the military after 25 years. He and his late wife, Gloria were married on Aug. 5, 1951 and enjoyed 59 years of marriage.

He was a member of the First United Methodist Church in San Marcos, the VFW, Retired Officers Association, and a life member in the National Order of Battlefield Commissions.

Family will receive friends at Pennington Funeral Home at 10 a.m., followed by a Celebration of Arthur’s life at 11 a.m. on Thursday, June 14, 2018, in the Pennington Memorial Chapel, with the Rev. Jarrell Sharp officiating. Arthur will be laid to rest, with full military honors, at Fort Sam Houston National Cemetery in San Antonio, at 9:30 a.m., on Monday, June 18, 2018.