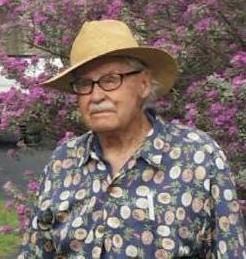 Thomas Anger passed away on July 1. He was sitting on his porch in Wimberley watching the deer, twilight time…veils of deepening blue.

Thos was born in Savannah, Georgia, but got to Texas as quick as he could. He went to school in Beaumont, and at age 17 went to work for Sun Oil Co. as mate on an oil tanker. He worked for Sun Oil in various capacities for 50 years and finished his career in Liberty at the terminal there. He was the last employee to work for Sun for 50 years and enjoyed the company flying him and his wife, Margaret, on the corporate jet to Philadephia and New York at the end of his career for a vacation.

Thos enjoyed hunting with his trusty Ithaca 12-gauge magnum, eating oysters and stock market speculation. He spent his final years in Wimberley, Texas, after his wife died in Katy in 2004.

He is preceded in death by daughter Teri (Tom’s twin) wife Margaret, son Tony, and daughter Margaret. He is survived by son Tom also of Wimberley and Solana Beach, California.

Thomas is interned in San Marcos City cemetery under a great cedar watched over by the resident deer.