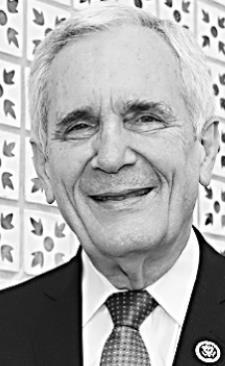 Marking this twentieth 9/11 anniversary, we are mindful of its horrors and sustained by the memory of its heroes, especially first responders who put service ahead of self. Today, in a time of so many divisive forces, we are stronger when we remember what binds us. We draw inspiration from the way our Nation — all of us, as citizens and neighbors — came together after the tragedy on 9/11. That is the spirit evident yesterday when the City of San Marcos and the San Marcos Fire Department held a solemn remembrance, followed by the first responders’ memorial stair climb.

Twenty years ago, at 9:51 a.m. on September 11, 2001, I was working in Washington when the alarm sounded and Capitol police instructed us to evac uate. Once roads and sidewalks emptied, the usually frantic pace of Washington was replaced with a somber, quiet city. Only the occasional siren, the roar of jet fighters, and whirling helicopter blades punctured the silence.

The U.S. Capitol, federal buildings, and landmarks were all cordoned off. Some were blocked with flares, others with more substantial barriers or squad cars positioned to let no vehicle pass. Every law enforcement officer who had ever served seemed to have been recalled for well-armed duty. At the Tidal Basin, I was struck by the sight of gray smoke from the Pentagon wafting up from behind the white marble Jefferson Memorial.

That evening, I joined fellow Members of Congress on the Capitol steps where Abraham Lincoln had long ago taken the oath to lead a deeply divided nation. We pledged to work together to resolve this crisis and raised our voices in an impromptu rendition of “God Bless America.”

As we remember the memory of those lost as a result of the attacks on that day, we honor their sacrifice by working together to help each other to heal and succeed. And let us especially reflect on the service and sacrifice of all those who served in Afghanistan, and resolve, as my office continues our efforts to ensure that those who risked their lives in Afghanistan to protect American lives are evacuated to safety, with their families.

The rights we hold, and the peace that we enjoy, were hard-won. On battlefields, in civil rights marches, and at the ballot box. Protecting those rights — whether the right to vote or freedom of speech — often necessitates exercising them fearlessly. That includes vigilantly protecting the right to dissenting speech and never tolerating violence.

But as many seek to divide neighbor from neighbor, and to convince us that the strength of our community’s diversity is somehow our weakness, we can bring the unity they would like to deny us. It starts with standing up together for the safety and security of all of our neighbors. America is stronger because of its diversity, including a diversity of political opinions, so long as we show respect for one another.

Let’s recall the inscription on the walls of the Lincoln memorial. To a Nation at war with itself, Lincoln urged: “With malice toward none; with charity for all; with firmness in the right, as God gives us to see the right, let us strive on to finish the work we are in; to bind up the nation’s wounds; to care for him who shall have borne the battle, and for his widow, and his orphan — to do all which may achieve and cherish a just, and a lasting peace, among ourselves, and with all nations.”

May we recommit to that mission, as we are shaken daily by attempts to hollow out our founding values and slide into malice or worse. We must together speak out for our Nation’s true tenets and against encroaching authoritarianism, domestic terrorism, violence, and acts of hate and racism.

And may we continue to honor those who paid the ultimate sacrifice and those who struggle to this day. To never forget what has been paid for our liberty, never surrender these precious democratic freedoms, and firmly resist those who would divide us against one another.