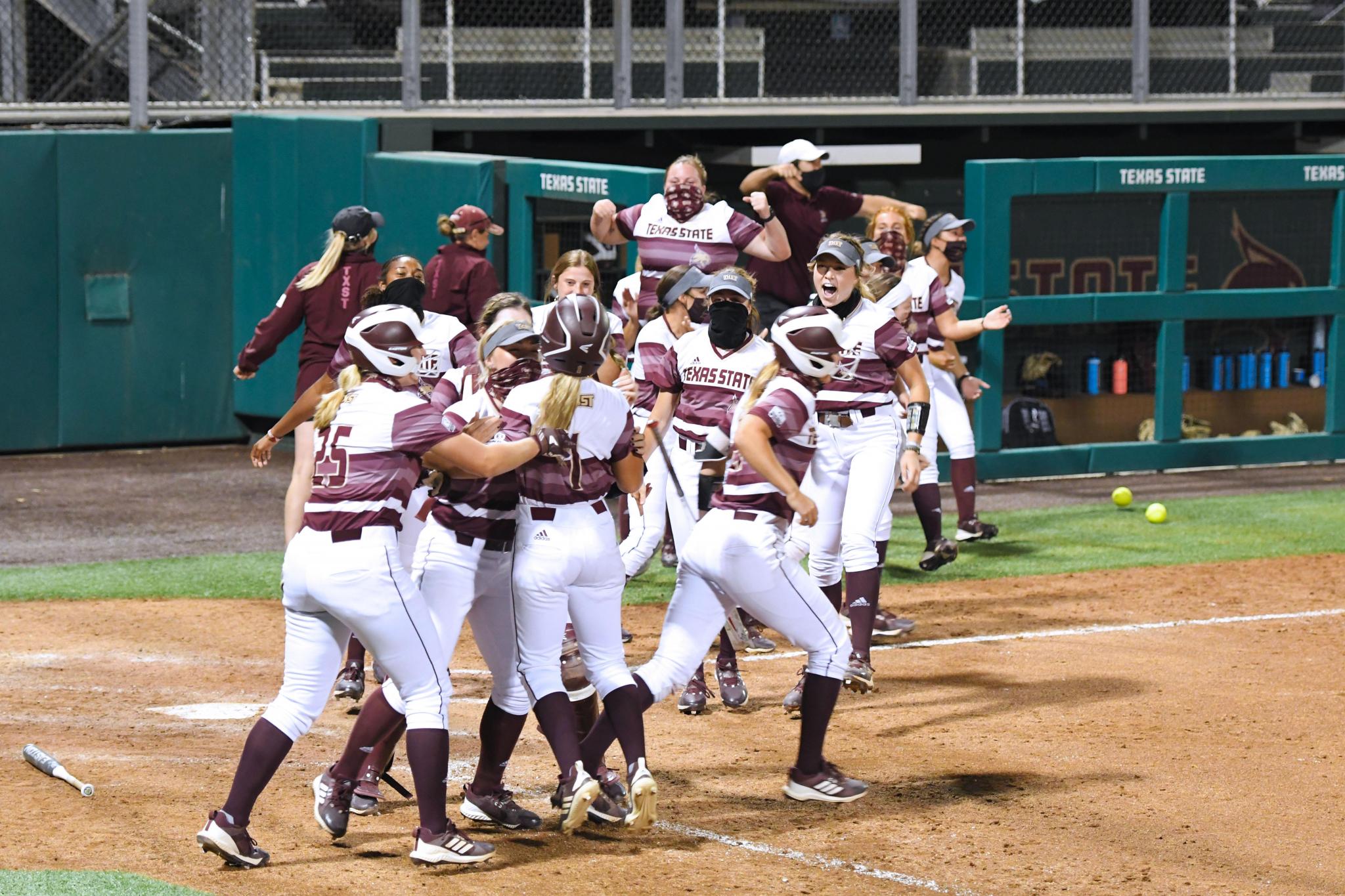 ‘Cats down Aggies on walk-off double from Vanderford

In what ended up being the last game of the 2020 softball season, Texas State fell on the road to Texas A&M, 2-1.

The loss to the Aggies on March 30, 2020, was an example of the mentality that the Bobcats had all season. They could compete with the big-name programs. They could keep the score close. But the team rarely pulled off the win. Texas State went 2-6 against Power 5 opponents last season. Five of the losses were decided by two runs or less.

The maroon and gold aren’t just competing with tough opponents this year, though. They’re beating them. The No. 25 Bobcats improved to 4-3 against Power 5 opponents on Tuesday night when they took out the Aggies, who received votes in the USA Today/NFCA Coaches poll, 7-6 at home.

“Both teams are in a much better spot this year,” Texas State head coach Ricci Woodard said. “And so you know, this game could have gone either way for either one of us, those are two good buckets battling it out. It came down to, probably, which team got to be the last hitting team and, probably, had the momentum going into that last inning. And I felt like we had the right people up at the right time.”

The hosts got off to a big lead early. Freshman second baseman Sara Vanderford swung for an RBI double down the left field line in the bottom of the first inning. Senior first baseman Hailey MacKay did the same two at-bats later, scoring Vanderford and putting the Bobcats up 2-0.

Texas A&M (25-9, 4-5 SEC) got a run back in the next frame, but MacKay bounced another double off the left centerfield wall with the bases loaded in the third, bringing all three runners across. A single from sophomore catcher Cat Crenek advanced MacKay to third base, causing the Aggies to switch pitchers. The visitors tried picking off Crenek stealing second base, but the throw was off the mark, allowing MacKay to reach home unearned and give Texas State a 6-1 advantage.

“I think we’re so much grittier than we’ve ever been, at least in my time here,” MacKay said. “And it’s just, we’re tough to beat when you play like that.”

Texas A&M made a comeback, though, getting another run back in the top of the fourth. Bobcats junior starting pitcher Meagan King began to fade in the fifth and the Aggies took advantage, scoring four runs and tying the game up at 6-6.

Both teams went hitless in the sixth inning. Texas State freshman right-handed reliever Jessica Mullins kept the visitors off the bags again in the seventh, allowing the hosts a chance to put the game away.

Junior right fielder Kylie George earned a single that bounced over the head of Texas A&M’s shortstop, putting the game-winning run on base and bringing up the team’s leading slugger in Vanderford.

“I read this thing the other day about not making the moment bigger than it is. So that was really all that was going through my head,” Vanderford said. “And then the stands got loud, everybody got loud, so I went and talked to ‘Granny’ (MacKay) over here and she calmed me down and just said, ‘Don’t make the moment bigger than it is. You’ve been doing it for 17 years, all your life, so it’s not different than it was five years ago, six years ago, 10 years ago. This is what you play for.’”

“There was honestly never a doubt in my mind that we were going to win that game. And just to do it like that, I mean, it just feels so good,” MacKay said. “For me, being a super senior, just to come back and have a chance to play again and win games like this is why I did it.”

Mullins earned the win, improving to 12-2 after striking out three, allowing one hit, two walks and no earned runs in the final 3.0 innings of the game. The victory extends the maroon and gold’s winning streak to 18-straight, tying the program record for the longest ever.

Texas State (25-3, 8-0 Sun Belt), which was ranked in every national poll this week for the first time since 2018, will look to break the record on Friday at 6 p.m. in the first game of its series against South Alabama (18-11, 6-3) inside Bobcat Softball Stadium.

“I don’t think I could be any more confident in this team,” Woodard said. “I mean, they’ve done just about everything I could have asked them to do. I don’t think there’s a piece that’s missing, you know, they just keep going at it every single day. And again, I couldn’t be more proud of them.”