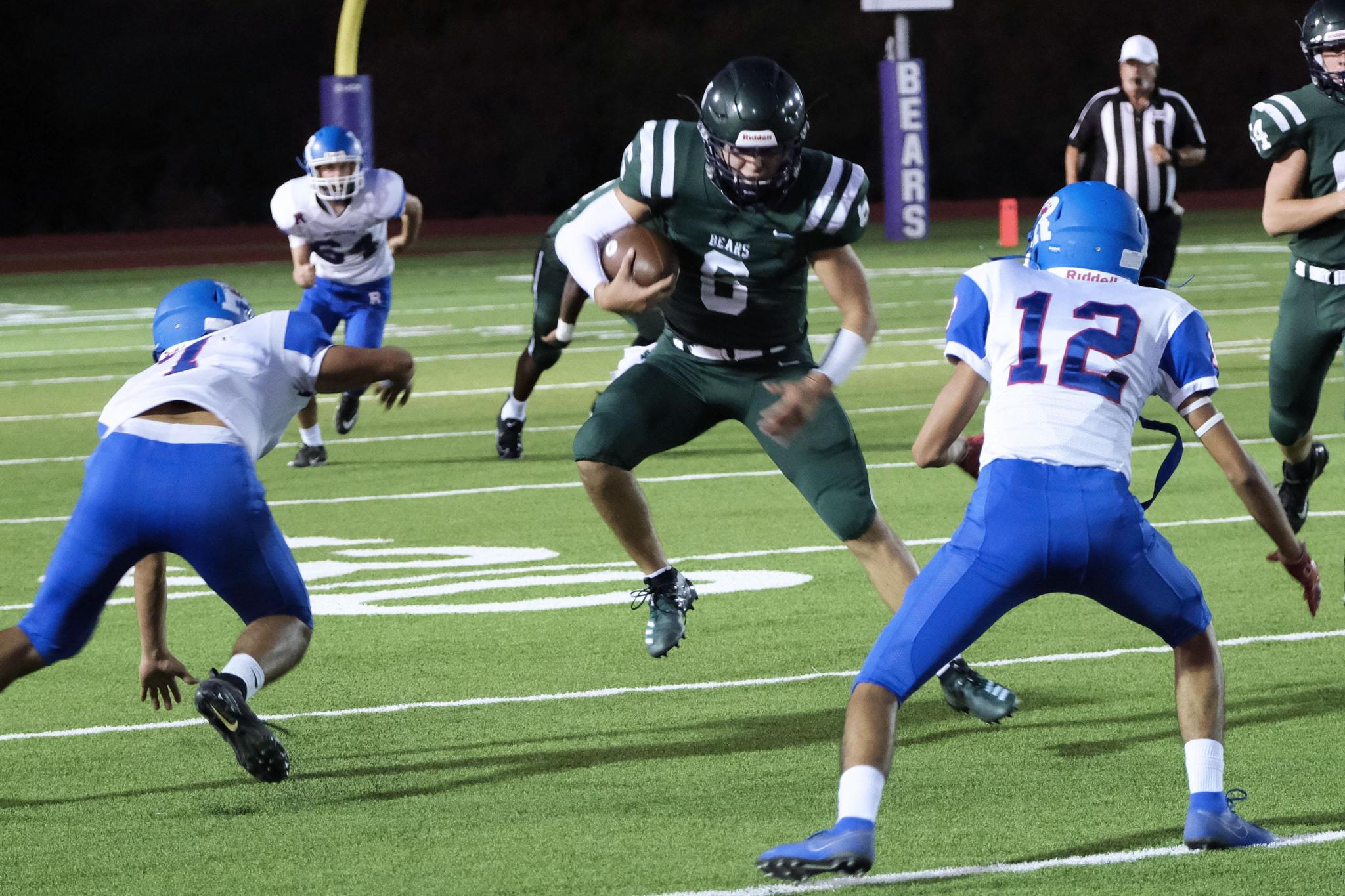 It was homecoming night for the Bears (4-1) and with alumni, friends and family in attendance supporting. The celebrated by grabbing a win in front of its home crowd.

“I’m feeling great, it felt great, my brother’s in the crowd, some old seniors, so it feels good to win with their support,” junior running back Robby Newman said. “It was a great turnout. I try not to pay too much attention to the fans but I'd be lying if I said I don't at all … it was a good crowd and good pep rally today, too, so that probably helped.”

After electing to receive, the hosts came out aggressive, going for it on consecutive fourth downs. But SMA only converted half of its attempts.

St. Gerard made it known they were trying to establish the ground game early by running eight-straight run plays to start the game. Sophomore running back Jay Johnson picked up 40 yards on six carries in the opening drive. It was capped off by a six-yard touchdown run by senior quarterback Ricki Mesquiti who rumbled his way down the middle of the Bears’ defense establishing a 6-0 lead early in the first quarter.

The visitors missed the field goal, leaving them stuck at six.

SMA responded with a touchdown of its own and only took four plays to get it done. The Bears opened their second drive with a 34-yard pass from senior quarterback Bryce Patterson to junior wide receiver Gino Dippolino. Newman picked up a few more yards on the next play, followed by an incomplete pass. With all eyes on the running back, Patterson rolled out of the pocket and launched a 27-yard touchdown pass over the middle to senior tight end Zach Whitaker for the first score of the night.

The Royals continued to pound the ball on the ground but San Marcos recovered a fumble on St. Gerard’s 47-yard line with eight minutes remaining in the second quarter. After a big stop from the defense, Patterson picked up 17-yards using his legs. Newman then ran up the middle, broke two tackles with elusive spin moves and found himself celebrating with his team in the end zone after 34 yards of hardnose running.

San Marcos put the visitors on its own one-yard line to start the drive after a muffed punt recovery. The Royals were just trying to get out of the end zone, but it turned into the longest touchdown of the game. A quarterback keeper shifted the defense and opened up the left sideline for Mesquiti, where he took off and avoided tacklers diving at his feet for a 98-yard touchdown. Trailing by two, St. Gerard decided to go for the two-point conversion, but came up short on Johnson’s run attempt.

Both teams made big plays in the first half, but it was the defense that separated them in the end. San Marcos forced two turnovers on the first two drives by its opponent. An interception by senior linebacker Animaan Singh set the tone for the second half. St. Gerard’s Jay Johnson countered on the Bears’ first drive with a diving interception over the intended wide receiver down the left sideline. The hosts’ defense trotted back onto the field to replicate the results of the last drive. This time it was senior defensive back Daven Meredith picking up his team's second fumble recovery. The offense retaliated with four double-digit yardage plays, including Patterson’s 23-yard touchdown, to take a 21-12 lead.

“Fortunately this year, we're able to make some adjustments and the kids understand,” head coach Les Davis said. “This offense they were doing is something you don't see very often, so it's hard to simulate. A little shaky at the beginning, but I'm proud of the kids.”

The two turnovers didn't affect the Royals as they responded with a 67-yard score from Johnson. His first of the night. St. Gerard elected to go for two once again, but this time converted on a tipped pass that landed in the tight end's hands. The score cut the home team’s lead to just one.

With nine minutes remaining in the fourth quarter, Meredith broke out a long kick return, spotting the ball on St. Gerard’s 41-yard line. A facemask, plus more yardage from Newman, allowed them to get to the eigh but the Royals made two clutch stops bringing up fourth down. With the wind not blowing in its favor, SMA chose to go for it and an incomplete pass ended the drive.

With a chance to take the lead back since early in the first quarter, the visitors failed to capitalize on key situations, going three-and-out in their last two drives of the game. While the offense struggled to get out of its own territory, the home team used its final two drives to grab the win.

Patterson and freshman running back Cole Krackau both ran it in for the final scores of the night, ending the game at 35-20 in favor of the hosts.

Newman was the workhorse that allowed the run-pass option to get going but he credited the blocking of his offensive line for his success in Friday’s game.

“It’s just my O-line to be honest,'' Newman said. “O-line does everything, I love them so much, you don’t even know. I know a lot of people say that but the O-line makes it easy for me.”

This win starts a new winning streak for the hosts, with one of their toughest matchups coming next week. The Bears will be at home against Sacred Heart (2-2) on Friday, Oct. 4 at 7:30 p.m.

“Sacred Heart is always a good football team,” Davis said. “Normally they execute very well, their kids are very aggressive and they just don’t make a lot of mistakes. So we gotta protect the football and then go out and execute ourselves.”