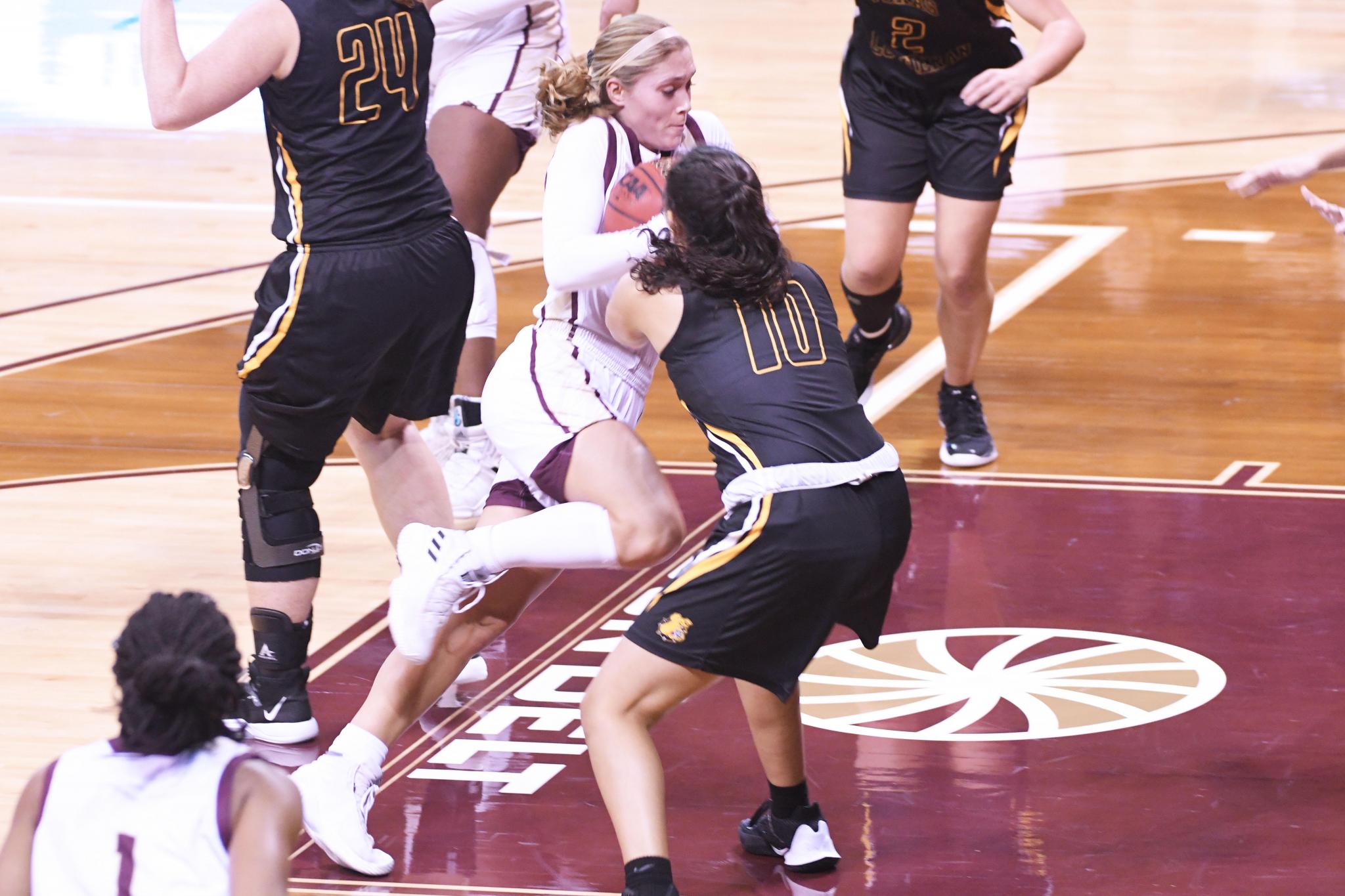 Texas State couldn’t stave off a shooting outburst from Morgan State on Wednesday, falling in Baltimore, 72-62.

“Overall, I think this is a tough loss, largely because we pride ourselves on defense and we struggled defensively today,” head coach Zenarae Antoine said. “(The Lady Bears) shot outside of themselves today, meaning considerably well considering their initial numbers. But in the game, my hope was that we were going to make the adjustment in order to stop their ability to be able to shoot the ball as well as they did. And we really struggled doing that.”

The Bobcats (6-3) began the game on a 7-0 run, with jumpshots from junior and sophomore forward Lillie Moore and Da’Nasia Hood and a 3-pointer from senior guard Bailey Holle. The visitors ended the first quarter up 15-8 and extended it to 18-9 early in the second on a trey from Hood.

But Morgan State (4-7) began heating up from outside, draining three triples and adding a free throw to tie the game up at 22-22. The hosts ended the half on a 9-4 run, then hit another four outside shots in the third quarter to hold a 53-44 advantage heading into the final period.

The lead grew to 15 points in the opening minutes of the fourth but 12 combined points from Bailey and fellow senior guard Brooke Holle helped Texas State trim it down to four with 2:43 left on the clock. That’s as close as the Bobcats would get, though, as the Lady Bears pulled away and took the 72-62 win.

“What I did find in this game that I appreciated was our kids really understood that they needed to battle back,” Antoine said. “And they battled hard there towards the end to bring it within two possessions. But, you know, being on the road, with the momentum that (Morgan State) had, we found ourselves on the losing end when the buzzer went off.”

Brooke Holle and Hood tied for a team-high 15 points each, with Brooke also leading with six rebounds and five steals. Junior guard Avionee Alexander did not score, but did dish out seven assists. Morgan State finished the night shooting 10-16 from deep.

Texas State will return to its home state this weekend, traveling to Fort Worth to take on TCU (8-1) on Sunday at noon. The Horned Frogs received one vote in the AP poll released last Sunday.

“I haven’t seen a lot of TCU at this point but what I can tell you is they do a great job of scoring the ball. They also shoot the 3-ball really well — but a little bit different than Morgan State, where it’s not necessarily what their go-to is,” Antoine said. “For TCU, their go-to is their ability to be able to really spread the floor out. The shortest kid that’s going to start for them is 5-(foot)-9, so they’ve got some length, size, height, ability to shoot, manipulate folks with mismatches as well. So we’re really going to have to dig down defensively, hit the reset button, watch film tomorrow, see where we need to improve upon from this past game and then go ahead and dive in deep into the scout for TCU to prepare for this last game before the Christmas holiday.”