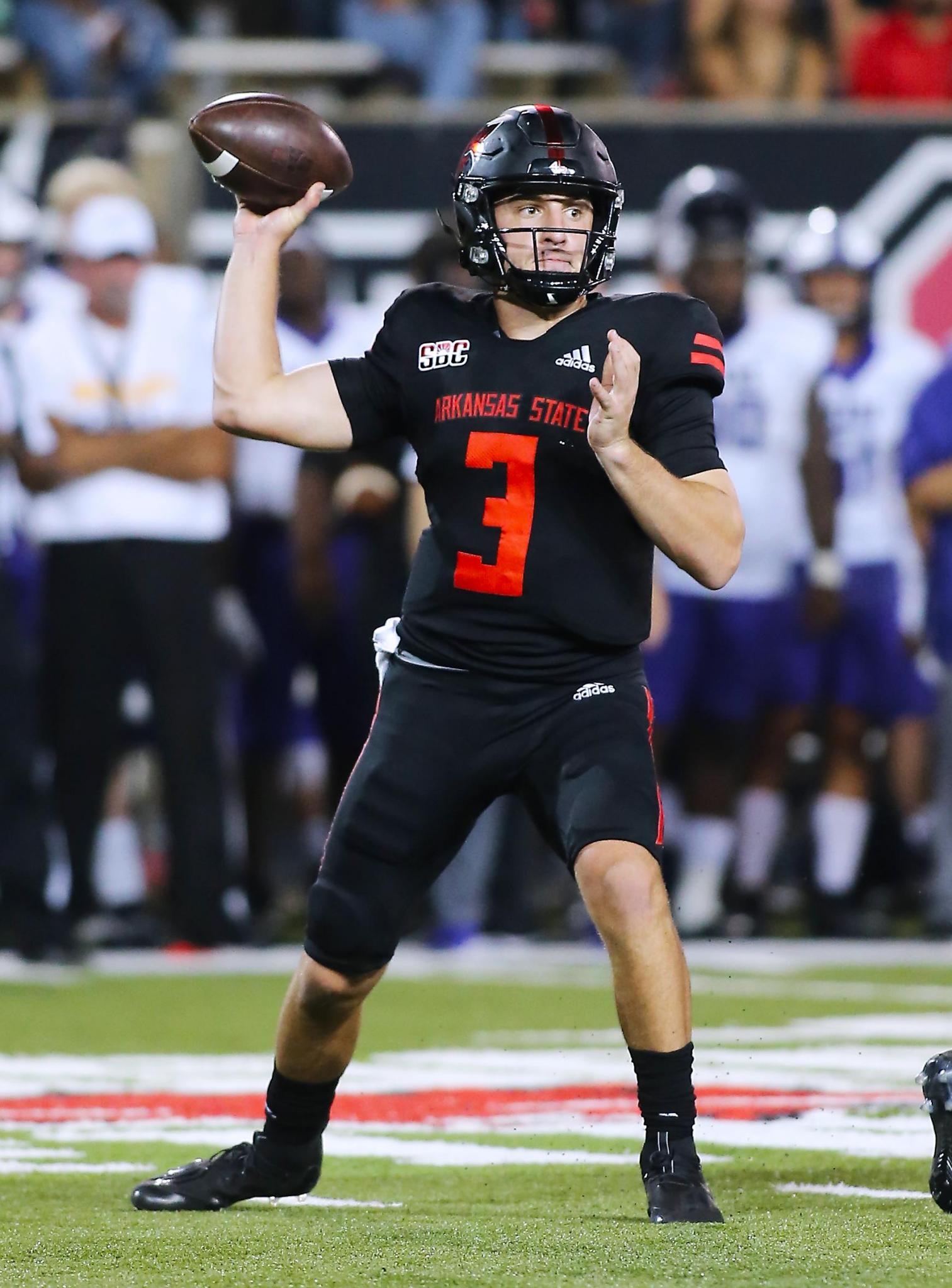 Texas State filled its most recent quarterback vacancy with a former Sun Belt Freshman of the Year.

Head coach Jake Spavital has always kept a competitive quarterback room since taking over the Bobcats. In 2019, he brought in Gresch Jensen and Brady McBride to compete with Tyler Vitt and Jaylen Gipson for the starting job — though, McBride was deemed ineligible to play due to transfer rules at the time. In 2021, Spavital brought in North Carolina State transfer Ty Evans to compete with Vitt and McBride.

With Vitt declining to use his extra “COVID year” of eligibility, Spavital went searching for another signal-caller who could turn up the heat in the position group.

Layne Hatcher announced on Dec. 1 he would enter the transfer portal for a second time. The Little Rock, Ark., native spent his first college season at Alabama in 2018, redshirting on a team that reached the national championship and featured a trio of future NFL starting quarterbacks in Jalen Hurts, Tua Tagovailoa and Mac Jones.

He returned to his home state the next season, transferring to Arkansas State. Now, three years later, he’s on the move again. Mitchell Gladstone of the Arkansas Democrat-Gazette reported on Sunday that Hatcher is heading to Texas State.

“I think I understood more what I was looking for and what I wanted out of the process and how to be a better evaluator,” Hatcher said. “I just felt like it was the best move for my future. I felt really good about Coach Spavital and what he has to offer and who he is.”

Hatcher backed up Logan Bonner in his first three games with the Red Wolves in 2019, relegated to the sideline during the opening two weeks of the season. Bonner suffered a season-ending thumb injury in the third week, though, opening the door for Hatcher to take over as the starter in the final nine games.

Hatcher finished the season with 2,553 yards, 23 touchdowns and nine interceptions on a 68.9 completion percentage, leading Arkansas State to an 8-5 overall record and an appearance in the NOVA Home Loans Arizona Bowl. The quarterback was also voted the Sun Belt Freshman of the Year.

The next season, Bonner returned and then-head coach Blake Anderson chose to use the QBs in a timeshare, playing both in all 11 of the team’s games. Hatcher led the nation gaining 17.74 yards per completion as he totaled ​​2,058 yards, 19 touchdowns and two picks and was recognized as a Sun Belt Honorable Mention.

Anderson left in the offseason for the head coaching job at Utah State. Bonner followed him there and Hatcher joined forces with new Red Wolves head coach Butch Jones, who had been an offensive assistant on Alabama’s coaching staff while Hatcher was there.

Jones, though, preferred FSU transfer James Blackman behind center at the beginning of the year. Hatcher supplanted Blackman in the second half of the season, starting in the final six games and throwing for 2,423 yards, 19 TDs and 13 interceptions.

Spavital reached out to Hatcher soon after the quarterback entered the transfer portal. It didn’t take long for Hatcher to see the appeal of playing in San Marcos.

“It was great (talking to Spavital). We’re both just football junkies that love the game and love studying it and try to make it better,” Hatcher said. “I think it’s just a place that’s right on the verge of having a lot of success. You know, they have a lot of good players. And just the offensive scheme with Coach Spav, I believe in what he thinks and how he wants to run an offense.”

He’ll compete with McBride and Evans for the starting QB job this offseason with two years of eligibility left. He’s ready for the challenge — it’s one he’s faced for most of his career.

“I just want to be the best guy I can for the team and compete the best way I can,” Hatcher said. “(I’m excited about) I think just a new opportunity, a new chance to go get better.”