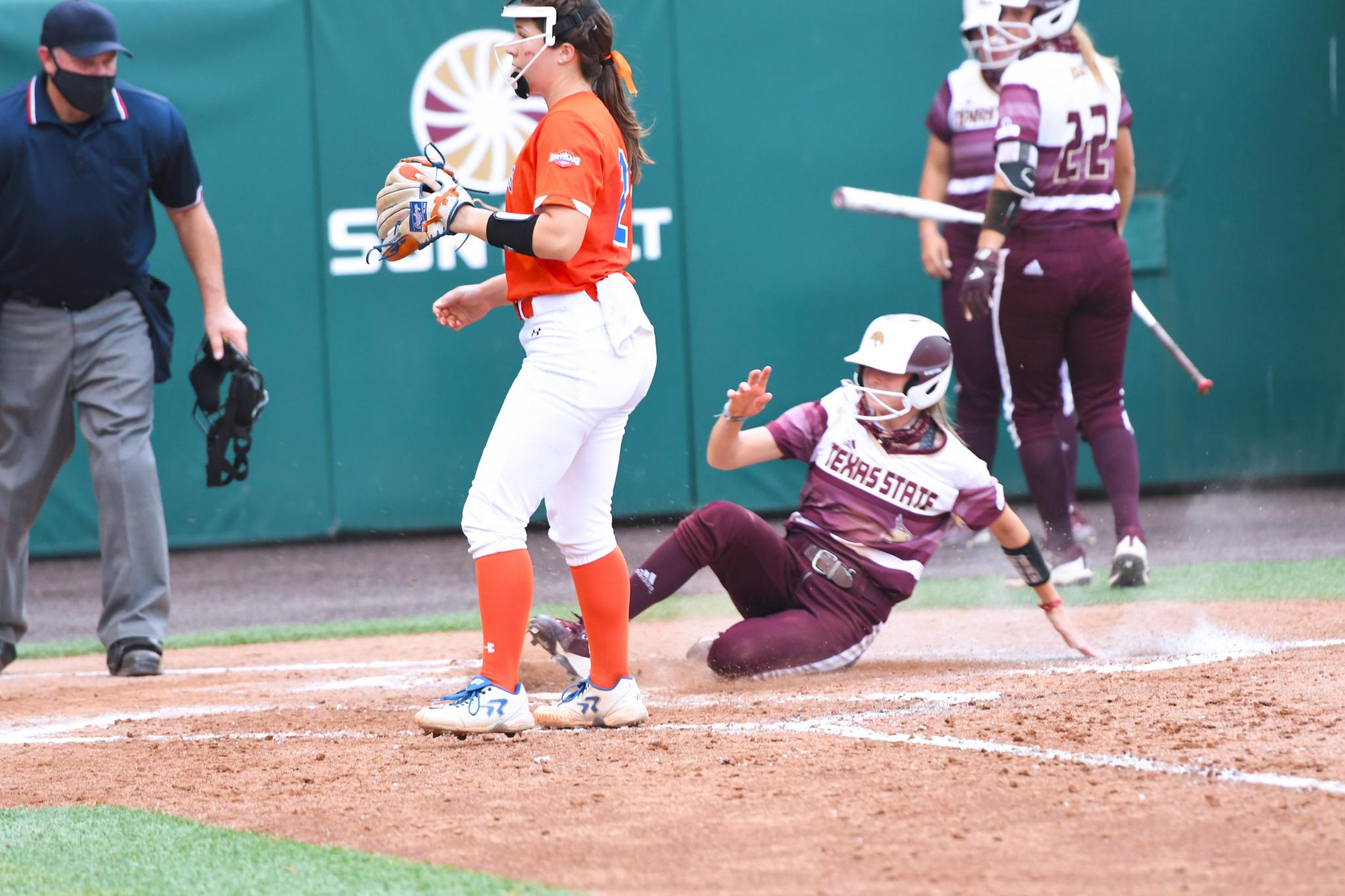 Texas State won their final non-conference game of the regular season, but also lost some of its fire.

The hosts continued its strong defensive stretch, holding the Huskies (19-13, 12-9 Southland) scoreless through the first six innings of the game. A two-RBI home run by HBU freshman left fielder Jasie Roberts in the top of the seventh ended a 28-inning streak of Texas State not allowing a run.

Bobcats freshman right-handed pitcher Jessica Mullins (15-6) received the win, allowing two hits, one hit by pitch and no runs while striking out seven in 5.0 innings of work.

“I think definitely communicating and keeping energy on the field and just letting your pitcher know that you have her back no matter what,” freshman centerfielder Piper Randolph said. “It kind of relieves a lot of pressure because being a pitcher is very stressful.”

The team got runners on base frequently throughout the night, drawing six walks and connecting for three hits. Randolph earned the first score of the game, reaching home on a groundout by freshman second baseman Sara Vanderford. She set the table again in the fifth inning, singling to move Hannah Earls to third base, stealing second, advancing to third on a wild pitch that allowed Earls to score, then crossing the dish on a sacrifice fly from junior shortstop Tara Oltmann.

“We've been talked to a lot by Coach Woodard about knowing our role,” Randolph said. “And obviously, with the speed we have, our role is to get on base, even if that is drawing a walk or just putting it on the ground and running it out and trying to force an error, or even just getting a base fit by placing it and finding a hole. And I think Hannah and I have both been working on kind of exemplifying that and both finding a way on because we know that, Tara or (senior first baseman) Hailey (MacKay) or Baylee or whoever's behind us can find a way to score us.”

Lemons added another RBI in the fourth, using a base hit to bring sophomore catcher Cat Crenek across.

“Before that swing, I had hit one to the third baseman and I was like, ‘Man, that was right there, I should have hit that harder,’” Lemons said. “But they said illegal pitch, so I came back and I was just focused on getting a base hit somewhere within — I mean, Coach Woodard and I have been working right side and I knew she wasn't going to come necessarily inside. So looking away and I just saw a pitch that I could drive.”

The Bobcats never seemed to build up much momentum, though, swinging just 1-9 with runners in scoring position and leaving five on base.

“I think we're showing up and we're playing just well enough to beat the team we're playing,” Woodard said. “And so yeah, I go back to the (Texas) A&M and the Baylor game and even the (Louisiana) games, you know, I think we played well in those games. And so all I can hope is that when we show up and get off the bus at Troy that you know that team is going to show up again.”

Texas State (31-9, 12-5 Sun Belt) visits the Trojans (32-10, 15-3) for a three-game series this weekend, beginning Friday at 6 p.m. A sweep for the Bobcats would move them into second place in the league heading into the final series of the regular season.

“Man, going into this series, it's just what I thought it would be,” Woodard said. “It's a matchup that both teams need badly. And so, I think it'll be fun.”