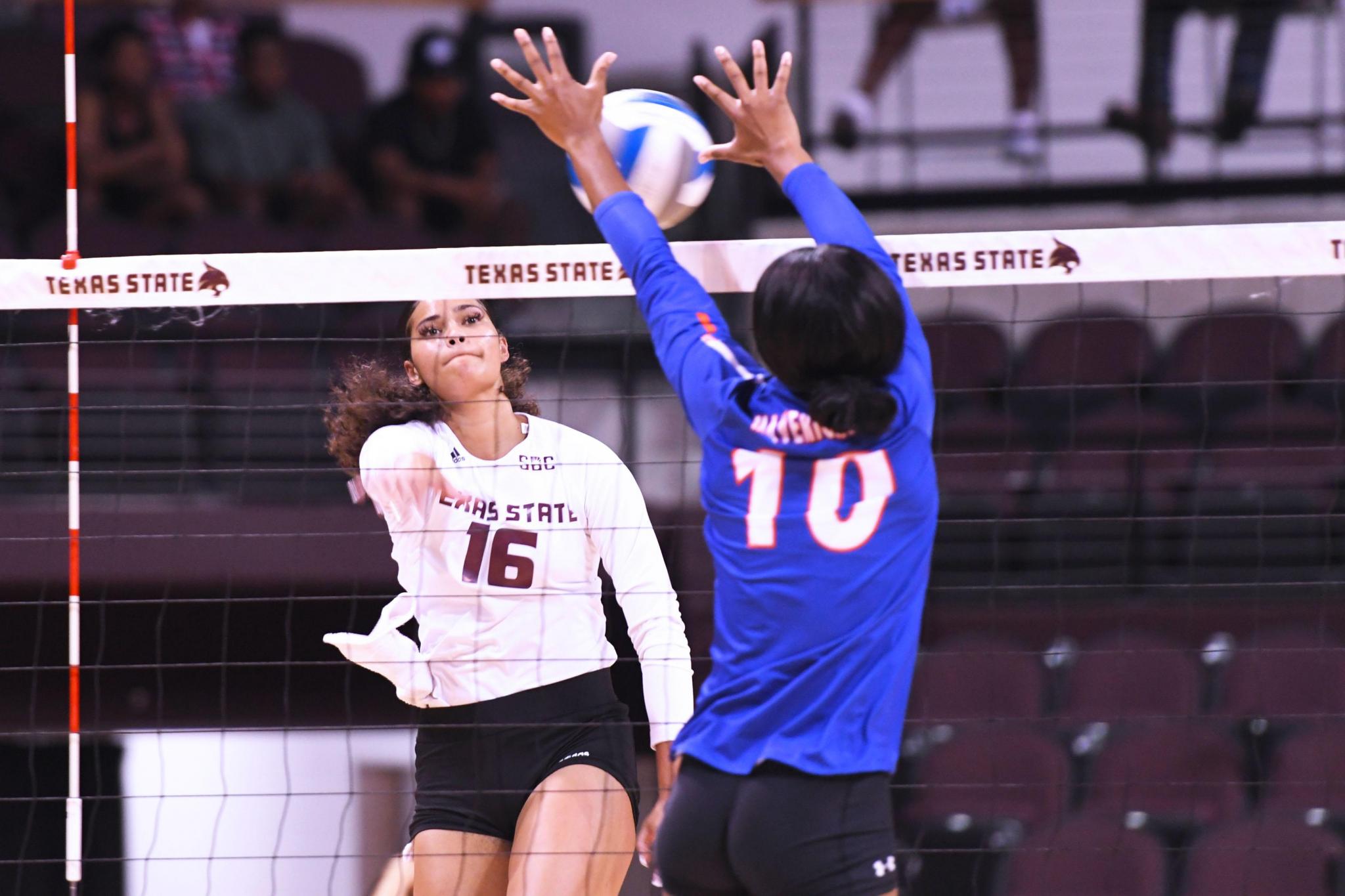 A 4-0 run helped Texas State get its groove back.

Trailing 23-21 in the first set of Thursday’s match against UT Arlington inside Strahan Arena, Bobcats head coach Sean Huiet called his second and final timeout. The maroon and gold had been gifting the Mavericks points throughout the framing, getting blocked four times and committing service errors.

But the hosts hung tough. UTA’s next serve didn’t make it over the net, cutting the team’s lead to one. Graduate outside hitter Jada Gardner knotted the score up with a kill on the next point, causing the visitors to call their first timeout. Gardner scored the next point to give Texas State a 24-23 lead and the Mavericks called their second timeout.

A spike from Gardner on the next point ricocheted off UTA’s defensive specialist and sailed over the hosts’ back line of defenders. Junior defensive specialist Kayla Granado saved it with a diving dig and fifth-year senior libero Brooke Johnson set up Gardner for the final kill, taking the set, 25-21.

“I just told them, I was just really proud,” Huiet said. “I thought set one could have gone either way and for us to come back after being down three there late and taking that set, I thought that was the difference in the momentum that we needed.”

The comeback emboldened the hosts, especially Janell Fitzgerald. The senior outside hitter struggled in the team’s last match against Louisiana, posting three kills and four errors on 15 attempts in two sets, and was off to a shaky start on Thursday with three kills and two errors on eight shots in the first set.

But Fitzgerald came alive after in the second set, earning kills on four of the team’s first six points. She finished the match with a double-double, producing 12 digs and a team-high 17 kills.

“I was confident. That's literally my biggest thing, just that mental game, being confident. And when I feel like my team is counting on me, that's whenever I can step up and play for them,” Fitzgerald said. “We were ready to take on whatever we needed to take on and do the little things. I think we've been working really hard in practice and so, it's finally showing up.”

The Bobcats also got a major lift from senior setter Emily DeWalt, who had one of her best games of the season. With Gardner and Fitzgerald clicking on offense, UTA had a tendency to overcommit for blocks at the pins. DeWalt kept the defense honest with dumps to open areas of the court. She finished the night with five kills and led the team with 41 assists and three blocks.

“I think for us, it's just realizing that even though this isn't how we're normally starting conference off, we have to learn from every situation that we've had,” DeWalt said. “And I do think that, even though in the losses, we've been able to learn and get better at different things and then we come back and we capitalize when we get the opportunity to do it.”

Gardner added another 15 kills and nine digs. Johnson finished with 17 digs and served for five aces.

The Bobcats haven’t won any of their Saturday conference matches yet this season. Huiet hopes the team’s confidence carries over and that an extra day between games will keep his players rested.

“We need to figure that out, the back-to-back side,” Huiet said. “But it'll be good just to watch a little video. We're going to do a little community service in the morning, then head up to Arlington, have a fun team dinner and rest our bodies a little bit so we're fresh for Saturday. But we're gonna watch the video and see some things because, again, I thought we played really well but I think there are some things that we can improve to do a little bit more on Saturday.”