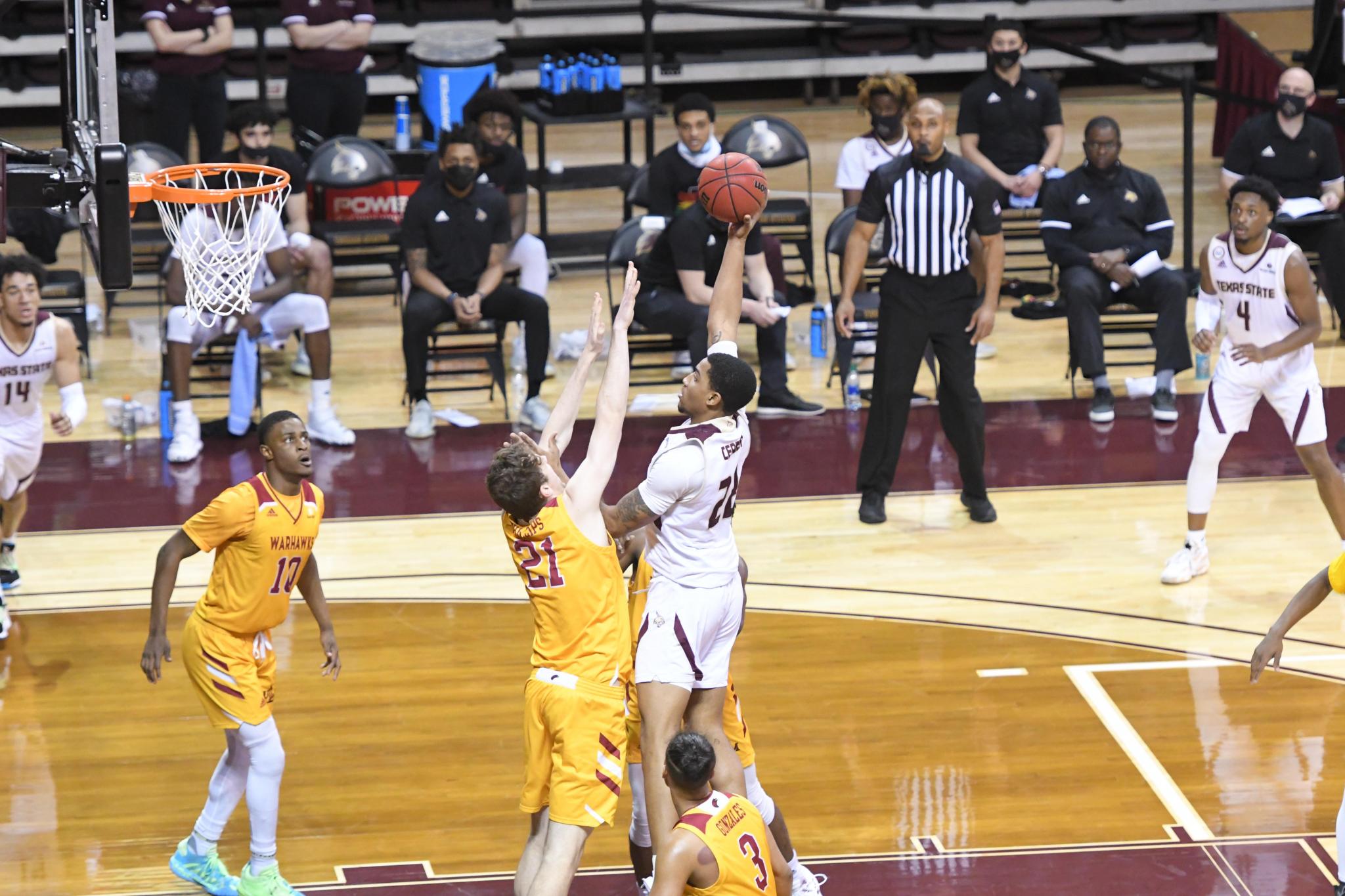 Bobcats close out regular season with win over Warhawks

Nighael Ceaser didn’t know who Nijal Pearson was when he requested to wear the No. 22 jersey at Texas State.

The Houston native wore the number during his two seasons at Collin College from 2018-20. He wanted to keep wearing it when he joined the Bobcats. Pearson’s number hadn’t been retired yet and technically, according to Director of Operations Alex Hausladen, the school doesn’t retire numbers, it just honors them. If an incoming recruit really wanted No. 42, which hangs in the Strahan Arena rafters in honor of former Bobcat forward Jeff Foster (1995-99), they could hypothetically have it.

Ceaser didn’t realize the number belonged to the program’s all-time leading scorer until after he arrived in San Marcos. But when Texas State’s home game against Louisiana-Monroe went down to the wire Saturday night, the team turned to No. 22 like it had in years past as Ceaser delivered clutch plays to earn a 61-57 win in the 2020-21 regular season finale.

“He's a junkyard dog, that's what I like to call this guy,” junior guard Caleb Asberry said. “You know, he scraps, blocks shots, he does the stuff that nobody wants to do — take charges, all that.”

The Bobcats already clinched the No. 1 West Division seed in the upcoming Sun Belt tournament with Monday’s win over Arkansas State and picked up the conference regular season championship with Friday’s win over the Warhawks. With both accomplishments locked up, associate head coach Bennie Seltzer chose to cut back on his starters’ minutes, pulling junior guard Mason Harrell from the game and bringing senior forward Isiah Small in off the bench. None of the maroon and gold's players reached 30 minutes during the contest.

With Harrell resting and redshirt senior guard Marlin Davis still recovering from a right knee injury, Seltzer gave freshman Dylan Dawson the start at point guard and also played walk-on freshman guard Deuce Guidry for significant minutes. Both made the most of their opportunities.

Dawson made sharp plays to keep the hosts afloat, leading Texas State with four assists. Guidry, who hadn’t seen the floor since the season opener against Mary Hardin-Baylor on Nov. 25, dropped in a 3-pointer from the left wing to give the Bobcats their largest lead of the night at 18-10.

ULM countered with a 13-0 run, taking a five-point lead. But Guidry nailed another triple from the right wing to end the stretch and get some momentum back on the hosts’ side. Texas State went into halftime trailing 29-23.

The Bobcats turned things around with a 10-0 run to start the second half, taking a 33-29 edge. But a pair of free throws by Warhawks junior guard Elijah Gonzales put the visitors back in front, 56-55, with 1:12 remaining in the game.

The maroon and gold fed Ceaser on the right block with the next possession. The forward spun over his left shoulder and kissed the ball off the glass to regain the lead. ULM committed a pair of turnovers and was forced to send Asberry to the line with 22.9 seconds on the clock, who made both of his one-and-one free throws.

Ceaser was whistled for a blocking foul on Gonzales, but the guard missed the second of his one-and-one free throws. Ceaser collected the miss and was immediately fouled. The junior missed his foul shot, but collected another miss by the Warhawks. Ceaser made his final two free throws to seal the 61-57 victory.

“Really, I just slowed down and listened to my coaches and just ran the offense,” Ceaser said. “We kept saying, ‘Keep it simple,’ basically. So I kept it simple and it worked.”

Ceaser finished the game with eight points and four boards. Asberry led the team with 19 points and tied redshirt sophomore guard Addison Wallace with a team-high seven board each.

Texas State finishes the regular season at 18-6 overall and 12-3 in league play. The team will travel to Pensacola, Fla., for the Sun Belt tournament next weekend where it will face the winner of the matchup between No. 5 West Division seed Little Rock (11-14, 7-11 conference) and No. 4 East Division seed Appalachian State (13-11, 7-8), which takes place Friday at 7:30 p.m.

“Whomever it is, we're going to try to go 1-0,” Seltzer said. “So we're not going to look too far in advance, knowing that we have a tournament to play, obviously. But we're just going to try to get one day better. We'll be in here tomorrow working on our game.”