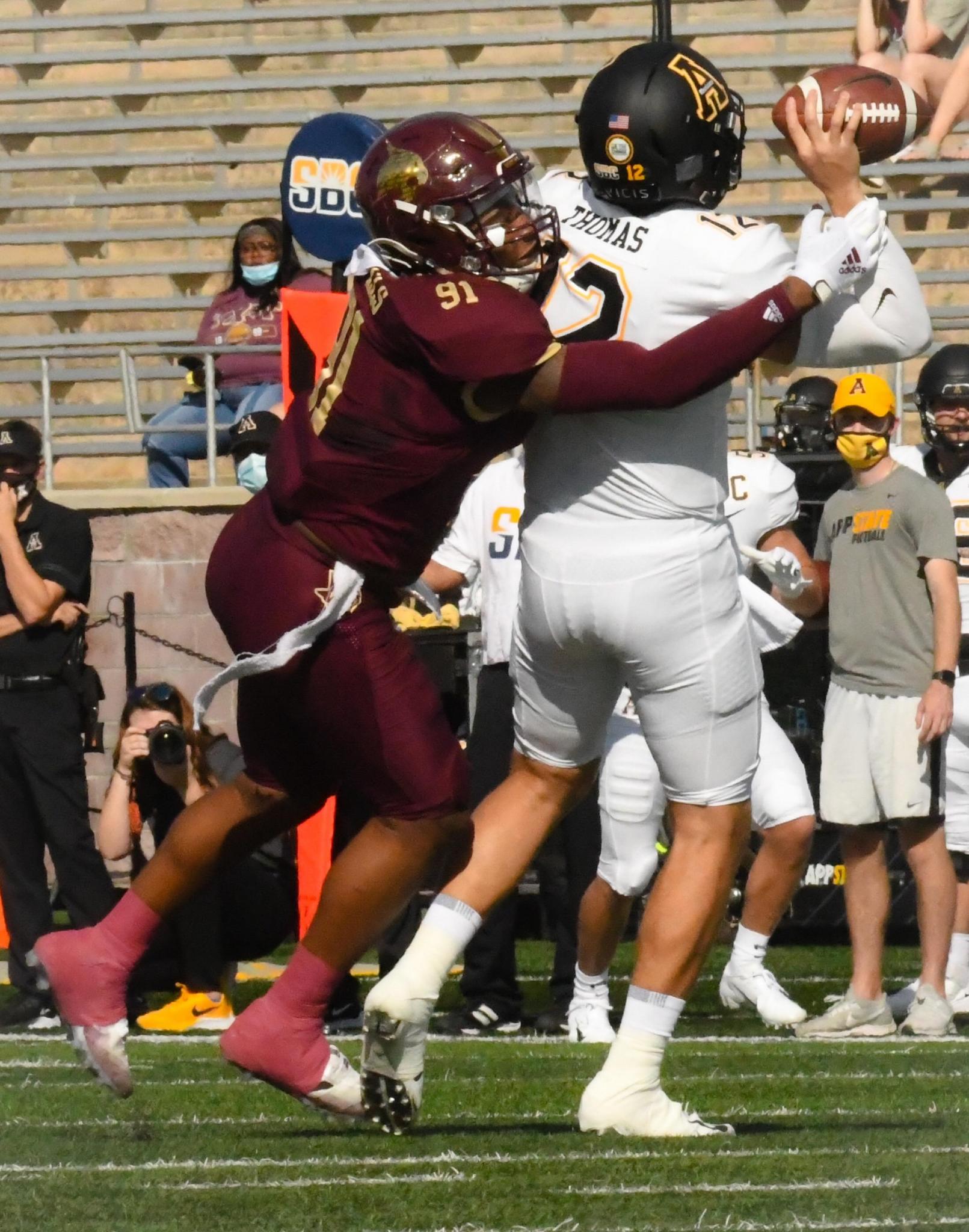 After a first quarter that saw the Bobcats (1-9, 1-5 Sun Belt) net a loss of five yards and trailing 17-7 — their only score coming from a 97-yard kickoff return by senior wide receiver Jeremiah Haydel — the maroon and gold began making big plays against the Eagles (6-2, 4-2).

Texas State put together an 11-play, 75-yard drive that ended with an 11-yard touchdown rush by redshirt freshman running back Calvin Hill. Georgia Southern redshirt senior quarterback Shai Werts was intercepted by junior cornerback Jarron Morris on the first play of the next drive, setting the visitors up on the hosts’ 43-yard line. Junior quarterback Tyler Vitt found junior wide receiver Marcell Barbee over the middle on the next play, who took it to the end zone for a 43-yard score that gave the Bobcats their first lead of the game at 21-20.

But on the team’s next drive, Vitt’s quarterback sneak was stopped short of the first down marker on 4th and 1 for a turnover on downs. Werts scored his third touchdown of the day on the next possession and when the Bobcats got the ball back, Vitt remained on the sideline with his left wrist in a wrap as redshirt sophomore Brady McBride lined up behind center. Vitt did never re-entered the game.

Eagles redshirt freshman kicker Alex Raynor made a 39-yard field goal to begin the third quarter, but McBride trimmed the lead down by launching the ball deep to junior wide receiver Javen Banks for a 59-yard touchdown pass.

Georgia Southern leaned on its ball-control offense to stay in front late in the game, though. The hosts went on a 12-play, 75-yard drive that ran 6:41 off the clock, ending with a 6-yard scoring run by senior running back Wesley Kennedy III. Texas State made it a one-score game again with a 27-yard field goal by redshirt sophomore kicker Seth Keller.

The Bobcats seemed to get a stop on the next drive when Werts through an incomplete pass on 3rd and 12. But the refs controversially flagged redshirt senior linebacker Hal Vinson for roughing the passer despite Vinson using just his hands, making no helmet-to-helmet contact and Werts still having the ball in his hand when Vinson knocked him down. The penalty resulted in a new set of downs for the Eagles, who scored four plays later with a 20-yard field goal from Raynor, leaving just over four minutes left in the game.

McBride tossed a 24-yard touchdown pass to redshirt sophomore wide receiver Jah’Marae Sheread to make it 40-38 with 2:50 left. But Texas State couldn’t get another stop as Georgia Southern ran down the clock to seal the win.

Vitt finished the game completing 12 of 18 passes for 114 yards with one touchdown and two interceptions while McBride went 7 of 13 with 155 yards and two touchdowns. Barbee led the team with five catches for 71 yards to go along with his score. Sophomore running back gained 31 yards on six rushing attempts, but all other Bobcats finished with less than a 4-yard per carry average.

Morris paced the maroon and gold with a career-high 15 tackles, followed by Vinson with nine. Senior linebacker Markeveon Coleman and junior defensive lineman Emmanuel Galvan-Vazquez both earned sacks during the game.

Saturday’s contest marked the final road game for Texas State this season. The team will return to Bobcat Stadium next week for a meeting with Arkansas State (3-5, 1-4) at 2 p.m. The game will be broadcasted on ESPN+.