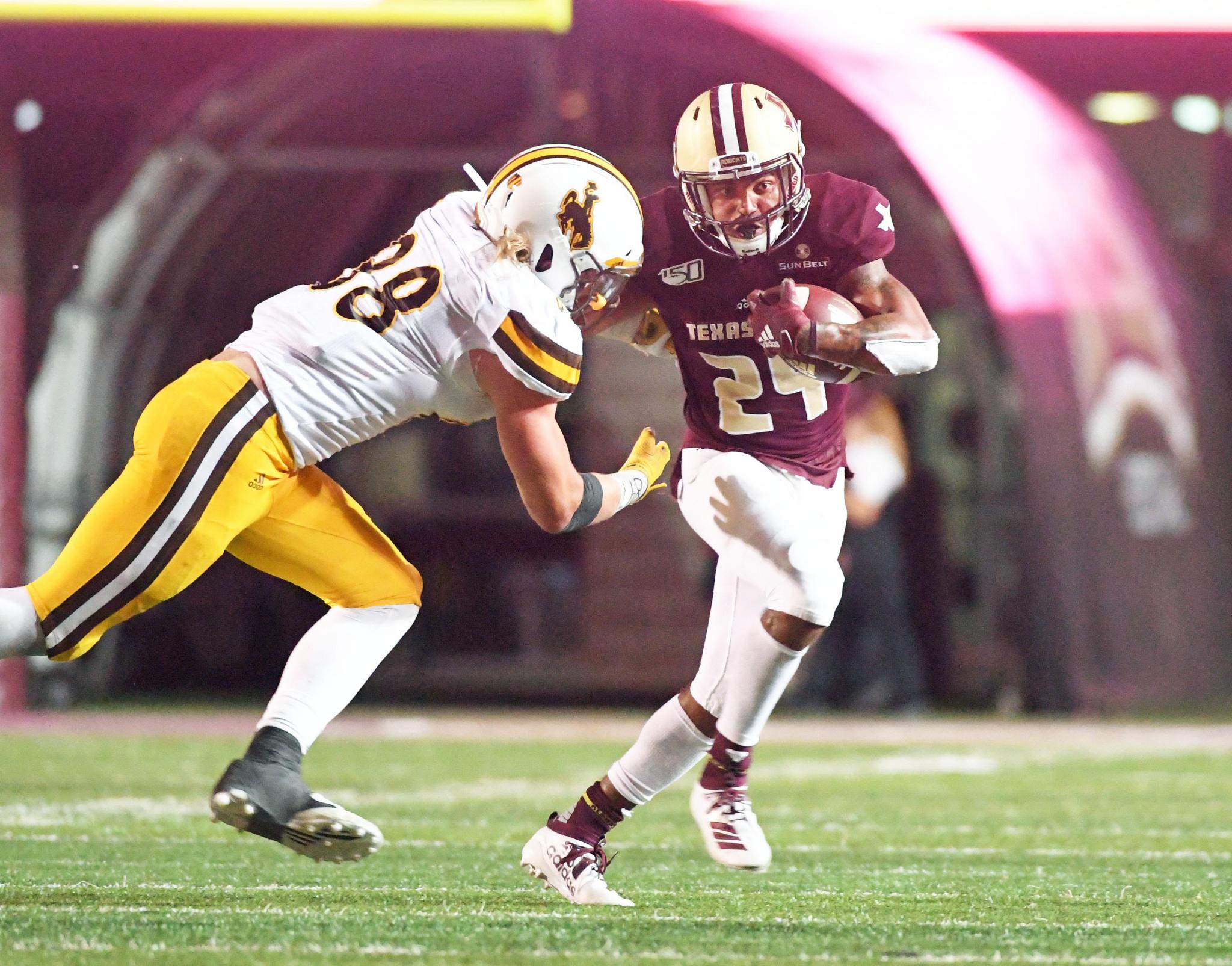 Turnovers are costly. Wyoming makes a living off them.

Missouri outgained Wyoming by 148 yards during its season opener last week, but threw two interceptions and lost a fumble. The Cowboys scored 17 points off the takeaways, leading to a 37-31 victory.

Texas State made the same mistakes Saturday night inside Bobcat Stadium. Junior quarterback Gresch Jensen was intercepted twice by Wyoming’s secondary — including a pick-six — and fumbled the ball away on a sack in the second quarter. The visitors scored 14 points off the takeaways, helping them escape San Marcos with a 23-14 victory.

“To beat (Wyoming), you have to play complete, complimentary, team football. And we didn't,” head coach Jake Spavital said. “But it goes down to what we're talking about, like the smart efficient football that we're all about. And you can't turn the ball over three times, especially throw a pick-six, especially versus a team that prides themselves in minimizing mistakes and capitalizing mistakes and a ball-control team.”

The Bobcats’ main focus was to not play from behind on the scoreboard. Wyoming’s wouldn’t be able to ground and pound at its signature slow tempo if it needed to score in a hurry. The plan worked at first.

Texas State’s defense forced the Cowboys to punt on their first drive of the game, and the Bobcats took over on their own 26-yard line. Jensen received the start behind center, supplanting sophomore signal-caller Tyler Vitt. Jensen completed two of his first three passes for 34 yards, then handed the ball off to junior running back Caleb Twyford for a three-yard gain.

Jensen dropped back to throw on the next play, turning to his right to target senior wide receiver Hutch White on a screen. The quarterback looked him off, though, then turned his eyes downfield to see Micah Hilts streaking wide open down the middle. Jensen tossed the ball over the defense and connected with the freshman tight end, who was brought down at the 1-yard line for a 36-yard reception. Twyford punched into the endzone on the next play for the first score of the game.

“We showed glimpses,” Jensen said. “You know, we get that momentum, we start making big plays, throwing downfield and that's what it is. And we get that, we just gotta make sure we can consistently execute and be efficient offensively and stay ahead of the chains.”

In the next quarter, Texas State picked up a first down at midfield. Redshirt freshman slot receiver Jah’Marae Sheread cut inside on a slant route and received a quick pass from Jensen. Sheread zig-zagged across the field and reached the end zone untouched for a 50-yard touchdown that gave the hosts a 14-3 lead.

“When I caught the ball, I was just thinking ‘touchdown,’” Sheread said. “I just kept running, full speed. I know it's gonna be hard for guys to try to catch me.”

The Bobcats wouldn’t score the remainder of the game. Later in the quarter, Jensen stepped up in the pocket and sent a pass toward junior wide receiver Jeremiah Haydel, but the ball was snatched away by Wyoming junior safety Braden Smith. The Cowboys used six plays to travel 46 yards on the ensuing drive, punctuated with a seven-yard touchdown run from redshirt freshman quarterback Sean Chambers. Jensen fumbled on the next possession

The visitors continued building momentum. The team scored a field goal on its first drive of the second half. Texas State marched forward 37 yards once it got the ball back, setting up a 1st and 10 from the Cowboys’ 38-yard line.

But Jensen’s next pass was intercepted by Wyoming senior cornerback Tyler Hall, who returned it 72 yards to the house and gave the visitors their first lead of the game, 20-14.

“This game gets magnified by your mistakes,” Spavital said. “You know, those three (turnovers) are going to be magnified for (Jensen). And that's kind of unfair to him. But you know, that's the way it is to play quarterback.”

The Cowboys went back to their strengths once they jumped ahead. Wyoming grinded 9:12 off the clock on an 18-play, 88-yard drive that resulted in a field goal to make it a two-score game. The Bobcats tried for a 53-yard field goal late in the fourth quarter, but senior kicker Joshua Rowland missed wide left. Texas State returned to the visitors’ red zone during its last drive of the game, but couldn’t score before time ran out, falling 23-14.

Jensen finished the night completing 33-of-54 passes, throwing for 394 yards, one touchdown and two inteceptions. White led the team with 10 catches for 96 yards. Sheread received four passes for 79 yards and a score. Twyford led the team on the ground with 10 carries for 60 yards and a touchdown. Senior linebackers Bryan London and Nik Daniels tied for the most tackles, with 11 each. Senior defensive back Anthony J. Taylor also intercepted Chambers on a Hail Mary throw during the last play of the first half.

The Bobcats outgained Wyoming by 151 total yards — more than Missouri — but still suffered the same fate as the Tigers. Spavital said he thinks the starting quarterback job is “Gresch’s to take away,” but planned to evaluate Jensen’s game tape before making a final decision. The team planned to give Vitt an opportunity at some point during the game, but Spavital elected not to after Jensen secured a lead.

“I thought Gresch was making some good throws and good plays,” Spavital said. “You look at where he ended up at and almost throwing for 400 yards, that means he is actually making completions and moving the ball around.”

Texas State will travel to Dallas next week to square off with SMU on Saturday at 6 p.m. Spavital said there’s work to be done, but can rest easy as long as the team continues to fight.

“There's a lot of familiarity with what we do on offense, a lot 11 personnel sets,” Spavital said. “But that's the beauty of this game. You gotta find ways to get your guys in the right position to have success. And I think we'll have it back up tomorrow and get this game over with and move forward and put a good game plan in to go compete versus SMU.”