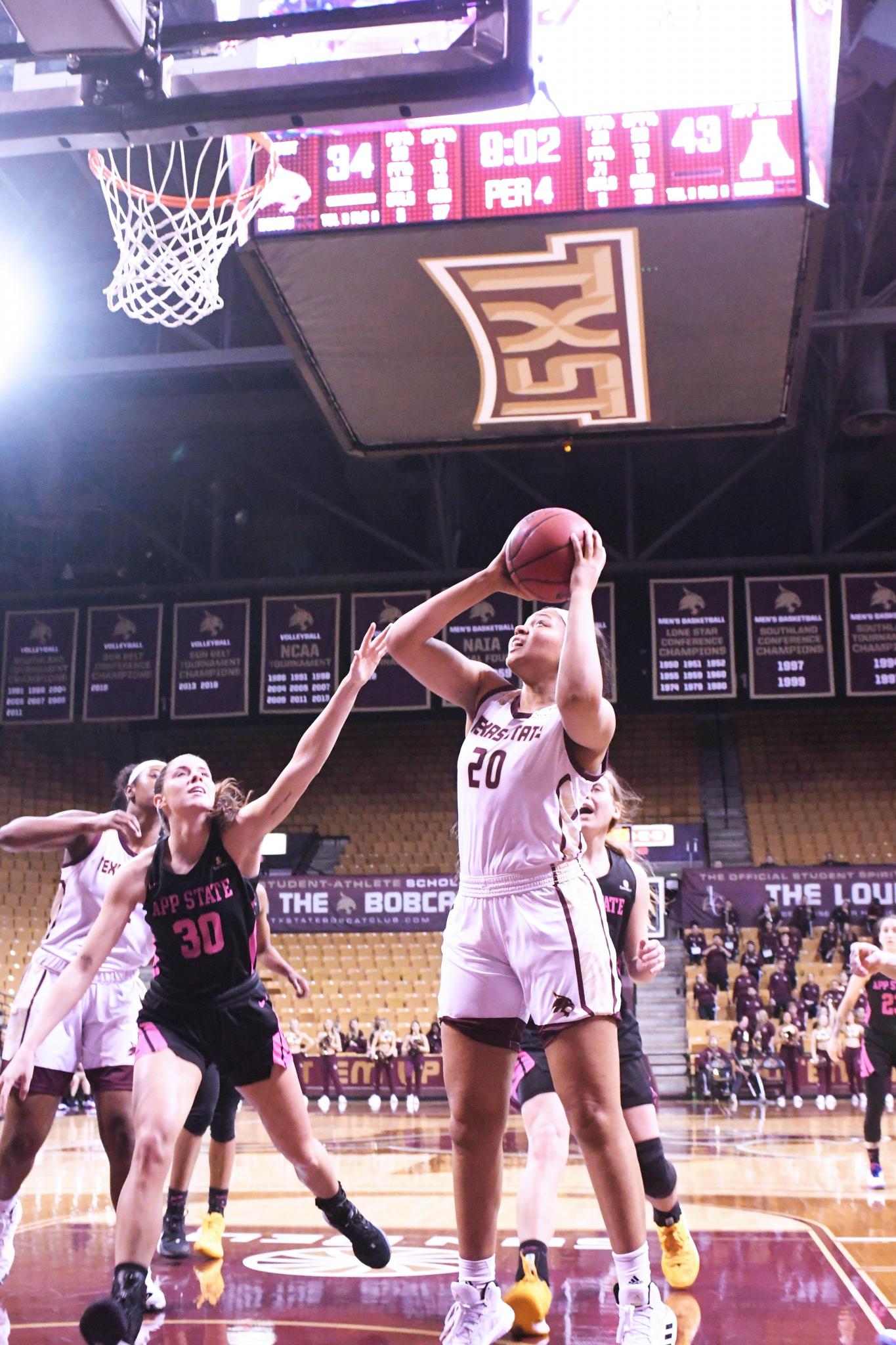 Bobcats fall to Mountaineers at home, 59-47

Texas State knew what to expect against Appalachian State’s 2-3 zone.

Head coach Zenarae Antoine noticed that since the teams faced off in Boone, North Carolina on Feb. 11, the Mountaineers (7-15, 4-7 Sun Belt) had been running a lot more zone against all their opponents.

The Bobcats (8-14, 1-10) prepared for it. They knew where their best shots were going to come from and got the ball to those spots regularly.

“We got good looks. Like, we talked about that at half, we got some great looks and we made sure that they knew that those were all good looks that we got,” Antoine said. “You know, the shots weren't falling. And when the shots aren't falling, your defense really has to come into play. And a couple slips really put them in a position where I felt like it gave them some momentum. And we need to match that and we had a difficult time doing that.”

The hosts fell behind 17-15 after the first quarter. But Texas State made an impressive defensive stand to jump in front.

The Bobcats held the visitors to just 20 percent from the floor in the second quarter. Freshman forward Chelsea Johnson went to work in the post, scoring six points in the period and lifting the team to a 25-23 advantage heading into halftime.

“They did a good job with our rotations, a really good job with our rotations,” Antoine said. “And then you know, we talked a lot about being one and done. And so at halftime, we celebrated that, just how well they did and talked about what it is we needed to do. And I felt like we started out with that energy. They didn't get easy shots, if you will. But then that energy subsided and we really needed to get it going when we weren't getting the scoring opportunities we wanted to. And that just didn't happen.”

Johnson rode the bench for most of the third quarter with three fouls as the maroon and gold offense began to sputter. App State outscored the hosts by 11 points in the third quarter to go up 41-32 entering the fourth.

Texas State had outscored its opponents in the final quarter in each of its past two games. The team came out swinging again as Johnson, Holle and Taylor all reached the rim to trim the lead down to seven points as the Mountaineers called timeout with 4:33 remaining.

“I saw a lot of energy and urgency (from Johnson), which was really nice because we were kind of lacking it at first,” senior guard Bailey Holle said. “But she came in and gave great energy. And I was really proud of her for that.”

But the Bobcats wouldn’t get any closer. App State junior forward Lainey Gosnell drained a 3-pointer out of the break and the hosts never got back within single digits, resulting in the 59-47 loss.

Johnson led the team with 14 points and eight rebounds. She was followed by Bailey Holle with 10 points.

“I just want us to keep fighting,” Bailey said. “Because we have had a tough run but we're working really hard. So we're just gonna keep fighting.”

The maroon and gold will travel to Arkansas this weekend to take on Little Rock (10-12, 8-3) on Thursday at 11:30 a.m. and Arkansas State (9-13, 6-5) on Saturday at 4 p.m. Antoine said she wants to make sure the rest of the season is one for the team to remember, especially for her seniors.

“A long time ago, I used to be a senior. I understand what that feels like. And every year, I always put myself in our seniors' place and understanding as that time nears, there's anxiety across the board, regardless of what the win-loss column looks like,” Antoine said. “And what I do appreciate is that they come to work every single day and they do their best to continue to build the program that they helped establish. And so it's important as we near these games that I don't change who I am as far as what my wants are for them as seniors and understanding that I put even more work to help them get us to a place where they can be proud of the product that they graduate from as they move forward in life.”