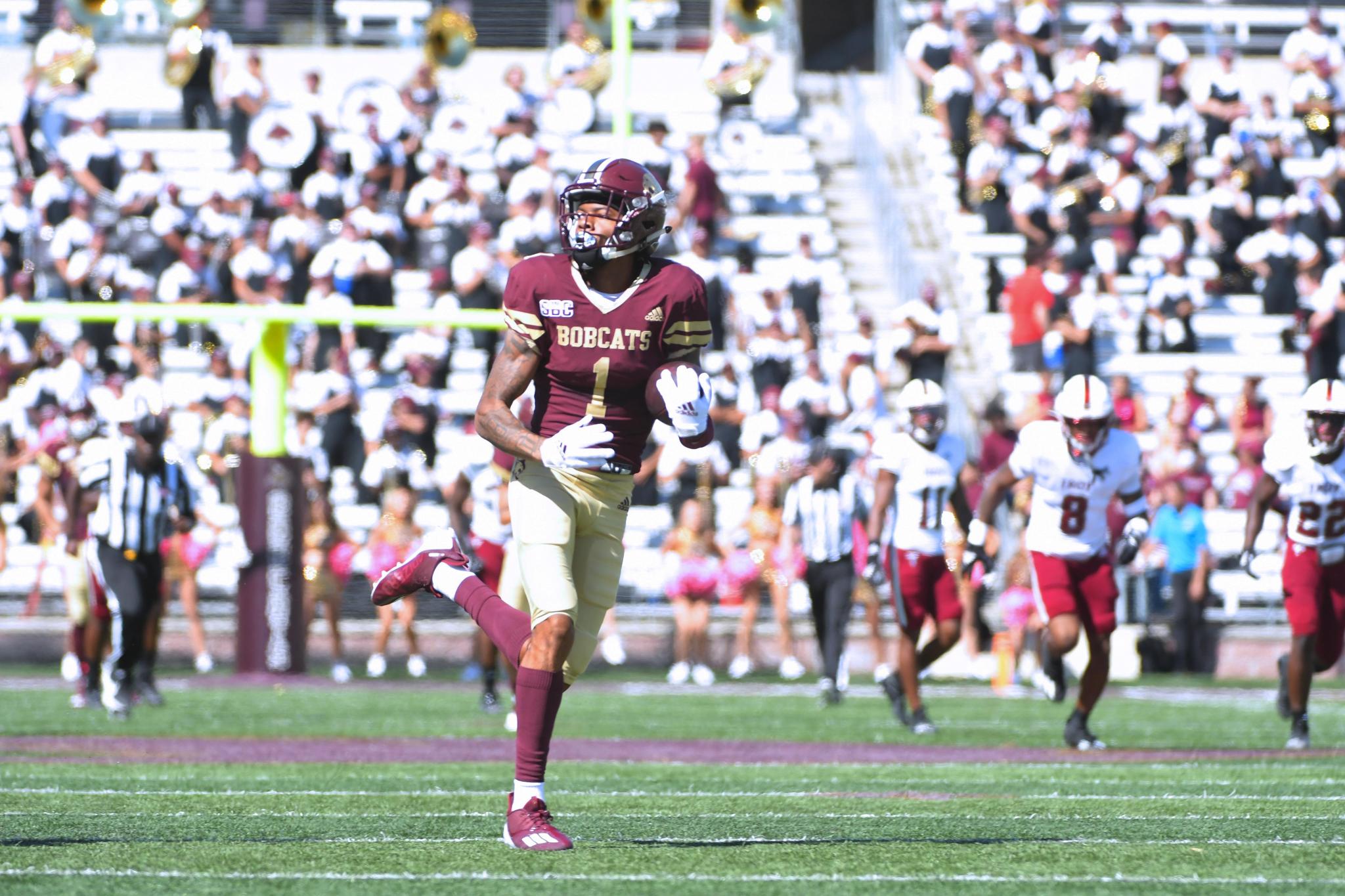 During the last 15 minutes of last Saturday’s home game against Troy, the Bobcat offense committed multiple turnovers and the maroon and gold defense failed to get off the field in critical moments. Both units did the same against Georgia State on Saturday, resulting in a 28-16 loss at Center Parc Credit Union Stadium in Atlanta.

“To sum up this game, it really comes down to execution,” head coach Jake Spavital said. “We had too many penalties and too many stupid mistakes. I thought (Georgia State) executed when it mattered. Like I’ve said every week, I don’t question our fight or question our effort. But for us to get over that hump and beat teams like Georgia State, who doesn’t make many mistakes, we have to clean it up. We have to clean up our execution. We had too many drops. We had too many busted assignments. We had too many busted routes. I did think they established the line of scrimmage so that we couldn’t run the football. They did a good job of controlling the clock, especially in the second half.”

The visitors had a solid start in the matchup. Redshirt sophomore kicker Seth Keller got Texas State (2-5, 1-2 Sun Belt) on the board with 42-yard field goals on each of the team’s first two drives of the game. The Bobcats’ defense stepped up, holding Georgia State’s offense to a three-and-out on its first drive. On the Panthers’ next possession, junior cornerback Kordell Rodgers punched the ball out, and senior linebacker Sione Tupou came up with the recovery on the visitors’ 38-yard line.

But the momentum began to shift in the hosts’ favor. Texas State was stopped on its next drive and sophomore punter Seamus O’Kelly pinned GSU (3-4, 2-1) in front of its own goal line. But the Panthers went on a 7-play, 99-yard drive that ended with an 18-yard touchdown run by redshirt senior running back Jamyest Williams. The team held the Bobcats to a three-and-out, then scored again, this time on a 35-yard pass to the end zone from redshirt junior quarterback Darren Grainger to redshirt senior wide receiver Terrance Dixon, to go up 14-6.

Brady McBride helped end the run. The redshirt sophomore quarterback threw four passes for 46 yards and added another 25 yards with his feet, including his first career rushing touchdown from eight yards out that cut the deficit to one point heading into halftime.

But Williams extended Georgia State’s lead early in the second quarter with a 28-yard scoring run. The maroon and gold only managed to answer with a 31-yard field goal from Keller, leaving the score at 21-16 at the end of the third.

Grainger widened the gap even further on the first play of the fourth quarter with a 27-yard touchdown throw to redshirt senior tight end Aubry Payne, making it 28-16. Still, with 14:54 left in the game and only trailing by two scores, a comeback wasn’t out of the question yet for Texas State

The Bobcats made it deep into GSU territory, going 46 yards on 11 plays, but faced a 3rd and 15 on the hosts’ 34-yard line. Brady McBride dropped back and fired a deep ball down the left sideline intended for junior wide receiver Marcell Barbee. But Barbee cut inside, expecting the ball to be thrown toward the middle of the field. Instead, the pass was intercepted by redshirt senior cornerback Jaylon Jones, who ran out of bounds at the Panthers’ 5.

With 9:53 remaining, the visitors’ comeback chances were slim but still hypothetically attainable. They vanquished after Georgia State burned 6:49 off the clock on a 15-play, 74-yard drive in which the Panthers picked up five first downs.

A missed field goal gave Texas State the ball back on its own 23 with less than three minutes to play and no timeouts. The maroon and gold zoomed down the field to GSU’s 11-yard line, but coughed the ball up on a strip-sack by junior linebacker Shamar McCollum. The Panthers kneeled to run down the clock, clinching the 28-16 victory.

“There are just so many things that transpired in this game when it came down to controlling the line of scrimmage, making too many mistakes, and executing when it mattered,” Spavital said. “This tape is going to be frustrating to watch because of all the mental errors and just simple execution that we did not convert.”

McBride finished the game completing 27-of-47 passes for 255 yards with one interception. He also ran the ball 17 times for 46 yards and a touchdown. Redshirt freshman running back Calvin Hill matched his rushing total with 46 yards on 10 carries. Sophomore wide receiver Ashtyn Hawkins caught six passes for a game-high 108 yards, followed by junior wideout Javen Banks with seven receptions for 79 yards.

The Bobcats will remain on the road next week, taking on one of its toughest opponents of the season in reigning co-Sun Belt champion Louisiana (6-1, 4-0). The two teams square off in Lafayette, La., on Oct. 30 at 11 a.m.

“We have five more games left, including a national TV game next week versus Louisiana,” Spavital said. “We have to respond and show up. The message in the locker room was that it was on us. We have to be able to execute in critical moments. We have to make sure we do the simple route things. That’s going to end up getting us to the next level. Overall, it was a frustrating loss. They are always going to be battles. These games are going to come down to the fourth quarter, but we have to strap it back up and find a way.”

This article has been updated to include quotes from Texas State head coach Jake Spavital.