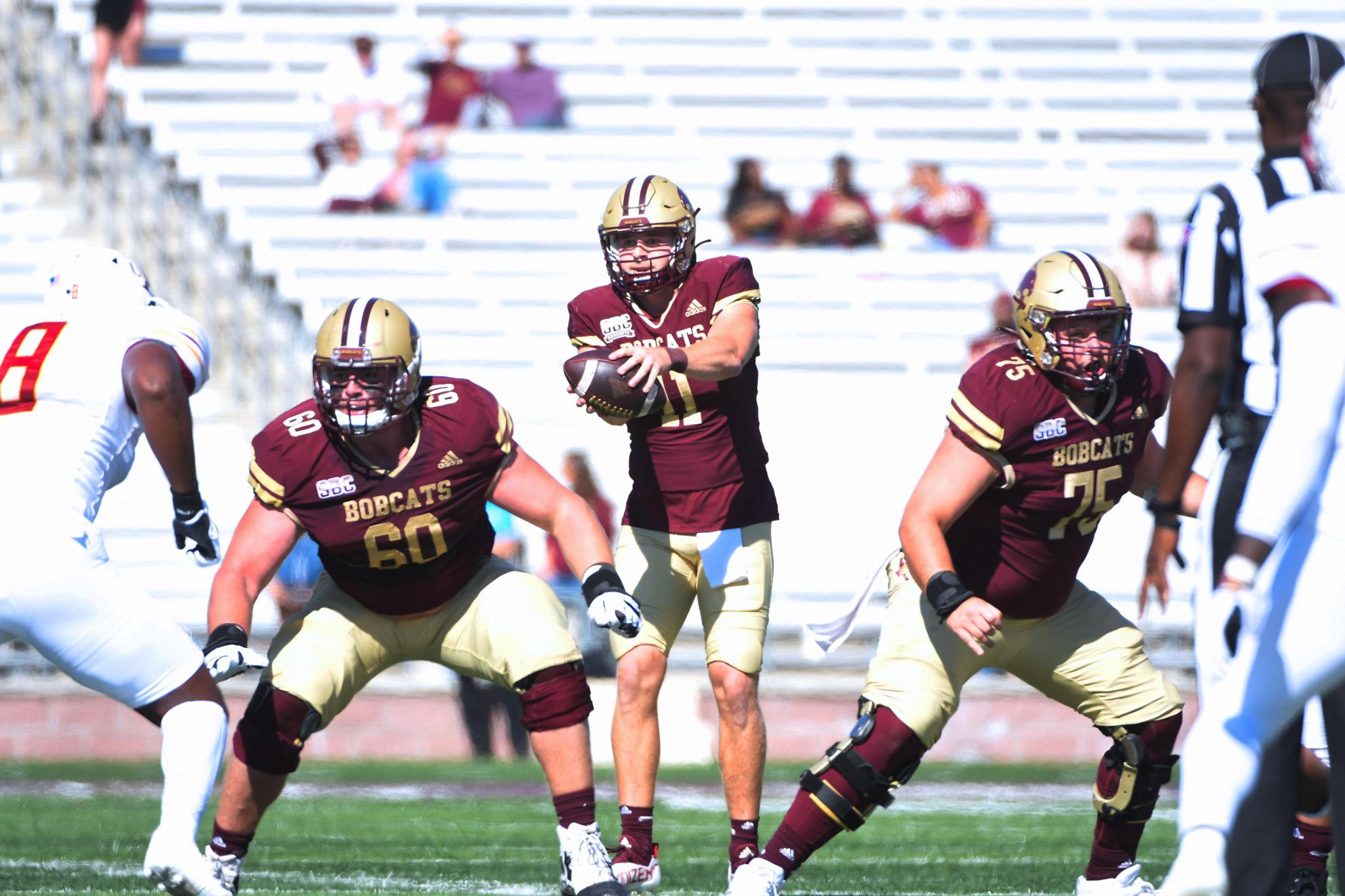 Bobcats leaning on O-line ahead of Georgia Southern game

Amid uncertainty in its backfield, Texas State has found solid footing in the trenches.

That hasn’t been the case all season. During the Bobcats’ game against Troy on Oct. 16, starting center Charles Fletcher suffered a “severe” left knee injury late in the second quarter that will likely keep him sidelined for the rest of the season. Sophomore Silas Robinson stepped in to finish out the game. In the next quarter, he sent a snap out of redshirt sophomore quarterback Brady McBride’s reach, resulting in a fumble recovery by the Trojans.

In the team’s next game at Georgia State on Oct. 23, the maroon and gold surrendered nine tackles for loss, including three sacks. McBride also suffered an ankle injury that has limited his availability in the weeks since.

But Texas State’s offensive line has walled up in the last two games. Louisiana and ULM were held to eight TFLs combined, both failing to bring down junior quarterback Tyler Vitt.

“You gotta give that offensive line a lot of credit, just based off of keeping a clean pocket and being able to move and run the ball efficiently and effectively,” head coach Jake Spavital said. “That offensive line is starting to kind of gel and get into a pretty good, just, continuity right now with each other. So, you know, pleased with their performance.”

The continuity has been a major source of the group’s success. In each of the past three games, the team has started redshirt freshman Dalton Cooper at left tackle, senior Liam Dobson at left guard, Robinson at center, sophomore Kyle Hergel at right guard and junior Russell Baker at right tackle.

It’s allowed the unit to find some consistency at a position that demands it.

“It's so important,” said Dobson, who began the year starting at right tackle before moving to the left side of the line for the first time in his career. “I mean, you look at every other position, you know, like the (running) back — there's one or two of them on the field at a time and they go hit the hole. Or a receiver, there could be up to four of them but they run an individual route, right? Like, there's five of us offensive linemen on the field at a time and we all have the same goal and that's to protect the quarterback and open holes in the run game.

The O-line will play a vital role again this week as Texas State hosts Georgia Southern, a team Spavital believes is one of the most talented in the Sun Belt. The Eagles have 16 tackles for loss and three sacks over the past two weeks and just held No. 21 Coastal Carolina below its yards per carry season average last Saturday.

Spavital also said at Tuesday’s practice that he plans to start Vitt behind center but could play McBride in certain situations, which could hinder the offense’s consistency. Hergel felt confident it wouldn’t, though.

“We work so hard day-in, day-out. I think (offensive line coach Jim) Turner does such a great job with us and we pride ourselves on protecting the quarterback at all times. You know, no matter who's back there, that's our guy, right? And we want to keep them clean all day and when we keep him clean, real good things happen with our team. And I think we're just going to continue not giving up too many pressures and sacks in games.”

Georgia Southern has adapted its traditional triple-option offense since relieving former head coach Chad Lunsford of his duties and promoting Kevin Whitley in the interim. The Eagles line up in many of the same formations and still want to get their quarterbacks — either Justin Tomlin or Cam Ransom — involved in the run game, but will also sprinkle in some spread concepts to keep defenses on their toes.

“Those two are a little bit green in the system, so they don't ask them to maybe run the triple option, so to speak,” defensive coordinator Zac Spavital said. “But they're definitely trying to get the ball to the perimeter and read like one guy in an option setting.”