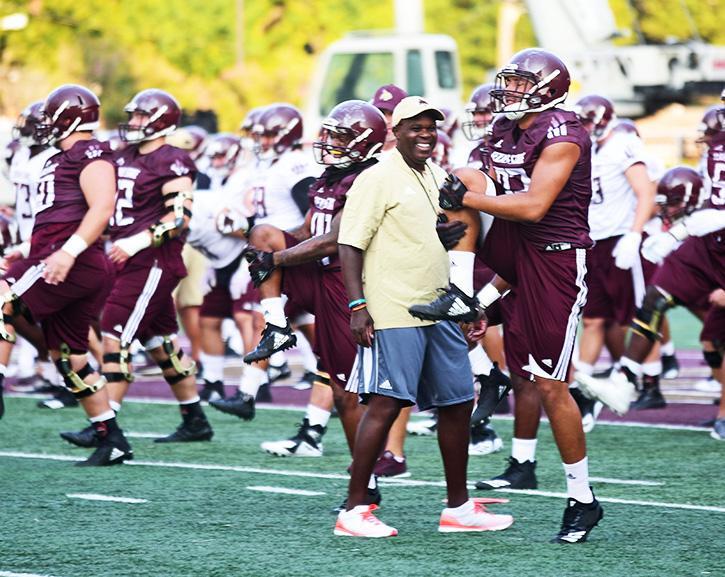 Texas State learned more about itself during its 35-7 loss to Rutgers.

Despite suffering a season-opening defeat, head coach Everett Withers felt like his team didn’t look out of place against the Scarlet Knights on Saturday.

“We didn’t look out of place, defensively,” Withers said. “We didn’t look out of place offensively. They’ve got more experience at Rutgers. (Rutgers) had more experience on their defensive side of the ball than obviously on offense. I thought we fought most of the route concepts well. We had three interceptions, one for a touchdown, and we should’ve had two more. We should’ve had five. So, I thought we did some things well.

“We’ve got a lot of stuff to clean up. A different type of offense, you know, you’re preparing for a true pro-style offense when all most of the time you see is spread throughout the year. You’re seeing three tight ends, and we probably don’t see three tight ends in three weeks. So, I thought they did some good things. We’ve got to clean up run fits better. I thought they competed and played hard. We didn’t talk well. OK. We didn’t fit run well. But we competed and played hard, and turned the ball over to our offense four times.”

One of the biggest things the Bobcats have to fix heading into this week’s game against Texas Southern is penalties. Texas State commited 15 penalties for 119 yards against Rutgers. Withers acknowledged that some of the penalties were due to first game jitters.

“First ball games, you know, a lot of times if you watch across the country there’s a lot of penalties,” Withers said. “I think we were in the top five over the last two years in least amount of penalties in the country, and to have that in the first ballgame, hopefully we got them out of our system. We had eight on offense. Two of our best players had six of them on offense — Aaron Brewer and Jacob Rowland — had six, holding and false start penalties. So, you can’t have those. We had four on special teams, which you can’t have, especially when you go on the road. I will say this, I questioned about three of them, three penalties called.

“...So, we’ve got to back and work on it. We have to go back and work on the attention to detail. There’s some administrative things that could have helped us with a couple of those penalties. We didn’t do those things well.”

Defensively, Texas State ended its interception drought. The Bobcats’ three interceptions against Rutgers were the first interceptions they recorded since Oct. 22, 2016 against Louisiana. Freshman defensive back Jarron Morris intercepted the first pass, while sophomore cornerback Kordell Rodgers tallied the other two, including a pick six. Rodgers said the defense is feeling good after ending the drought.

“That definitely boosted the defense’s confidence,” Rodgers said. “You know every day we just try to go out there and get better in practice and stuff, and compete. You know, we work on takeaways in practice. So, we were just grateful to get those takeaways in a game like that.”

Heading into their second game of the season, Withers said their week two matchup against Texas Southern sets up well for the Bobcats. But added that Texas State will focus on improving itself as opposed to worrying about its opponent.

“Here’s what you have to understand,” Withers said. “We don’t worry too much about opponents anyway. We kind of take care of us and we kind of know what you are when we play you. But it’s really about us. The preparation is really about us getting better each week and not about the opponent. So, we’re going to know that they run this style of defense, this style of offense. But we’re going to try and take care of us, and try to get better each week.”

Texas State takes on Texas Southern on Saturday at 6 p.m. inside Bobcat Stadium. Rodgers and the Bobcats want to see the stadium full for their home opener.

“We’d love to have this stadium filled for the first home game,” Rodgers said. “Like I said, try to get a win for you guys and us to boost our confidence again. Like I said, we just go out and practice and get better and prepare for a win. That’s all we do each and every day.”