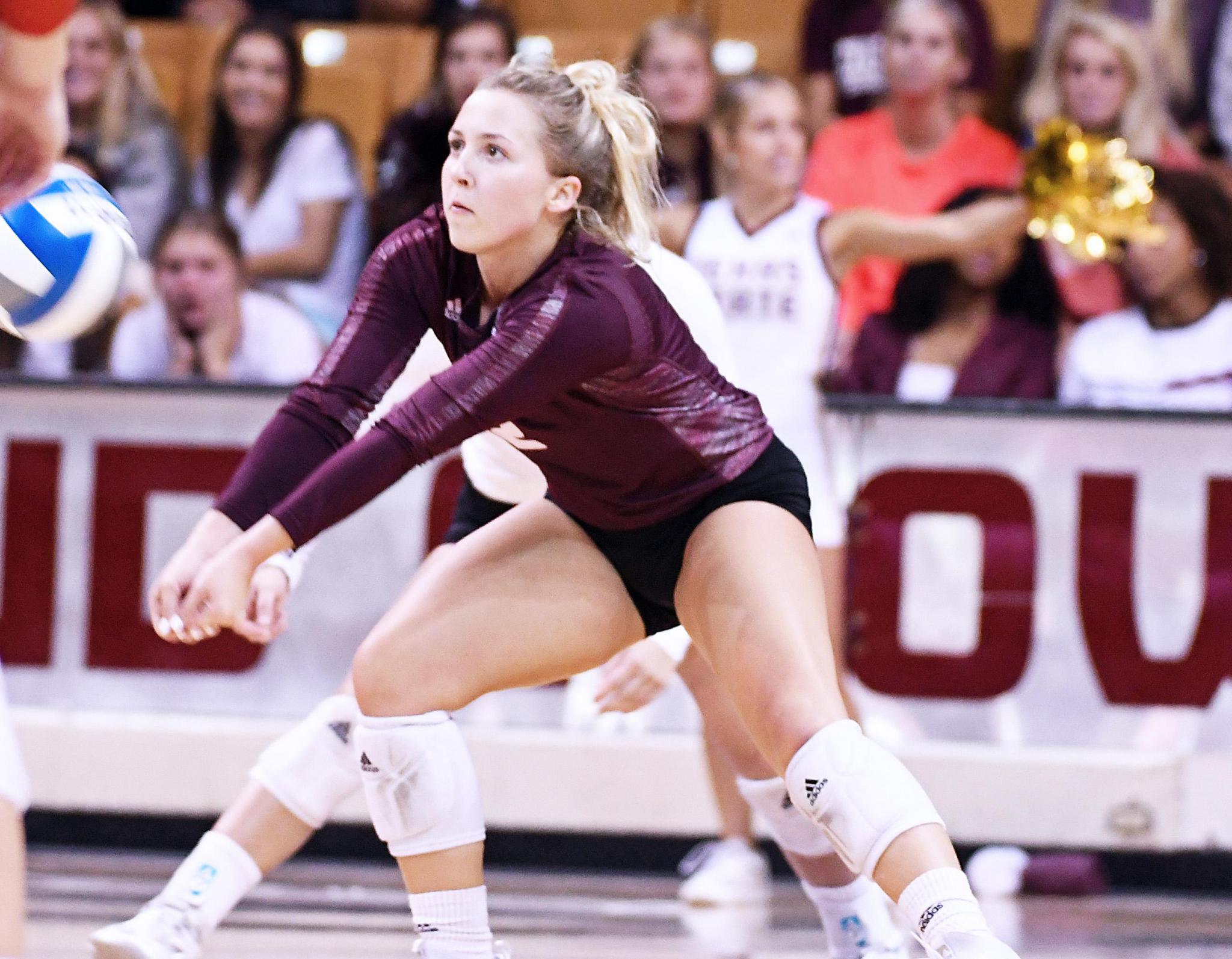 Bobcats make it eight straight with sweep over Arkansas State

The head coach has been at Texas State for 39 seasons, including six in the Sun Belt Conference. She knows everything about everybody. It’s one of the reasons the Bobcats are currently on an eight-match win streak, half of them coming against conference opponents.

But what was the game plan heading into Texas State’s 3-0 sweep at home over Arkansas State on Saturday?

“Stop No. 2,” junior libero Micah Dinwiddie said. “That was it.”

No. 2 for the Red Wolves is Carlissa May, a senior outside hitter who has appeared in every game that Arkansas State played since she arrived as a freshman in 2015. She became a regular starter during her sophomore season and has led the team in kills every year since. At 5-foot-10, May is a powerful striker, averaging 3.92 kills per set for her career and 4.25 this season.

Chisum has seen May’s growth on the court and made sure to point it out to her team. The scheme worked.

Early in the first frame, Arkansas State used a 4-0 run to take a 6-3 advantage. The Red Wolves’ lead eventually peaked at 14-7 before the Bobcats began their comeback. Texas State tied the game at 19-19 on a four-point run of its own, then used a 5-0 run late in the set to get ahead, 24-21. Freshman outside hitter Janell Fitzgerald scored the game-winning point on an assist from freshman setter Emily DeWalt.

“I just look to my teammates and my coaches through the entire process and just play the game that I love to play,” Fitzgerald said.

The Bobcats rode the momentum into the second set. After gaining possession back from Arkansas State, DeWalt went on a 4-0 serving run to put Texas State ahead, 5-1. The Red Wolves did manage to tie things back up at 12-12, but the Bobcats were able to pull away again. Dinwiddie served an ace to the back right corner to seal the frame, 25-21.

“I think we’re all very competitive people,” Dinwiddie said. “So, as long as we keep each other saying, ‘Stay competitive, stay calm, do what we know how to do,’ the game’s going to go well.”

Arkansas State tightened things back up in the third set. May scored five points alone — an ace and four kills, her last tying the game at 24-24. But sophomore middle blocker Tyeranee Scott and junior outside hitter Cheyenne Huskey picked up kills on the next two plays to complete the sweep, winning the frame 26-24 and the match 3-0.

May racked up 14 kills, but also had four errors and was held to a .233 percent attacking rate. She had been spiking at a .250 percent clip against conference opponents before Saturday’s matchup.

Fitzgerald finished the night with 11 kills. DeWalt and Huskey each earned a double-double. Dinwiddie led the team with 11 digs. The victory marked Texas State’s eighth straight.

“I think everybody’s just doing their job on the court,” Dinwiddie said. “Everything’s flowing good for us, so I think as long as we stick to our game plan and what we’re doing well, it’ll just keep going for us … We can’t say enough about the game plans that (the coaches) give us. And as long as we follow the game plans — we haven’t lost yet.”