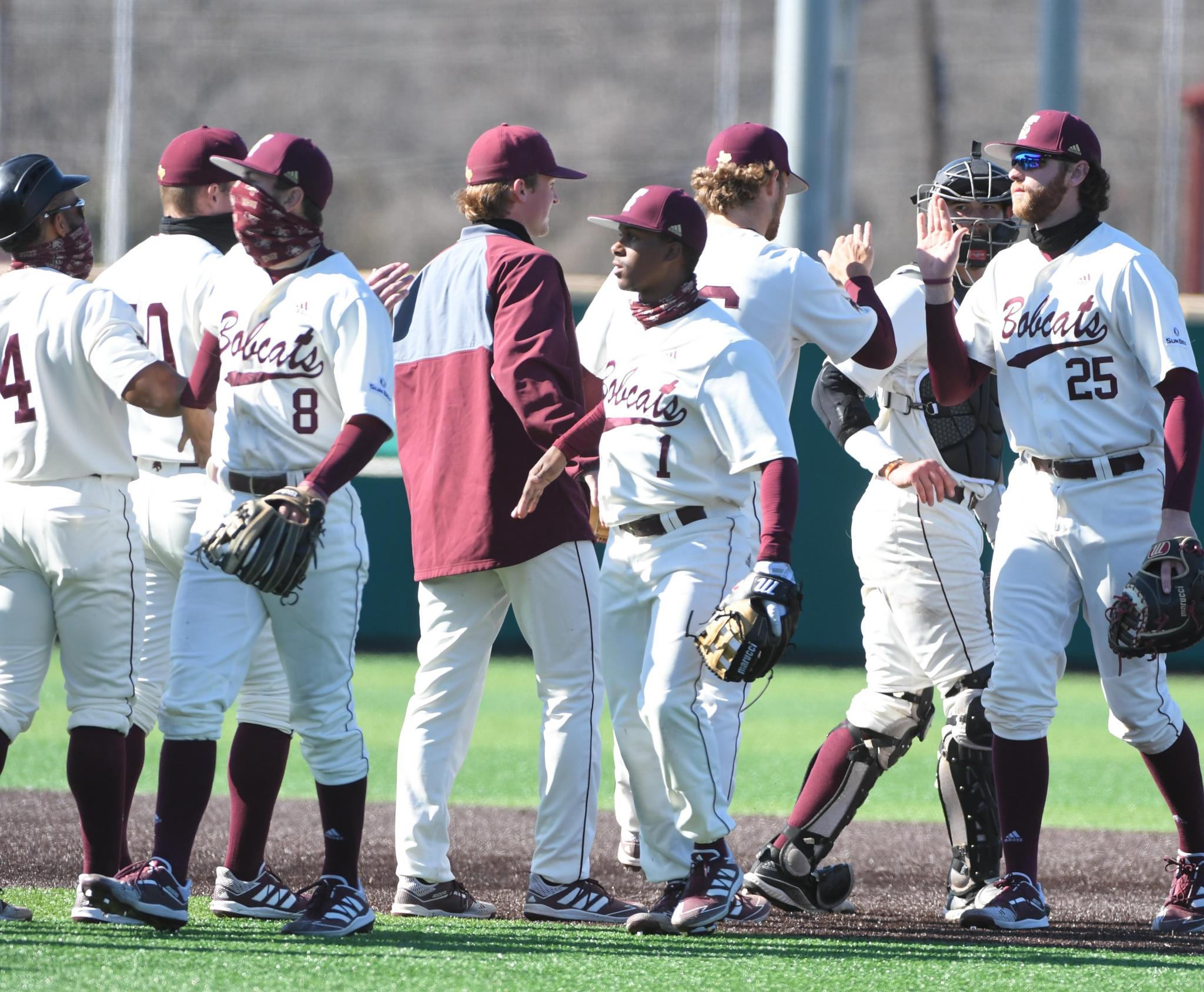 Bobcats open season with a split against BYU

It’s as if the Texas State baseball team would have to wait for what felt like an eternity before they touched the field again.

On March 11, the Bobcats stepped on the dirt and grass field for the last time before the global pandemic shut them down. Last week, Texas saw weather that broke historical records freezing over one of the hottest states in America. Snow covered the field and the bleachers, streets and highways, causing cancellations in several NCAA sports across the state. Texas State couldn’t resume practice until Friday in order to prepare for the end of its nearly year-long hiatus.

The maroon and gold had a good outing in its first game back Saturday defeating BYU, 5-4 inside Bobcat Ballpark. A couple hours later, the rust slowly caught up to the Bobcats, costing them a doubleheader sweep after losing 9-4 to the Cougars in game two.

“What a great day,” head coach Steven Trout said. “You know, even though you go home with a loss and a bitter taste in your mouth, it's just great to see our guys back out there competing and playing. You get your first win and your first loss in the same day and that's baseball. But you know, (I’m) just happy to see our guys out there playing and getting after it.”

In the first game, senior right-hander Zachary Leigh put on a pitching clinic, throwing 10 strikeouts in four innings of work and allowing 2 runs on three hits. For BYU, the rust displayed by their abundance of errors on the field. Immediately following a hit from junior shortstop Dalton Shuffield, an error by the Cougars allowed Shuffield to get home with ease. The bats continued to work for Texas State in the second, putting up two more runs the next inning. By this time, Leigh had already been up to nine strikeouts, but BYU’s power hitter junior outfielder Cole Gambill kept his team in it with a two-run homer that cut Texas State's lead to one. The Cougars found a way to tie the game at the top of the sixth, Shuffield found a way to cross the home plate again on a Sac-RBI by Wuthrich. That was the 5-4 lead the Bobcats held from the bottom of the seventh until the end of the game.

“Playing someone for the first time of the season, you usually have great scouting reports,” Trout said. “And a lot of these teams got new players like we do and a bunch of stuff. So you try to learn which guys are going to run, guys are going to bunt, some of the weaknesses, but it's just a short amount of time.”

Some of the first day jitters showed their face when Texas State caught the error bug and Trout felt as if his pitching staff walked too many batters in the second game of the doubleheader. The walks allowed Gambill the opportunity to blast his second home run of the day and aid the Cougars in scoring as many runs in the second inning of game two than all of the first. However, Texas State made up for it at the plate, scoring three runs of its own to respond — which Trout said was the key moment in the loss, showing his team’s will to not give up. That was as close as Texas State got before a couple of fielders errors extended BYU’s lead by five, sending the Bobcats home with a split in its opening day.

“Doubleheaders are tough, most of them are split all the time and we knew that going into the second game that was our challenge, was trying to find a way to not let that happen and win both of them.” Trout said. “It didn't work out but I know from our standpoint, I was really proud of our guys. In the second, we got down 4-0 and that's an easy time just to fold over and go, ‘Let's just split this.’ And our guys battled back for three, so I was extremely proud of that.”

The Bobcats have a short turnaround when they take the field Monday against BYU at 4 p.m.

“There’s very few times when you get to play a team twice and then actually get to practice before you play them two more times,” Trout said. So we can go to work on some of the things that some of our hitters and some of the guys maybe we saw who we will see again. Really, it's gonna be a lot more about ourselves, just getting around the baseball more, getting our swings back on time, just some of the small things that we made notes throughout the day and go to work on them. Then come back in and have a super long week of six games, and we go get after it. So what a great time to have to try to figure out your team.”