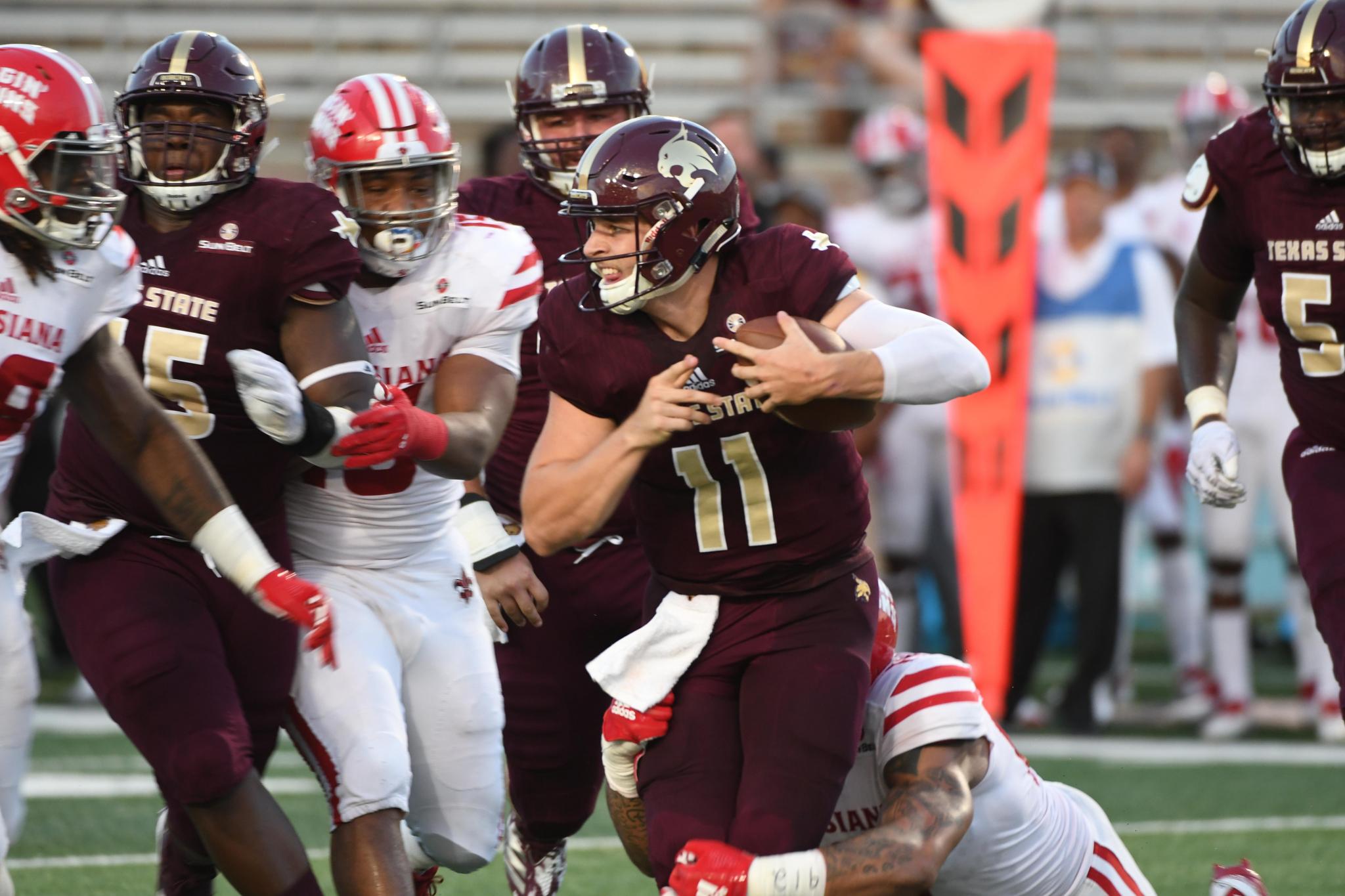 Bobcats out of answers in loss to Louisiana

Texas State head coach Everett Withers had no answer to why his team lost to Louisiana, except that he needs to be a “better” head coach.

The third-year head coach suffered his 20th double-digit loss at Texas State in 42-27 fashion against the Ragin’ Cajuns on Saturday inside Bobcat Stadium.

Cajun sophomore quarterback Levi Lewis pushed the lead to 21-0 with a 3-yard pass to junior wide receiver Ja’Marcus Bradley. Mitchell found the endzone again, this time on a nine-yard rumble to the endzone to give the Louisiana the 28-0 advantage heading into halftime.

Texas State’s defense had no answer for the Cajuns' offense in the opening half. Louisiana racked up 340 total yards. Meanwhile, the Bobcat offense never got into a rhythm and only gained 110 yards.

Withers blamed the slow start on the offensive coaches not preparing the team enough. Graduate senior tight end Keenen Brown wasn’t sure what caused the bad performance in the first half.

“To be honest, I couldn’t tell you,” Brown said. “I mean, we had a great preparation at practice. I don’t know what to tell you. I mean, just had a slow start.”

The Bobcats started faster in the second half. Freshman quarterback Tyler Vitt, who made his first career start against Louisiana, rifled a pass to sophomore wide receiver Jeremiah Haydel for a 36-yard touchdown on the Bobcats second possession of the third quarter.

Vitt was on the receiving end on the next offensive possession. Junior wide receiver Hutch White lofted a ball to a wide-open Vitt on a throwback pass for a 9-yard score to cut the Ragin’ Cajun advantage down to 28-13.

“It’s never easy getting a loss,” White said. “But we came out at halftime, coaches really talked to us and we decided right there, you know, we’ve got to have some pride about ourselves. We got to come out and play and not beat ourselves.”

But the Cajuns answered on the following drive with a six-yard rush from Mitchell to extend their lead out to 35-13.

Texas State didn’t go away though. Vitt hooked up with Brown on a 26-yard touchdown strike to cut the Louisiana lead back down to 35-20.

But, again, the Cajuns responded with a touchdown on a nine-yard pass from senior quarterback Andre Nunez to senior wide receiver Ryheem Malone.

The Bobcats cut the Louisiana advantage down to 42-27 with a 15-yard touchdown reception by Brown. Texas State’s defense came up with a three-and-out to give the offense the ball.

The Bobcats drove down the field on 13 plays. But on 4th and Goal, Vitt was stopped on a two-yard run to end Texas State’s hope of a comeback.

“We came slow and the second half showed what really we can do and what we should’ve been doing in the first half,” White said. “So, we should have been doing that the whole game.”

Texas State has a short week to prepare for Georgia Southern on Thursday at 6:30 p.m. at Bobcat Stadium.

How does Withers plan to help the Bobcats perform better? It’s simple.

“Be a better head coach,” Withers said. “Whatever from A-to-Z. Look and evaluate everything from A-to-Z.”