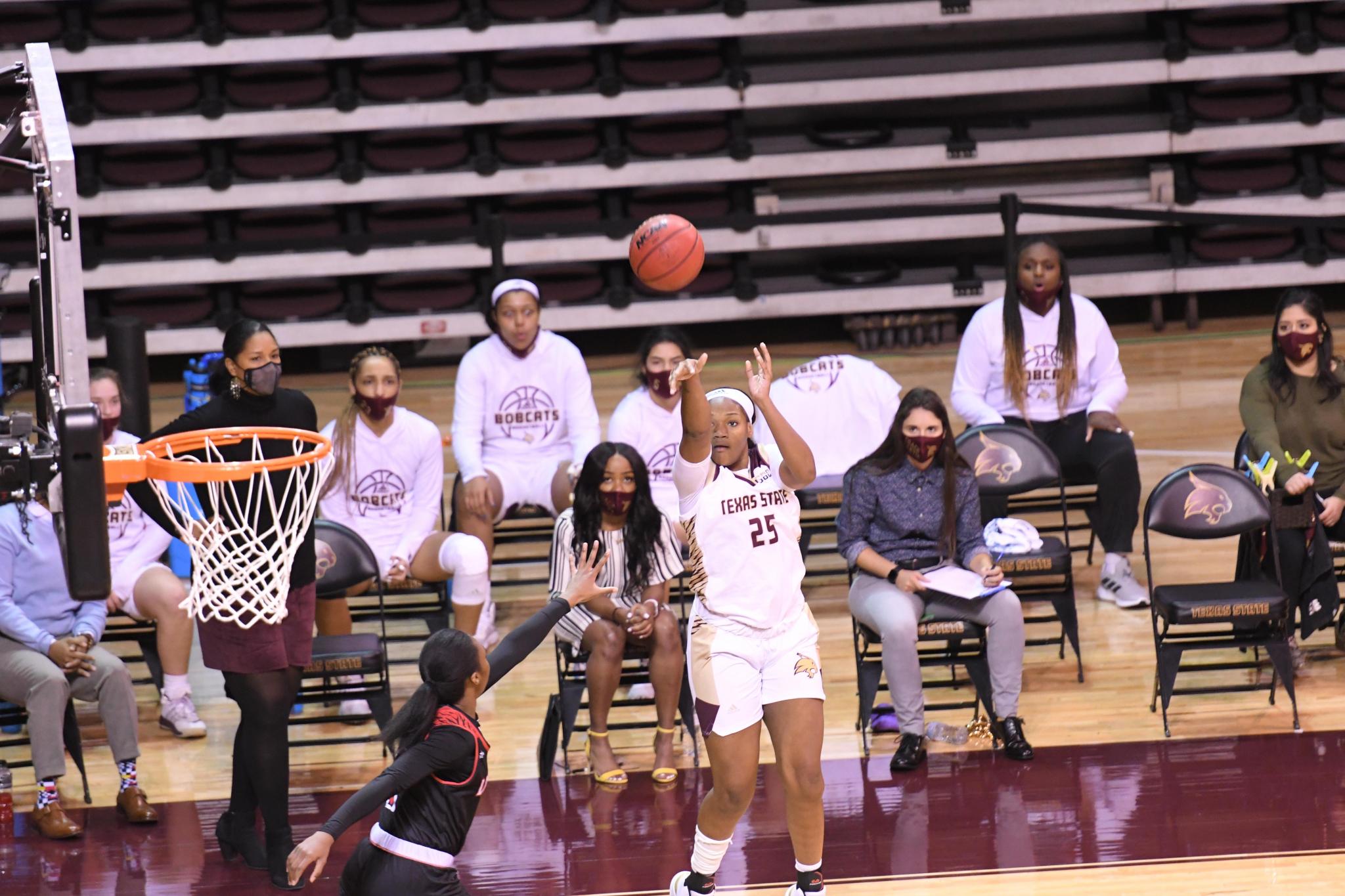 Friday’s momentum didn’t carry over to Saturday early on for Texas State.

A day removed from going on a 22-1 run in the second half of Friday’s 72-54 win over Louisiana-Monroe, the Bobcats began Saturday’s game ice cold. The team shot just 2-14 from the field and committed four turnovers during the first quarter. ULM redshirt junior guard Kierra Brimzy racked up seven points on the other end and the Warhawks finished the frame holding a 13-7 lead.

“They came out really aggressive. And I think that we also came out aggressive and we just didn't really get the chance to hit a lot of shots,” junior guard Kennedy Taylor said. “But we knew that it was going to be a long game, a long night, so we just made sure we put our foot down on defense and, you know, do what we had to do to make it easy on offense.”

Texas State came back in the second quarter and the hosts kept their foot on the gas the rest of the way to earn a 64-50 win inside Strahan Arena and a series sweep of ULM.

“The adjustments that the team made, I felt, were just really good,” head coach Zenarae Antoine said. “Even within the game and the talk you heard was positive, the emotions were positive. There was adversity at different points that I can point to, but I felt that they recovered really well as a team.”

After scoring just two points in the paint and making one trip to the free throw line in the opening quarter, the Bobcats (6-5, 3-3 Sun Belt) made a more concerted effort to get to the rim and draw fouls in the second. They trailed 18-12 midway through the period, but a pair of free throws by junior forward Da’Nasia Hood and another foul shot from redshirt sophomore forward Lauryn Thompson cut the lead in half.

Taylor laid the ball in on a fast break to cut the deficit down to one point. Taylor found Hood wide open in transition at the top of the key and the forward drained a 3-pointer to give the hosts their first lead of the game, 20-18.

2Q 3:35: @smdrsports #ULM leaves Da'Nasia Hood open in transition, she makes them pay with a go-ahead trey from the top of the key. Warhawks call another timeout as #TXST now leads 20-18 pic.twitter.com/tGK2p9qK0q

“In the third quarter, I would say we just amped it up more,” Thompson said. “We knew that we needed to pull away the game so that we can solidify this win because we really wanted to sweep this weekend. So in the third quarter, we just focused on getting the best score that we could and I think my teammates put me in a lot of good positions.”

#TXST goes right back to Lauryn Thompson to start the fourth quarter. She puts the double team in the washing machine @smdrsports pic.twitter.com/q3hTvitlcj

Hood drained a jumper to begin the fourth period and Texas State led by double-digits the rest of the way to take the 64-50 victory.

Brimzy finished with a game-high 24 points, but all other ULM players were held to single digits. The Warhawks finished with a higher field goal percentage, forced more turnovers and grabbed more rebounds than the Bobcats, but shot just six free throws. Texas State made 18 of its 22 shots at the stripe.

“I think we found a way to finish it at the free throw line, which is ultimately going to be really important,” Antoine said. “I thought Kierra Brimzy did a phenomenal job, she was hitting a lot of tough shots, but no one else really got going in a rhythm for them. So those defensive stops, you know, were going to be really important for us and we did a good job of that. And I really got on to my team yesterday about the fouling. You know, we put them to the line 24 times yesterday. And so I think that's an adjustment that you can point to as well.”

Thompson secured a double-double with 23 points and 11 rebounds. Hood added another 19 points and nine boards. Taylor scored seven points while handing out 12 assists.