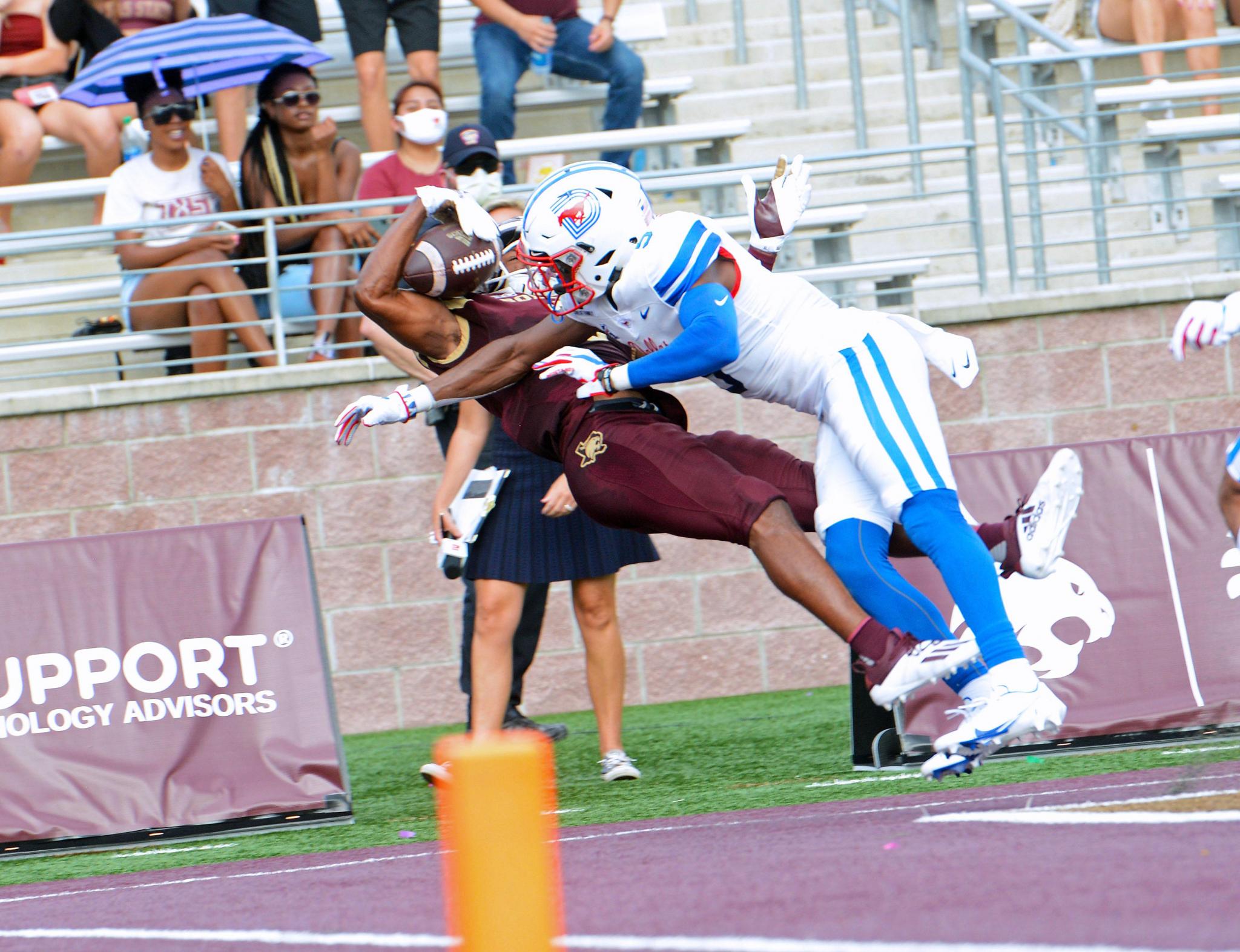 Texas State's 31-24 loss to SMU in the 2020 season opener Saturday impressed Bobcats head coach Jake Spavital and left the team with a lot of optimism heading into this week.

But Texas State knows it needs to it'll need to fix a lot of mistakes to channel its optimism into more wins.

“After going back and watching the tape, I'm really proud of the effort of these kids. But we left a lot of football out there,” Spavital said. “You know, again, there's a lot of emotion to this game and you throw these kids out there in that environment and they do some uncharacteristic things that they typically don't do. And that's normal but we've got to minimize that as much as possible. I think that they've done a really good job of handling this all the way up to that point. And I think these kids are ready to get out there and start playing.”

Spavital said multiple players who had been in quarantine for the past two weeks due to contact tracing returned to practice this week. Many players who were hurt during the SMU game, such as lineback Sione Tupou, defensive lineman Jaquel Pierce and redshirt sophomore tight end Blake Aragon, were getting back on the field as well.

The added depth will come in handy for the Bobcats against this week’s opponent. The team truthfully doesn’t know much about what it’ll be up against in this year’s UTSA squad.

After a 4-8 season in 2019, including a 3-5 record aginst Conference USA opponents, the Roadrunners brought in first-year head coach Jeff Traylor in the offseason to rejuvenate the program. Traylor added former Arkansas interim head coach Barry Lunney Jr. as his offensive coordinator and former Ole Miss outside linebackers coach Tyrone Nix — who Spavital called a “well-respected defensive coordinator” — to his staff.

UTSA did not play last week, meaning Texas State does not have any film on this year’s version of the Roadrunners, their tendencies or how they will operate with the new personnel. The team has not named a starting quarterback yet, either, listing juniors Josh Adkins, Frank Harris, Lowell Narcisse and sophomore Jordan Weeks on the depth chart in alphabetical order.

“It's kind of gonna be the nature of the beast around here, just with — you don't know what personnel you're gonna see week-to-week now,” Bobcats defensive coordinator Zac Spavital said. “It's a lot more difficult but you focus on yourself, having a defense. And then you talk to the players more about, 'Alright, this is what they're doing, here's our adjustment, here's our answer.' So instead of trying to capitalize on tendencies and things like that, we focus more on, 'OK, we're gonna practice this if they're coming out to do this.' And that's kinda what you have to do when you don't have much tape.”

The Texas State defense was a strong point for the maroon and gold in last week’s game against the Mustangs. The Bobcats gave up just 31 points to a team that ranked seventh in the FBS by scoring 41.8 points per game. The unit came up with three consecutive turnovers during SMU’s first three drives of the fourth quarter to keep the lead at seven points.

Still, Zac believes there were mistakes made both fundamentally and execution-wise that could come back to haunt the defense if they aren’t cleaned up this week.

“Regardless of the performance, you can never be satisfied,” redshirt senior defensive end Gavin Graham said. “So really and truly, I would never come out here, like, 'Oh, I think we play just phenomenal,' because there's always gonna be areas to improve, whether it's tiny fundamental things, gap schemes or anything like that. So really and truly, you know, you could say we play good and all that stuff and people would say 'Oh, it looks like a different team, different vibe.' But to me, at the end of day, we didn't win. And that's what we're chasing. We're trying to flip this program, change the culture of everything and win games.”

This will be Graham’s third time facing UTSA and the program's fourth overall. The Roadrunners have won all three previous contests, including the most recent meeting — a 25-21 nail-biter inside the Alamodome on Sept. 22, 2018.

With nearly half the roster spending its first year in San Marcos, Jake Spavital has spent time during the week educating his players on the rivalry between the two schools and the importance of this week’s game. Graham said the players have taken in what’s at stake.

“It's so close in proximity that I think that's what makes the rivalry kind of, like, elevated. Because you know, they're like, 30, 45 minutes down the road,” Graham said. “But I think our coaches also do a good job of stressing that, while it is a rivalry, you need to approach every single game as if it's a championship game. Because if you go into a game and you're like 'Oh, they're not a rival,' or 'Oh, they're this, they're that,' then you're not going to play to your best ability. So throughout the week, Monday, even on our off day, coming in and getting in film, Tuesday, Wednesday, our hard work days, you gotta prepare as if you're playing the best team in the country every single week.”

Texas State (0-1) is set to host UTSA (0-0) inside Bobcat Stadium on Saturday at 2:30 p.m. in the fourth I-35 Showdown. The game will be broadcasted on ESPN2, the fifth time the program will make an appearance on the network after making its debut on ESPN last week against SMU.

The Texas State head coach is excited to get his first crack at the rivalry game.

“Just in my short time here, I've had more conversations about the I-35 Showdown than the SMU game. This game means a lot to Texas State University and I've explained that to our kids,” Jake Spavital said. “I think it's gonna be fun to be a part of.”