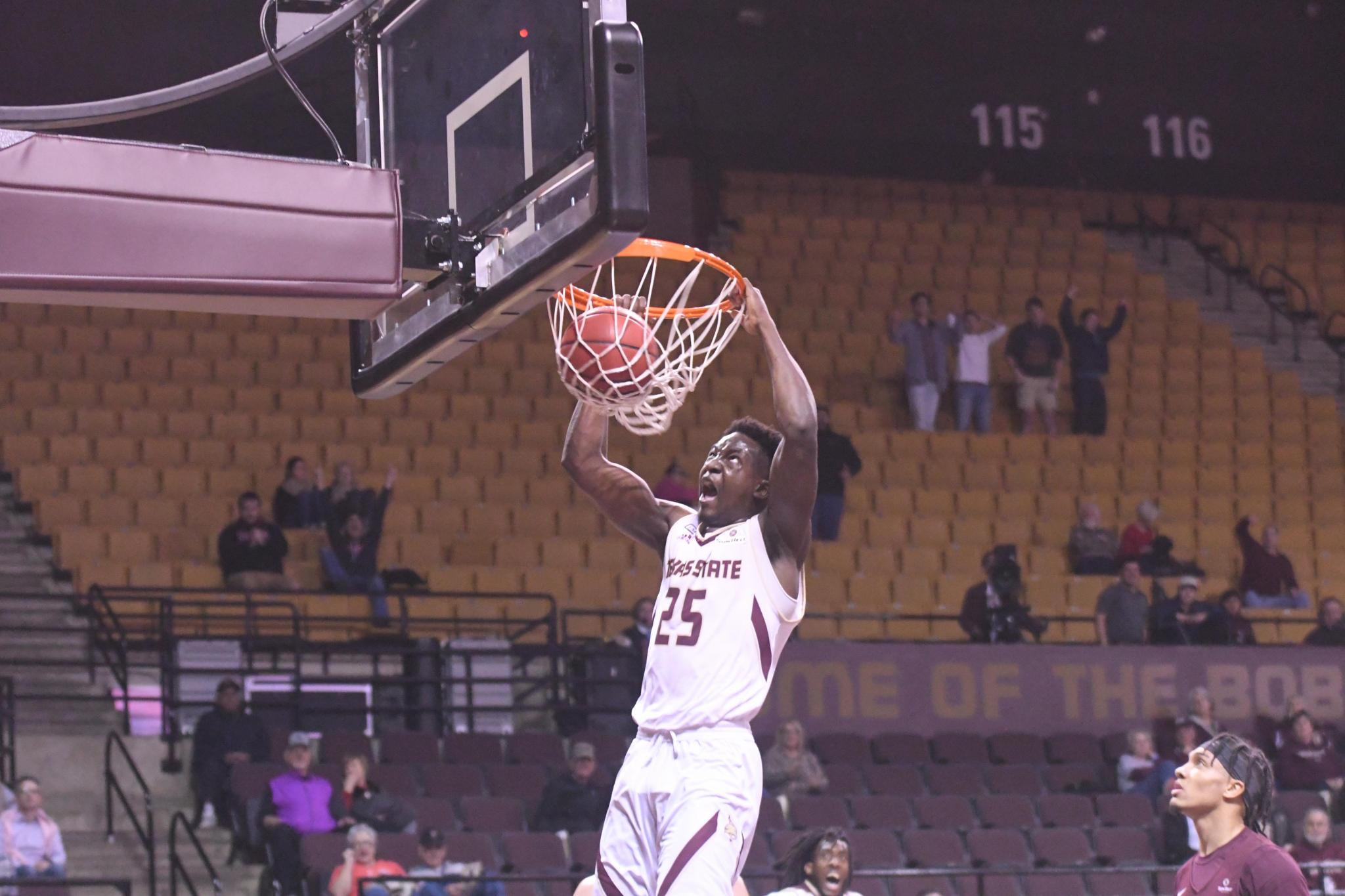 Bobcats rattle the rim in 74-66 win over Little Rock

As the Texas State head coach sees it, very few players used to be able to dunk. Now it’s become a common occurrence — and less impressive to Kaspar.

“The dunk is overrated unless it happens in a situation like what (redshirt sophomore center) Alonzo (Sule) did,” Kaspar said. “You know, he came from out of nowhere and, I mean, that was a fantastic basketball play.”

Senior center Eric Terry ran into foul trouble early on, picking up two fouls on the same possession 2:50 into the first half. Sule replaced him in the lineup and immediately went to work in the paint, drawing a foul and sinking two free throws on the next play to put the hosts up 7-0.

Texas State extended the lead to 25-7 midway through the half. With 9:08 left on the clock, senior guard Nijal Pearson pulled up for a 3-pointer from the left wing, but the ball careened off the right side of the rim. Sule grabbed the offensive rebound and pitched it to sophomore guard Mason Harrell, who launched another deep shot from the right wing.

The ball missed the mark again but Sule was left unchecked.

The Trojans’ two post defenders hustled to box out Pearson and junior forward Isiah Small, each on opposite sides of the lane. With no one in his path, Sule thundered into the paint, elevated for the board, snatched the ball with his right hand and flushed it back into the goal for a monster putback.

I thought Alonzo Sule was going to rip the rim off 🥴 @smdrsports pic.twitter.com/fRk5UkNhyr

“I love the dunk by 'Zo because it was an offensive rebound,” Kaspar said. “Throwing someone when they're wide open and all they gotta go do is dunk it, you know, I can see that 100 times a day … But it was great to see his dunk, Sule's dunk. That was special.”

“I feel like that that was a good energy boost for us,” Sule said. “And we capitalized on it.”

The Bobcats rode the wave of momentum from Sule’s slam to a 41-22 lead at halftime. Sule opened the second half with a hook shot from the right block to give the maroon and gold a 21-point lead.

Harrell, however, wasn’t with the team when they returned to the court. The starting point guard sustained an unintentional hit to the head by Little Rock sophomore guard Markquis Nowell with 15:45 left in the first half and immediately requested out of the game. After being tended to by trainers on the bench, Harrell returned to the court and played another 6:13 in the period with a mark under his left eye. He exited to the locker room with the team at halftime and was not seen the remainder of the game. The team said Harrell was still being evaluated as of Friday without any specifics on the injury.

As @LeisTarry hypothesized, Mason Harrell was likely being evaluated for a concussion. Takes a hit from Little Rock's Markquis Nowell here and immediately asks out of the game @smdrsports https://t.co/jJNvBmj6wq pic.twitter.com/vdE48wrgTp

Harrell was later shown with a nasty mark under his left eye. Played another 6:13 in the first half, including the final 1:43, but did not rejoin the team after halftime @smdrsports pic.twitter.com/80QK2HMQF9

Harrell’s absence hurt the hosts a bit toward the end of the game as the Trojans began pressing on defense. Texas State turned the ball over nine times in the second half, leading to 15 fastbreak points for the visitors.

“I loved the effort of our players tonight,” Kaspar said. “Big energy on our players part. They came out and played with a lot of intensity.”

Sule finished the night with a career-high 26 points and led the team with 10 rebounds for his second double-double of the season. He was followed by Pearson, whose 15 points earned him a place in the 2,000-point club.

“It's major,” Pearson said. “It's an accomplishment but it's more of like an accomplishment for like fans and people who watch the game than me. I'm happy, I thank God but, you know me, I care about wins and losses.”