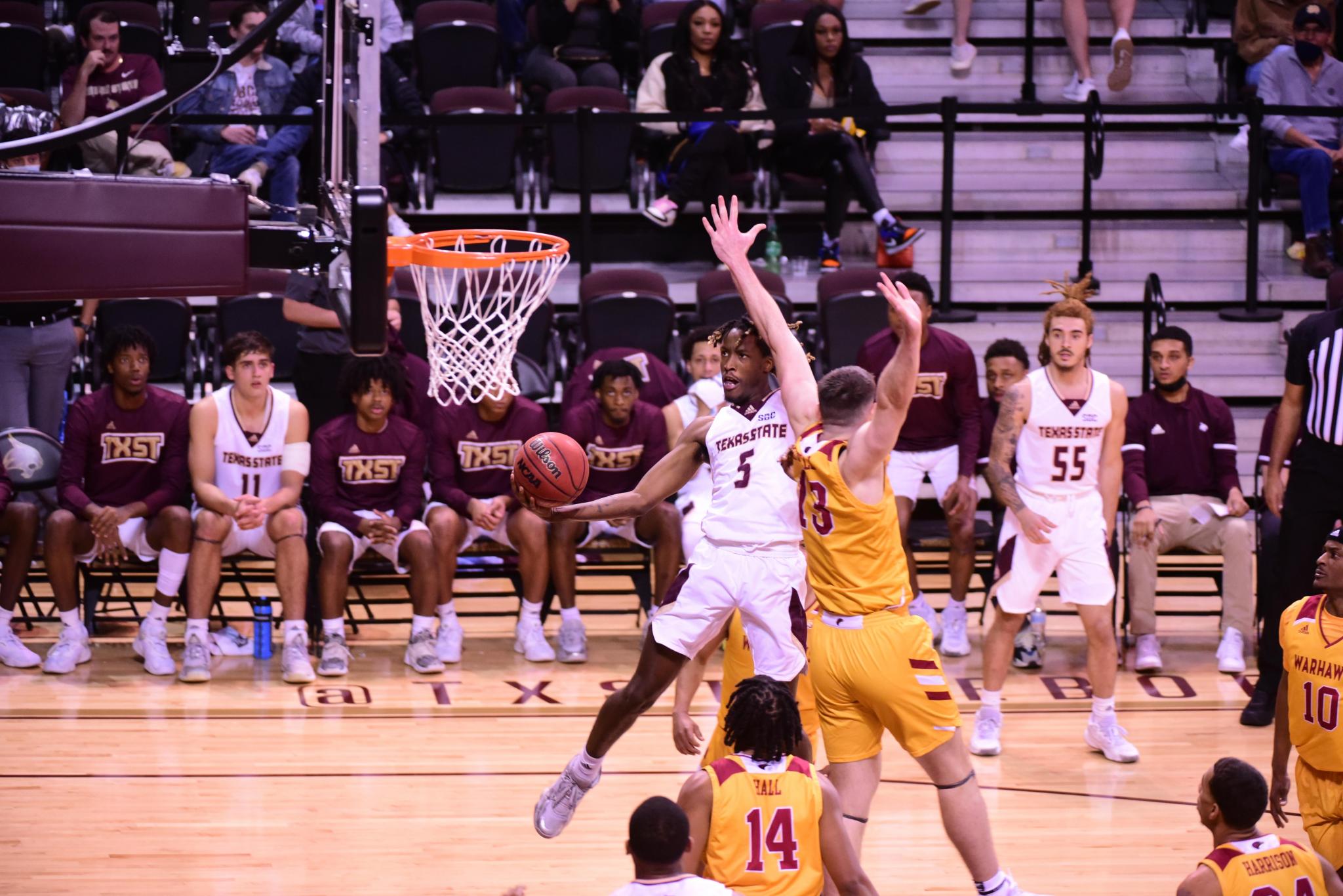 Texas State’s time off was dull.

The Bobcats’ players who were placed in the Sun Belt’s health and safety protocol had nothing to do for nearly a week. They weren’t allowed in any of the team’s facilities. They couldn’t get ready for any upcoming games — they were all canceled.

“You couldn't do nothing, really,” senior guard Caleb Asberry said. “Being in bed all day, I'm not gonna lie, it was boring.”

The extended time off, in which the team played just one game in 21 days, gave the maroon and gold a bit more anticipation for its next game. With its full roster well-rested and cleared from protocol, Texas State played one of its best games of the season in Thursday’s matchup against Louisiana-Monroe, taking an 80-56 win.

“It was a blessing, honestly,” Adams said. “I know me, for myself, I was just excited just to get back into the facility and get back around the guys, shooting, practicing, talking a little. That was rough but I'm happy we're all back.”

Head coach Terrence Johnson worried that the time away from each other would hinder his players’ timing. That didn’t appear to be the case on Thursday, though.

The Bobcats (10-4, 1-1 Sun Belt) looked as connected as ever, doling out 18 assists, tying their second-highest mark of the season. It led to the team hitting 50% of its shots on the night against a Warhawks team that was missing starting guards Andre Jones and Koreem Ozier.

Johnson said his main points of emphasis going up against ULM (9-8, 1-4) were to keep the Warhawks from getting hot outside and making sure Texas State crashed the boards. The hosts accomplished both feats, holding the visitors to 23.8% shooting on 3s and outrebounding them 42-31.

Asberry led the way, posting his first double-double of the year with 19 points and 10 rebounds.

“They really weren't boxing me out,” Asberry said. “Personally, I felt like we really got down and paid attention to the scout and understood what everybody had to do. And I feel like our defense was good today, it was great. We were flying around, blocking shots and rebounding pretty well.”

Three other Bobcats finished the night in double-digits — Adams and senior guard Mason Harrell with 14 points each and fifth-year senior forward Isiah Small, who earned 13 points, seven rebounds and a steal.

Texas State, now with its first conference win of the season, plays again on Saturday at 4 p.m., hosting Louisiana (8-6, 3-1) inside Strahan Arena. Johnson said it’s typically one of the program’s toughest games on the schedule from year to year — the Ragin's Cajuns won three of the teams' four meetings last season.

With the Bobcats back and active again, it’ll be anything but boring.

“It's a Bob Marlin team. They're gonna come in here hungry and very physical,” Johnson said. “You know, it's gonna be an exciting game. I expect my guys to come out and fight and compete. I mean, we're a little bit behind right now. You know, we've got a loss and we essentially lost three (canceled) games that we can't get back. So we gotta take advantage of every situation.”