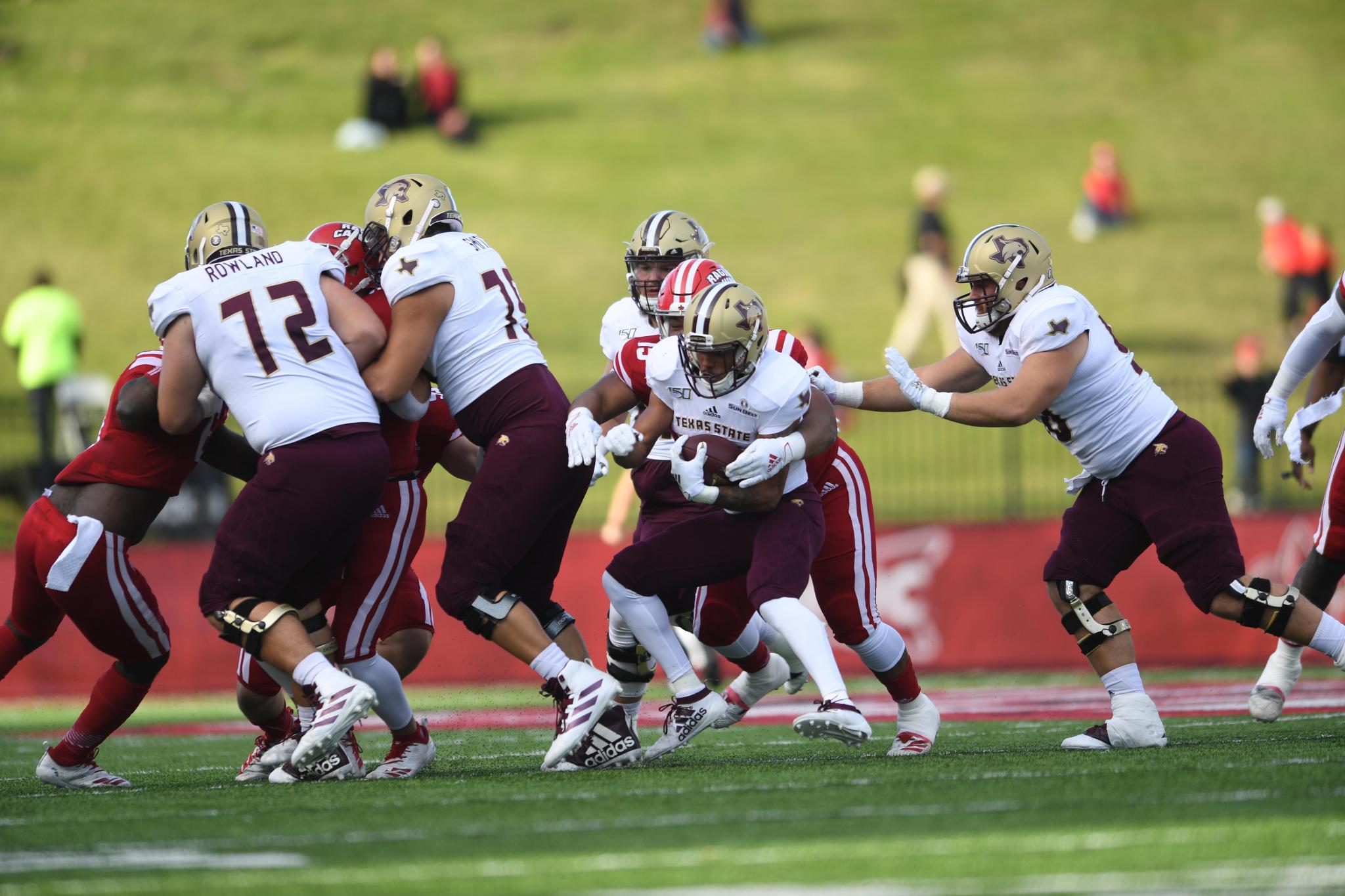 Bobcats roughed up by Ragin' Cajuns, 31-3

Texas State had to slow down Louisiana’s rushing attack.

The Bobcats did that for the most part during Saturday’s matchup in Lafayette, Louisiana. The Ragin’ Cajuns were held to 6.0 yards per carry and 296 rushing yards, both below their season averages. But in the moments the maroon and gold let up, the hosts ran away with it as they took a 31-3 victory.

Both defenses came out strong to begin the game. Both offenses combined to gain 136 total yards. Louisiana only averaged 5.7 yards per carry on seven attempts. Neither team moved into scoring range during the period and went into the second quarter tied 0-0.

The Ragin’ Cajuns’ running attack began picking up steam, though. Midway through the second, Louisiana handed the ball off five straight times for 10 yards and a first down. Junior quarterback Levi Lewis connected with redshirt junior wide receiver Jalen Williams for a 19-yard pass to the Texas State 39-yard line. Junior running back Elijah Mitchell capped off the drive two plays later, carrying the ball the rest of the way for the first score of the game.

The Bobcats answered immediately. Sophomore quarterback Tyler Vitt, making his third start of the season, completed an eight-yard pass to sophomore wideout Trevis Graham Jr. on the first play of the next drive. Senior running back Anthony D. Taylor picked up four yards on a run two plays later and got an extra 15 on a facemask penalty by the Ragin’ Cajuns. Another facemask flag helped Texas State enter the Louisana red zone before the drive stalled out at the hosts’ 15-yard line. Senior kicker Joshua Rowland made a 33-yard field goal to cut the lead to 7-3.

But Louisiana kept attacking the ground game. The team picked up another three points at the end of the first half with a 46-yard field goal by redshirt senior kicker Stevie Artigue. The Ragin’ Cajuns went on to score on a 24-yard touchdown pass from Williams to senior tight end Nick Ralston. The offense ground game exploded for 7.5 yards per carry on 16 attempts, as the team scored another two touchdowns to push the lead to 31-3. Texas State never retaliated, suffering their sixth loss of the season.

Vitt finished the game completing 24-of-34 passes, throwing for 206 yards and two interceptions and added another 38 yards rushing on 10 carries. Graham led the Bobcat pass-catchers with with six receptions for 52 yards Junior running back Caleb Twyford gained nine yards on five carries but headed for the locker room after the first quarter. Taylor took over running back duties, finishing with eight yards on six carries.

Senior linebacker Bryan London II led the team with 13 total tackles, five of them unassisted. Sophomore cornerback Jarron Morris led the team with two tackles for a loss and forced a fumble in the fourth quarter, recovered by senior defensive lineman Ishmael Davis.

Texas State will return home to host South Alabama next Saturday inside Bobcat Stadium at 2 p.m. It’ll be the first time the maroon and gold have played in front of their home crowd in nearly a month, the last time being a 24-14 loss to Louisiana-Monroe on Oct. 10.