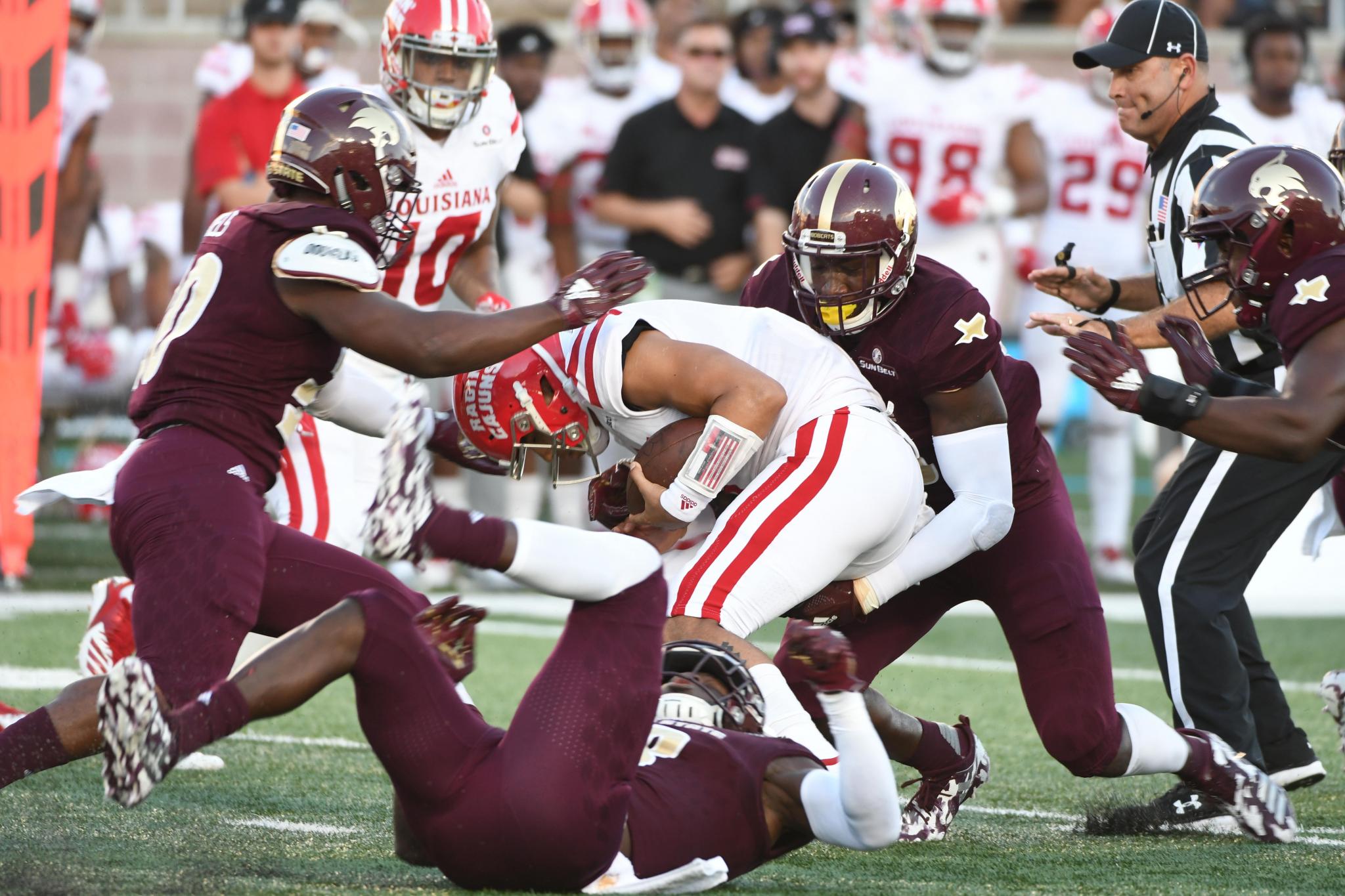 Bobcats show no signs of quitting despite struggles, losing record

Withers said the Bobcats are still playing with great effort even though they’ve only found the win column once in seven tries this season.

“I thought our kids fought hard,” Withers said at his weekly Monday press conference. “Again, I haven’t had any complaints with our effort throughout our entire season. Hopefully that will continue and I’m sure it will. We’ve got too many good kids for it not to. So, we’re expecting really good effort as we get to this part of the season.

Withers said he prides himself in never having a team that will quit.

“So, we’re still fighting everyday,” Withers said. “I thought we had a really good practice (Monday). Kids went out and worked really hard (Monday). So, we’ll continue to move on.”

After the loss to the Warhawks, Withers said defensively that they need to minimize on their mistakes.

“(ULM) had 100-plus yards on three plays,” Withers said. “And again, we play well when 11 guys play well. When we have eight, nine and 10 guys play well, we give up ‘cut-your-head-off’ type plays to our opponent. We’ve got to fix that on defense, where one guy making a critical error doesn’t cost us a touchdown. It happened to us in the first part of that ballgame, where one guy drops a coverage and we give up a touchdown. We can’t do that.”

“Offensively, it’s amazing, we had 16 plays on offense, consecutive plays, where we could not put that positive play in effect and then have another positive play behind it. So, it’s been positive play, negative play … That happened to us 16 times Saturday. You can’t be successful on offense when you’re doing that.”

Texas State named quarterbacks coach Brett Elliott as the new play-caller before the game against ULM.

Withers said making the move to Elliott was because the Bobcats were looking for a spark on offense.

“Brett’s been a play-caller before,” Withers said. “He was a play-caller for me at James Madison. He was really a play-caller here year one here. Just felt like that was good opportunity to, you know, we made several moves. We moved Aaron Brewer to center. We did a number of things. We just felt like we needed a spark. Maybe a different voice calling on a gameday. People ask me, ‘is he the coordinator?’ No, he’s not the coordinator. He’s the play-caller. That whole room coordinates the offense that’s how it works. That’s how it works on defense. That’s how it works on offense is there’s not one voice in that room, there’s a lot of voices trying to put together a gameplan.”

“Like I said, he’s done it before,” Withers said. “Again, I think, I judge a lot of times, how a guy does is just the rhythm that you’re in the ballgame. You know, we went into the ballgame trying to run the football more and we want to continue to try to do that offensively because that will only help our quarterbacks be able to throw better and keep us out of 3rd and long, which again, we got into because ‘good play, bad play, good play, bad play.’ But I thought he did a good job.”

Texas State played three freshmen on the offensive line against the Warhawks. The Bobcats had Morgan Moore start at right tackle, Jalen Momerelle at left guard and Kylar Cooks at left tackle.

Withers said the freshmen starting was partially out of necessity.

“All three are very talented kids in that recruiting class last year,” Withers said. They all showed up here on June the 4th and now they’re playing major college football — 70 snaps a game. They probably didn’t think that was going to happen to them. They’re all talented. They’re all athletic. I think Kylar Cooks is probably the most athletic of all our lineman in that class and maybe on our team besides Aaron Brewer … Those guys are going to take their lumps until they get the experience of playing. Same thing with Jalen (Momerelle). They’ve got to play.”

The Bobcats will wear throwback Southwest Texas State uniforms against New Mexico State on Saturday at 6 p.m. inside Bobcat Stadium.

Texas State will honor the past success of SWT during the game. Withers said it’s important to know and understand your program’s history.

“So, when we wanted to redo our building in here, we wanted people to be able walk in here and see the history of two national championships here. We want to get that up on our stadium so when people walk in here they say, ‘Oh, that place has had success here.’ I want our players to know that -- the success. Our players don’t really know it. Nobody talks about it. They see it when they walk up here upstairs but that’s the only place they see it. So I think it’s important that you study your history. You should never run from your history.”