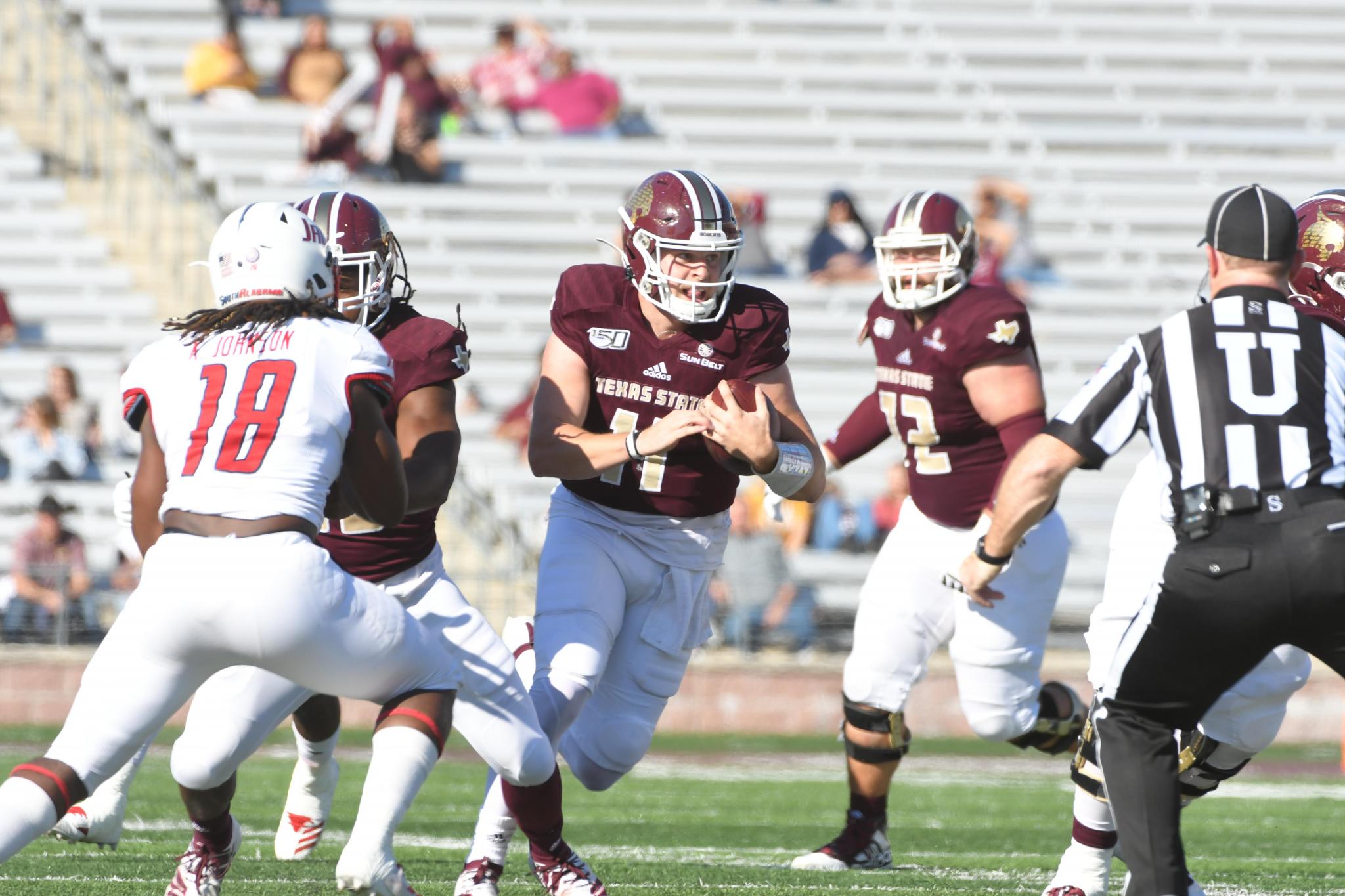 Bobcats shut out for first time in 19 years in loss to Louisiana, 45-0

Texas State was shut out for the first time in 19 years on Saturday, suffering a 45-0 road loss to reigning Sun Belt co-champion Louisiana.

“We all have to look ourselves in the mirror and do better than what we have,” head coach Jake Spavital said. “And that’s everybody in our organization. We have to continue to keep showing up. Again, a lot of credit to Coach (Billy) Napier and the program they’ve built here in Louisiana; it’s a solid program across the board. But, in order to beat them, we can’t have as many mistakes as we did. It got out of control at the end, because, physically, we just ran out of gas.”

Bobcats redshirt sophomore starting quarterback Brady McBride was held out of the game due to an ankle injury, allowing junior Tyler Vitt to make his season debut as the starter behind center. The maroon and gold only had one three-and-out all game, but gave up three takeaways and failed to score for the first time since a 16-0 loss at Portland State on Oct. 5, 2002.

“​​We did some wrinkles with (Tyler) Vitt,” Spavital said. “I was proud of how he came out and competed. You have to run the football and we did. We were doing some Wildcat packages and that had them thinking about doing some things. But, at the end of the day, they were just a lot better than we were and got after us at a pretty high level. I even thought that depth of that Louisiana team — their twos and threes — were pretty solid as well.”

Louisiana (7-1, 5-0) tried and missed on a 44-yard field goal on the ensuing drive and punted twice later in the game, but scored on all eight of the rest of their possessions.

The Bobcats’ longest drive of the day came at the start of the second quarter. The team started on its own 25-yard line and marched down to the Cajuns’ 29. Sophomore running back Brock Sturges took a hand off on first down, broke right and dashed 23 yards up the field. But Sturges coughed the ball up again as he was going down, just six yards away from the end zone. Louisiana recovered it to keep the maroon and gold off the scoreboard.

The visitors set redshirt sophomore kicker Seth Keller up to attempt a career-long 49-yard field goal on their next drive. But Keller’s kick was blocked at the line of scrimmage. Texas State never made it more than three yards past midfield again.

Vitt gave the ball up one more time, throwing an interception late in the third quarter. He finished the game completing 6-of-13 passes for 42 yards while leading the team with 94 rushing yards on 15 carries. Sturges added another 44 yards on seven rush attempts.