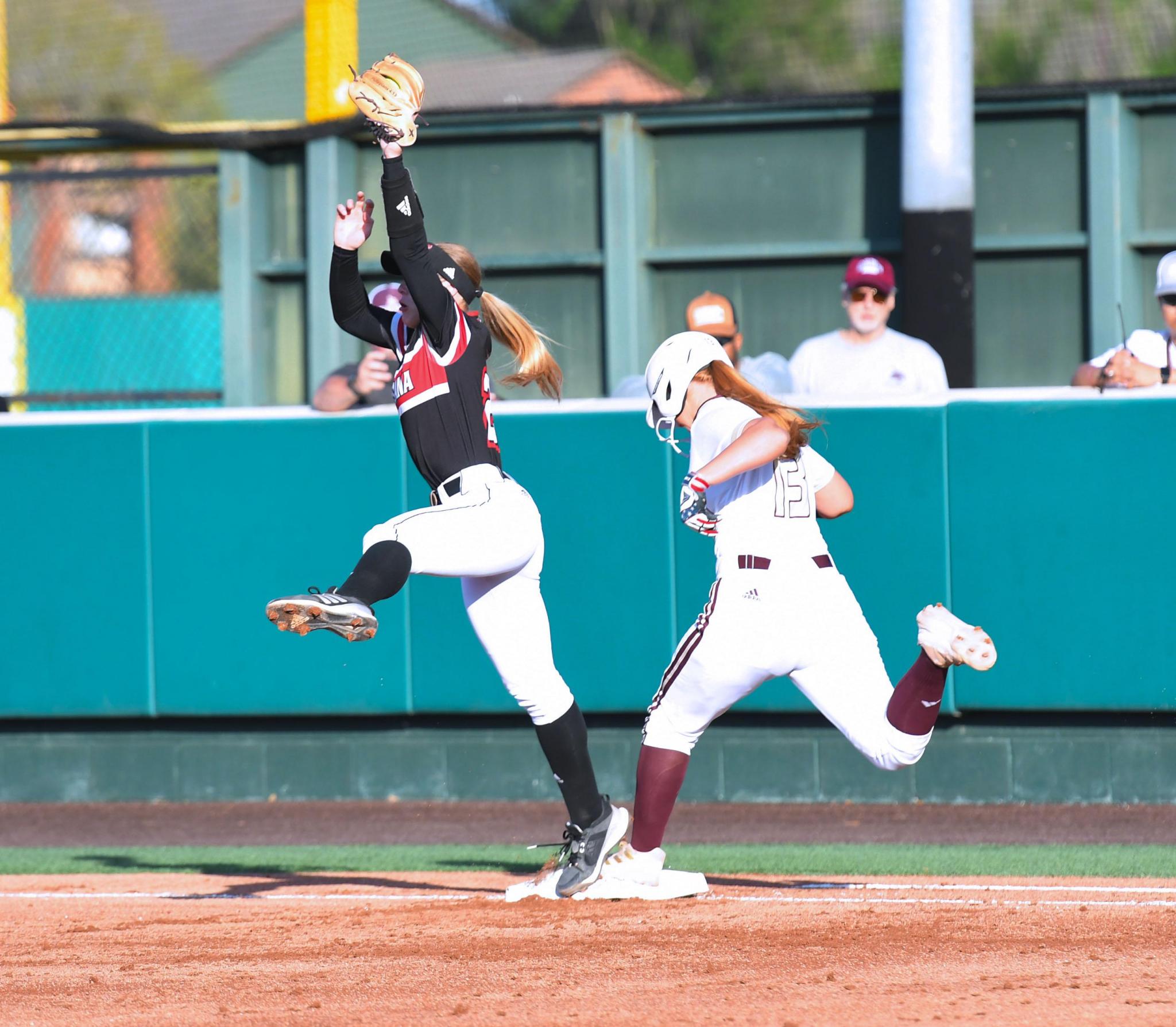 One pitch was all the difference in an intense defensive battle between Texas State and Louisiana on Friday.

Bobcats sophomore right-hander Jessica Mullins pitched a complete game, allowing just four hits and no walks against the reigning Sun Belt champions while striking out two. She surrendered just one score all night — a solo home run from freshman first baseman Stormy Kotzelnick in the top of the fourth inning.

That was all the Ragin’ Cajuns needed, though, as they shut the maroon and gold out on the evening to claim a 1-0 win in the series opener inside Bobcat Softball Stadium.

“It was a fun ballgame,” Woodard said. “Unfortunately, they capitalized on one pitch and we didn't. You know, timely hitting has been the key for us all year and not having timely hitting's probably been the bigger key for us not winning ballgames. So you know, we gotta do a better job there in the sixth and seventh both at the plate.

“I thought we played pretty decent defense the whole game ... That hasn't been kind of our strong point. We know that they're an aggressive team and so it was easier to play defense when we kept them off the bases. But I thought we made some key defensive plays early in the game that set the tone.”

Despite not scoring, Texas State (18-14, 5-5 Sun Belt) did manage to put more runners on base than Louisiana (22-8, 8-2), matching the Cajuns’ four hits and drawing three walks. The hits never came in a timely fashion, though, as the team went 0-5 at the plate with runners in scoring position and left six stranded.

Mullins still gave the Bobcats a chance to clinch it, even after giving up the home run. The ace began the game retiring the first seven batters she saw and ended it sitting down the last seven she faced. She provided momentum for the hosts all throughout the night.

“I mean, to only throw 75 pitches against that team is an unbelievable job on her part,” Woodard said. “It tells me she's attacking the zone and doing what she needs to do. So we gotta find ways to score runs so she can get the win in that game.”

The Bobcats put the game-tying run on base twice late in the game. In the bottom of the sixth, sophomore shortstop Hannah Earls slapped the ball up the middle of the infield to reach first. Two plate appearances later, junior third baseman Sara Vanderford was walked and an errant throw to second base allowed Earls to advance to third. Vanderford stole second base, hoping Louisiana’s catcher would try to pick her off and free up Earls to take home. The catcher didn’t oblige, but the go-ahead run was moved into scoring position.

The visitors got the final two outs in each of the next at-bats to escape the inning, leaving the maroon and gold with one frame left to rally back. Mullins kept the bases clean in the top of the seventh, leaving the team needing one run to tie and two to win. Senior first baseman Samara Lagway singled to centerfield in the second at-bat of the inning. Senior Cat Crenek came in to pinch run and stole second base. But Texas State couldn’t advance her any further, suffering the 1-0 loss at home.

While Woodard was pleased with her players’ defensive performance, she hoped to see them improve at the plate as the series progressed. The two teams will meet again on Saturday at 2 p.m. and finish the series on Sunday at noon.

“We have to execute a little bit better than we did,” Woodard said. “We didn't get some bunts down to move some runners, you know, we can't take strike three with runners in scoring position. There's a couple of things we have to do better tomorrow.”