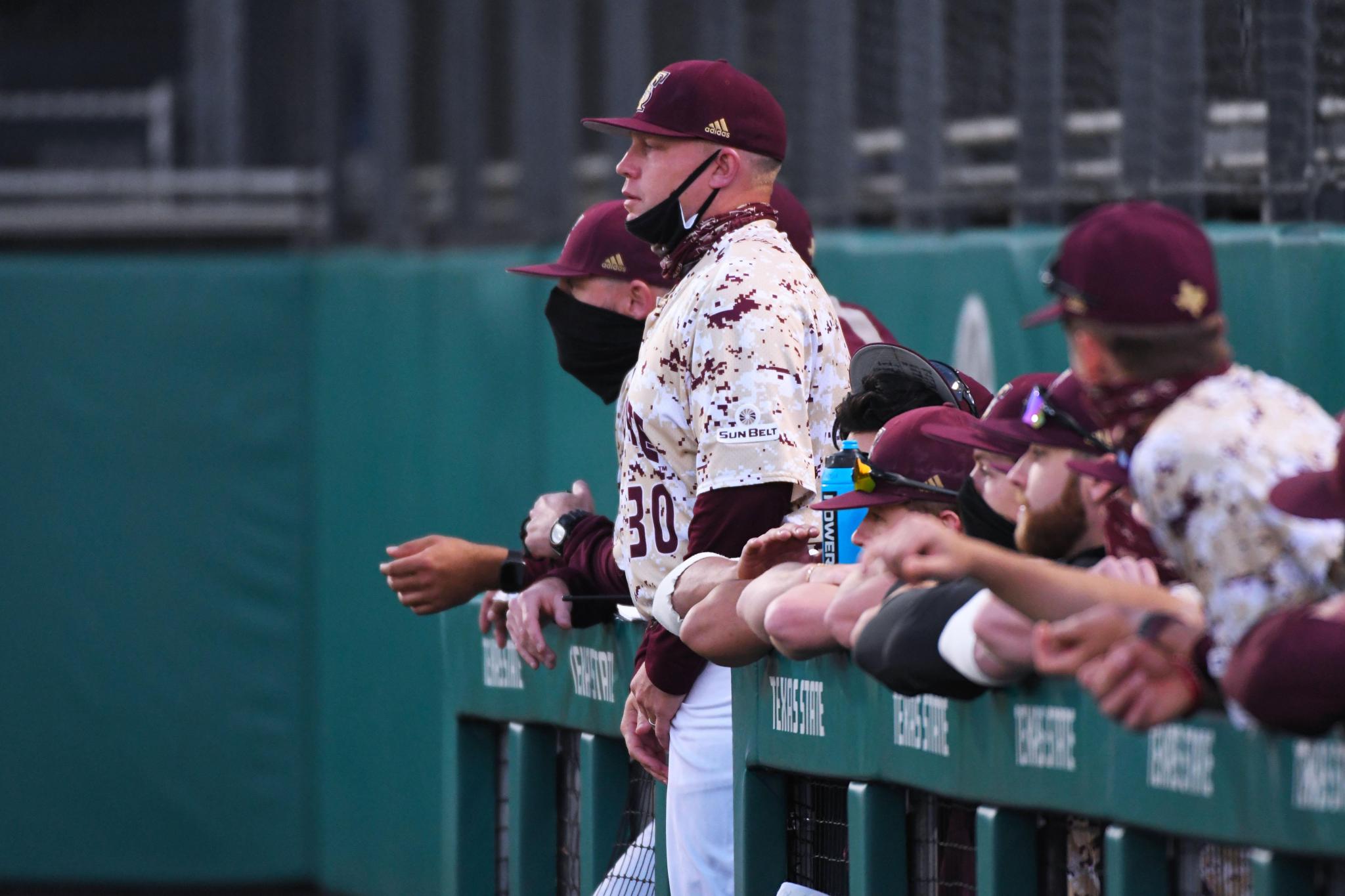 Texas State was in good position to take the series win over UT Arlington.

Senior right-handed pitcher Zachary Leigh threw a complete shutout against the Mavericks on Thursday for his first win of the year, helping the Bobcats earn a 2-0 victory. But UTA found its stride at the plate the next day, posting a 6-run frame in the top of the second inning and going on to win the game, 9-3.

Senior RHP Garrett Herrmann got the maroon and gold off to a strong start in Saturday’s series finale. But Texas State fell apart in the final three innings, losing the game and the series inside Bobcat Ballpark, 10-5.

“We just can’t let somebody come into our house and beat us around like that,” head coach Steven Trout said. “That’s just not what we stand for. It’s not what’s gonna happen in this program and we’ve got a lot of things to fix and it’ll get fixed.”

Herrmann, making just his second Sunday start of the season, made it through 6.0 innings, allowing six hits and one walk. The hosts’ bats were connecting, too.

Graduate left fielder Bryce Bonner singled to third base in the bottom of the third, allowing junior third baseman Justin Thompson to score on the hit and sophomore right fielder Jose Gonzalez to score on a throwing error. Senior centerfielder Chase Evans swung for a two-RBI single in the next inning and was brought home two at-bats later by Thompson to give the Bobcats a 5-0 lead.

But the team registered just three hits over the next four frames, failing to put the game out of reach for the visitors.

“That’s part of winning baseball, you gotta pull away when you’re ahead of them and find ways to get big hits in big moments,” Trout said. “And they got the job done today and we didn’t.”

After Herrmann gave up two singles to lead off the top of the seventh, Trout turned to the bullpen to close out the game. The team ended up using six relievers over the course of the final three frames, none of them lasting longer than one complete inning.

The Mavericks loaded the bases in the seventh, but were retired after scoring just one run. UTA led off the eighth with a solo home run, loaded the bases again, then cleared them this time with a grand slam by senior shortstop Josh Minjarez to give the team its first lead of the game, 6-5. The Mavericks added one more run in the eighth and three more in the ninth.

Gonzalez sent a solo homer down the left field line in the bottom of the ninth, but Texas State couldn’t keep the rally going, losing 10-6

“I think it’s a little bit of everything,” Trout said. “We gotta go back to the drawing board and figure out some things on all sides of the baseball, not just pitching, defense, hitting, all the above. And so, we gotta figure out how to go win baseball games. And so the guys are in there to do it, we gotta find a way to get that done.”

“You just go back to work,” Trout said. “You just put your cleats back on and you go back out there and you find ways get better, whatever that might be. And so, you can’t sit around because you got another really good team on Tuesday and then you gotta get back in conference on the road. It’s a big week for us, we haven’t won a road game yet, so a lot of adversity going on. So we gotta find ways to be tough and get through it and find a way to win baseball games.”