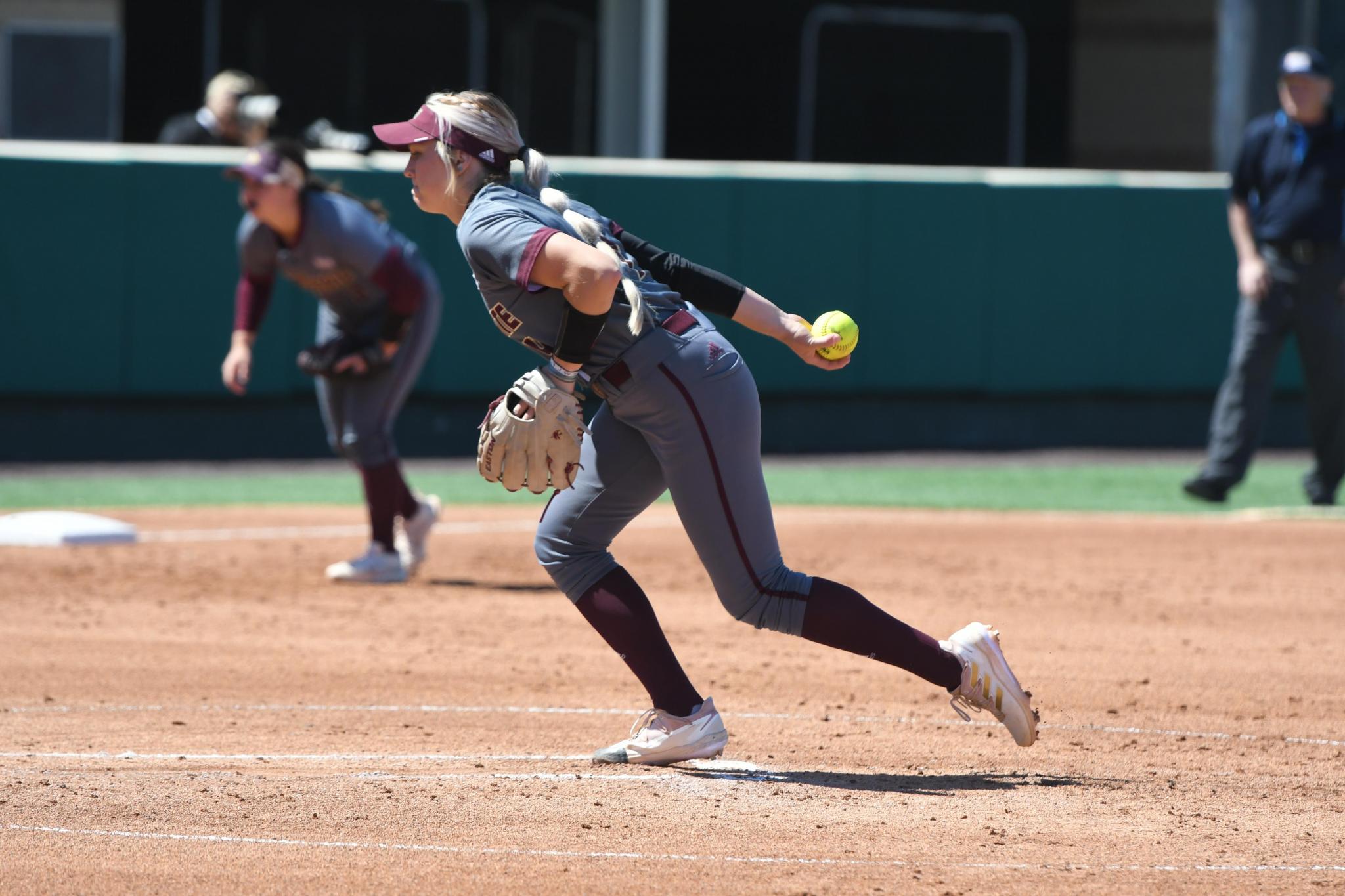 The maroon and gold allowed Appalachian State to do so this weekend and suffered a loss in its Sun Belt-opening series, winning one game and losing two inside Bobcat Softball Stadium.

“We have to take accountability for ourselves at this point, and everybody's gotta get better,” head coach Ricci Woodard said. “We gotta execute better, we gotta make better pitches, we gotta swing at better pitches. All the way around, we gotta do a better job.”

The hosts took the first game of the series, 5-0, which was moved from Friday to Saturday due to inclement weather. Senior first baseman Samara Lagway got Texas State on the board in the bottom of the third inning by knocking the first pitch she saw out of the park for a solo home run. Senior catcher/designated player Cat Crenek connected on a two-RBI double and went on to steal home later in the inning.

Crenek brought in another run with a single in the fourth to clinch the victory to finish the game with a career-high three RBIs.

“I've just found what's worked well for me in the box,” Crenek said. “And I mean, I do hitting, bunting, slapping, all of it. And I figured out what works for me and I just know where I need to put the ball and I just try to do my job.”

The momentum didn’t carry over into the second game of the day, though, instead swinging in the Mountaineers’ favor. App State (13-8, 2-1 Sun Belt) got off to a quick start, scoring two runs in the first three innings, and held on to take a 3-2 win.

The Bobcats batted 5-25 at the plate and drew one walk. The visitors went 8-29, drawing six walks.

Texas State did a better job on Sunday but struggled to take advantage with runners in scoring position, going 2-10. The Mountaineers built a 4-0 lead through the first six innings, allowing the hosts a single frame to make a rally.

Sophomore centerfielder Piper Randolph led off with a walk. Freshman left fielder Ciara Trahan followed it up with a single to second base — her third hit of the day. Senior right fielder Kylie George grounded out, moving both runners into scoring position.

Crenek used a sacrifice fly to let Randolph tag up from third for the Bobcats’ first run of the day. But the comeback attempt ended in the next at-bat, giving App State the 4-1 win.

Sophomore right-handed pitcher Jessica Mullins appeared in all three games for Texas State, starting the first and third and making a relief appearance in the second. In 13.1 combined innings of work, Mullins allowed 12 hits, five walks and four earned runs while striking out 17. She surpassed her former teammate, Meagan King, to move up to 10th on the program's career strikeout list.

“That's a kid that wants the ball. She threw over 200 pitches for us in this weekend series,” Woodard said. “You know, she's still gotta figure out how to execute all of those pitches the same and not let up. But again, as long as you've got a kid that wants the ball, we're gonna keep giving her the ball. You know, we gotta find a couple others that want the ball also and can execute their pitches. But otherwise, I thought she did a good enough job to keep us in ballgames.”

“We're a sport where you don't have to wait a week to do it again. We get to go do this again in two days and we've got to turn around quickly,” Woodard said. “But we gotta make some adjustments  for this weekend during the week.”