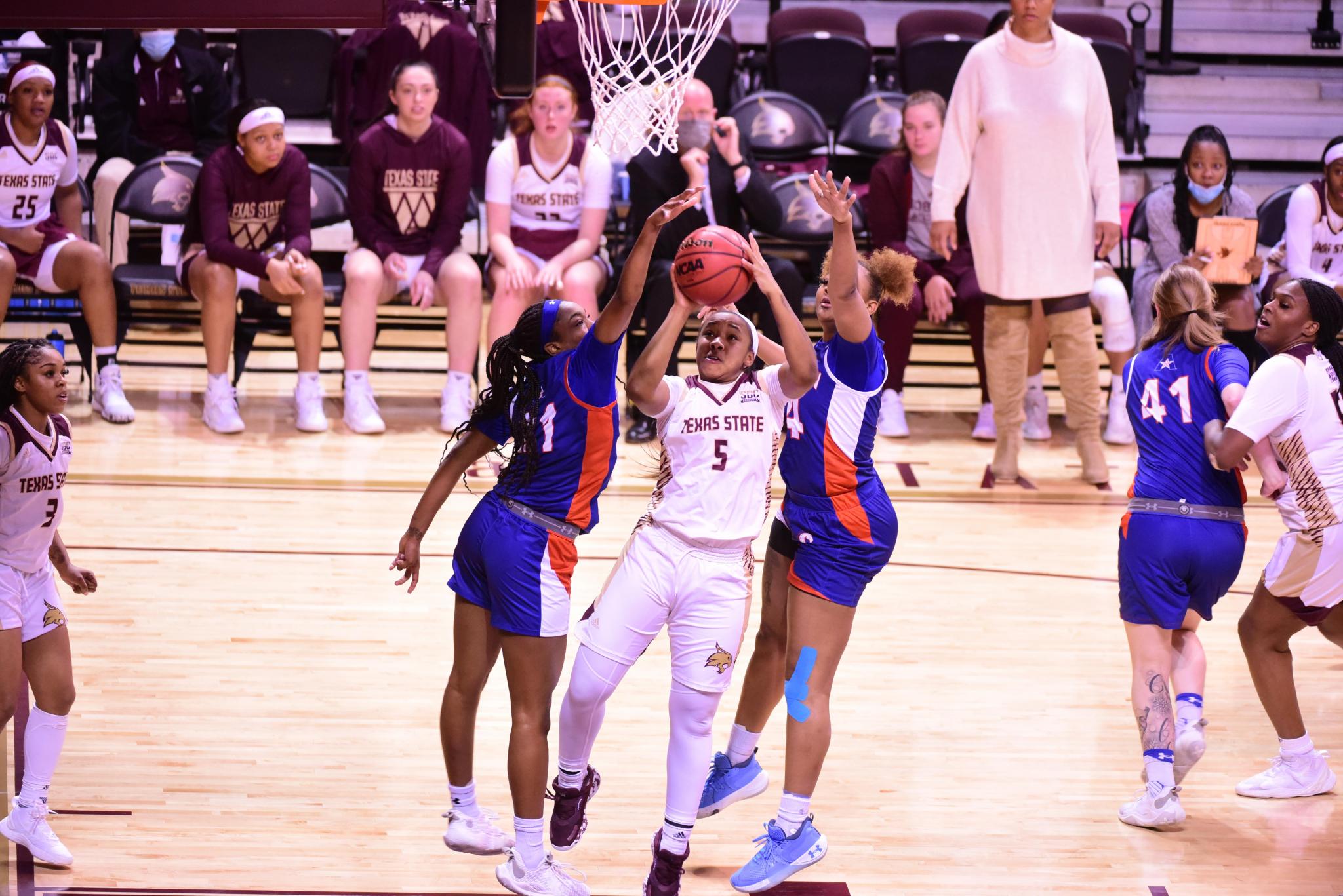 Texas State’s leads were erased in a blink, resulting in a pair of losses over the weekend.

The Bobcats led by five with just 27 seconds remaining in their road game at UT Arlington on Thursday. Mavericks senior forward Katie Ferrell shot a 3-pointer from the left wing that caromed high off the rim toward the baseline. Texas State redshirt junior forward Lauryn Thompson got to the board, but threw it behind her to avoid stepping out of bounds. UTA senior guard Terryn Milton got to it and kicked it back out to Ferrell, who knocked down the trey to make it a one-score game with 11 seconds left.

The Mavericks intentionally fouled three consecutive times to send Texas State into the bonus. Senior forward Da’Nasia Hood went 1-2 at the line to go up 67-64. UTA called timeout to advance the ball, then found senior guard De’Sha Benjamin wide open on the right wing, who canned another triple to knot the game up.

Milton forced another turnover on the Bobcats — their 26th of the game — that gave the Mavericks the ball on the baseline with 2.7 seconds to go. UTA sent a lob to Benjamin, cutting to the basket, who was fouled on the way up. Benjamin hit both free throws to hand Texas State a 69-67 loss.

The Bobcats couldn’t keep their mind on the disappointing ending for long, though. They had to play the Mavericks again just two days later.

“For me, it brought up memories of last season and having to play a team back-to-back,” head coach Zenarae Antoine said. “And although there's some similarities and there's some things that are pretty good, there's some things, too, that can be very tiring in some ways that you have to work through. And I think we saw a little bit of that (on Saturday).”

In San Marcos, the team did a better job of taking care of the ball, cutting its turnovers down to 16. Hood scored 13 points in the first half, helping Texas State establish an early lead that the hosts kept for most of the first two quarters, taking a 30-28 at halftime.

But Hood’s scoring started to dip a bit at the start of the second half, which helped the visitors jump in front.

“I think just my patience was working in the first half, just playing through the offense and with my teammates, crashing boards, trying to create more opportunities for us,” Hood said. “And I don't think I did terrible in the second half of it, but I know I can do a lot better of it, just to put the team in a better position. So I think that was my biggest struggle.”

The Bobcats missed three shots and committed three turnovers to begin the third quarter. The Mavericks scored off every mistake, opening up a 9-0 run in the first 3:16 of the period. Texas State senior guard Kennedy Taylor scored a layup to finally get the maroon and gold on the board, but UTA scored another quick five points to make it a 14-2 run and take a 42-32 lead.

Thompson provided a spark, scoring 10 points in the second half and helping bring the deficit down to six points late in the game. But the hosts were ice cold from both the 3-point line and the charity stripe, making just 2-24 from the former and 9-17 from the latter for the game. The poor shooting led to the Bobcats taking a 72-65 defeat.

“We definitely talked about the fact that (UTA is a) really good third-quarter team coming out at half. And that's really where we struggled,” Antoine said. “I feel like we struggled because we took some quick shots — and some weren't even bad shots. Some were, you know, layups that we missed.

“You might be wide open, but it might not be the right time to take the shot because people aren't in position to go rebound … These are things that we're having to sadly learn either on the fly or by watching film. And it's not to say that it's not a good look, because a lot of times those are good looks. But to tell somebody ‘Dang, turn that look down, move the ball some more,’ is really what I'm trying to impress upon the team. Because if you watch film, you will see it's quick shots and turnovers that really hurt us. If we clean that up, we're in a really good position.”

Hood finished the game with 21 points and 15 rebounds. Thompson added 14 points and six boards. Taylor had six points and handed out 12 assists with just two turnovers.

It wasn’t all bad for Texas State despite suffering the sweep against UTA (10-5, 5-2 Sun Belt). Johnson scored the 1,000th point of her career on Thursday and Taylor dished out her 500th assist on Saturday — two significant milestones for the pair of college graduates.

“Man, it's an honor,” Taylor said. “I just, you know, thank my teammates because without them I couldn't get this accomplishment.”

“It meant a lot. I've been through a lot, just at all the different locations and God just continues to bless me,” Johnson said. “And I've been around good teammates. Like, when you got a point guard that's giving you 12 assists, I mean, you know what I'm saying? It's easy to get that bucket. So it's all glory to God.”