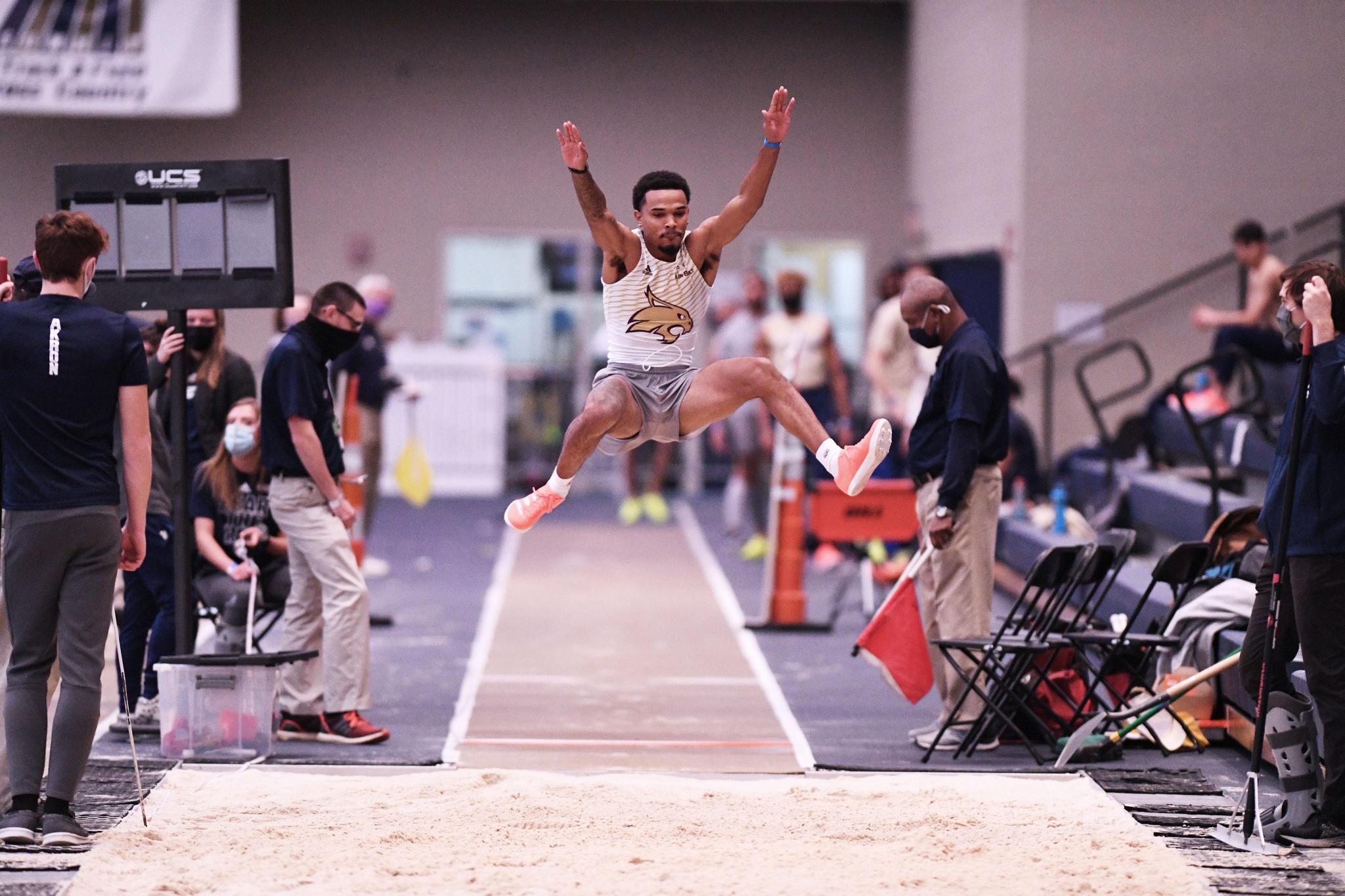 As a high schooler at Pflugerville Connally, Ronnie Briscoe was told he wasn’t good enough to earn a scholarship from Texas State. Now, he’s heading to Eugene, Ore., for the NCAA Division I Outdoor Track and Field Championships as a Bobcat.

This year will be Briscoe’s first trip to the championship round. He earned a gold medal in the 2018 Sun Belt Outdoor Championships in the long jump, as well as the 2020 conference indoor meet. He reached the NCAA Outdoor West Preliminary Round in both 2018 and 2019 and might have in 2020 as well had the event not been canceled by the COVID-19 pandemic.

At this year’s West prelims, Bricoe posted a personal-best distance of 7.71 meters (25-3.5) with a legal wind of 1.5 meters per second. Among the 42 athletes that competed in the West Preliminaries, Briscoe ranked 10th, advancing him to the next round.

His jumping coach, Fabien Corbillion, will be joining him on his journey to Oregon.

“I told him to keep sending me his progress and keep me updated as you improve and keep working,” Corbillion said. “And he did. He’s a hard worker, so we gave him a shot.”

Briscoe arrived at Texas State in 2018 and has worked to improve his skill to now be competing with the top jumpers in the world.

Briscoe had to overcome some challenges during this 2020-21 season. At the beginning of the year, he was injured with a high ankle sprain. After rehabbing and focusing on getting himself back healthy, he was diagnosed with COVID-19 a month later.

“COVID was really an eye-opener to where I mentally and physically wanted to be within myself. It messed up a lot of plans with the season that, honestly, could have turned out for the best for me. But we will never know,” Briscoe said via email. “It wasn’t hard to get back into the shape that I wanted to be in, it was more of a mental aspect for me. Sitting out so long and not being able to do anything really just messed with my mental above all.”

Briscoe’s coaches said the best word to describe him is “resilient.” He takes on and deals with challenges off the field that many people wouldn’t be able to do while performing at a high level.

“He has gone through a lot of things in his life, and he has a way of dealing with things that works best for him in life and on the track,” Corbillion said. “Either you fall or you rise, and he always chooses to rise.”

Briscoe is liked by his coaches and teammates. Off the field, he likes to spend time with his girlfriend and best friends. He takes pride in building relationships so he can push his teammates, as well as himself to be better every day.

As an athlete growing up, Briscoe has had people along his path help mold and inspire him to be the athlete he is today. As a young man, he looked up to Christian Taylor, the reigning Olympic champion and current World Champion in the triple jump.

In his college career, he has had a coach that has helped develop him as a person first, then an athlete.

“Coach Fabe has been nothing short of a working miracle for my life. He has helped shape and mold me into the young man I am today. He picked me up at times when I was at my lowest and for that, I will forever have a lot of love for Fabe,” Briscoe said. “The athlete I was coming into my collegiate career, compared to the athlete I am now — not just the athlete part but also the human aspect of our well-being, are completely two different people. I can honestly say that I have changed for the better. I give thanks to Coach Fabe for that!”

As they near their departure date, Briscoe and Corbillion continue to work together in preparation for the NCAA Championships.

“We’re not focused on the outcome. We’re focused on executing and enjoying the experience,” Corbillion said.

Briscoe is most excited about experiencing the atmosphere at one of the biggest stages there is in sports, “Tracktown, USA.”

“I am excited just being able to witness the new Hayward Field for the first year since the remodel and most of all, being able to compete in such a historic monument for track & field,” Briscoe said. “Nonetheless, I’m excited about what God holds for me at this meet. Like I always say, God’s timing!”

On June 9, Briscoe will compete in the preliminary rounds of the NCAA Outdoor Division I Track and Field Championships. He will be able to display his talents against the best in the world.

Briscoe is competing to win on the field, but the main goal for him is to win in life. On his journey, he will take a meaningful quote that he uses for motivation: “Last one, best one.”