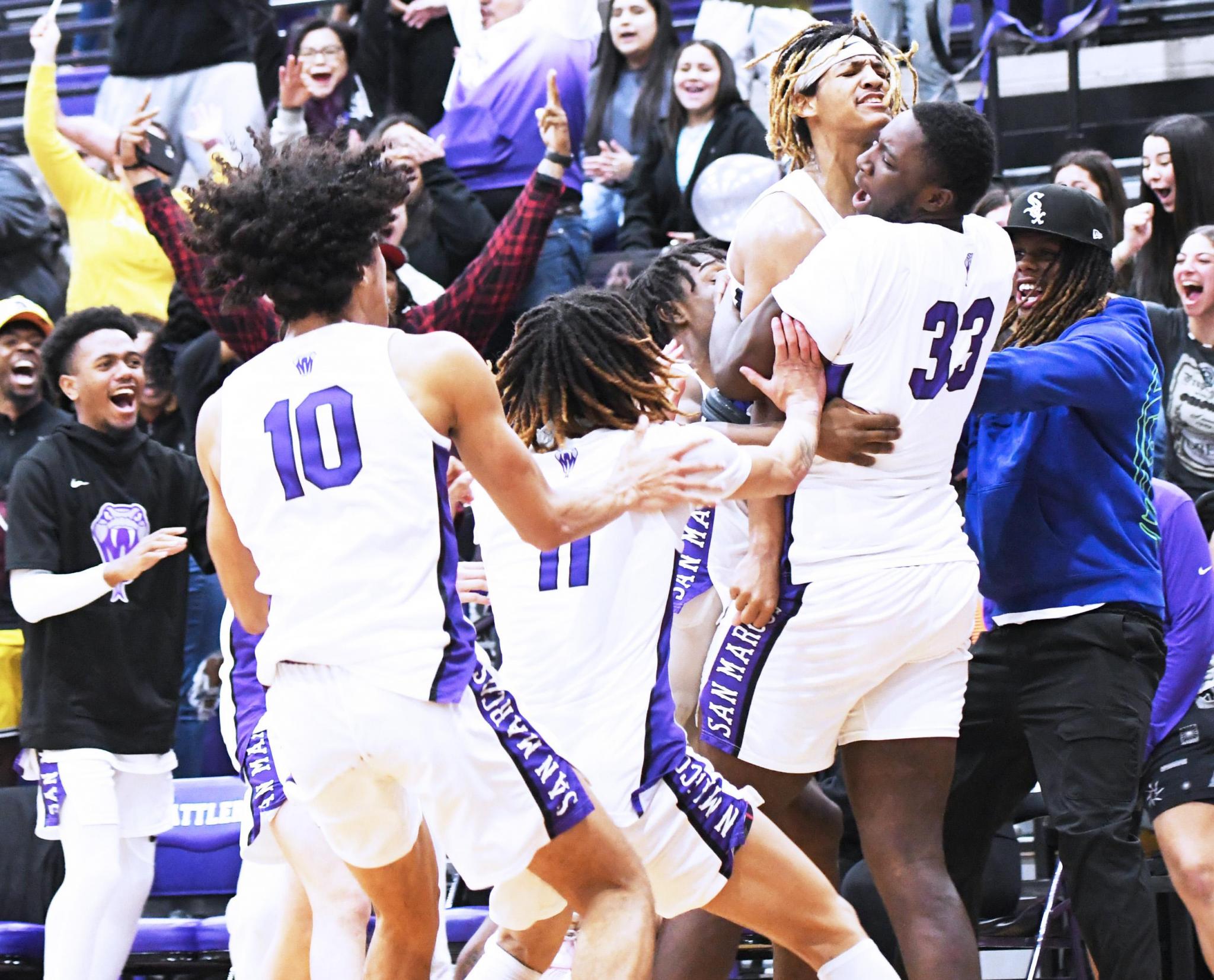 Senior guard Jayven Cofer knocked a buzzer-beating 3-pointer to push No. 11 San Marcos to a district-opening win over Schertz Clemens, 54-51, on Friday inside the “Snake Pit.” Above, the Rattlers celebrate after Cofer drilled the game-winning shot. Below, Cofer drives to the basket during Friday’s win over the Buffaloes. Daily Record photos by Gerald Castillo

AT THE BUZZER: Cofer sinks buzzer-beating 3-pointer to push No. 11 San Marcos past Clemens

In front of an electric crowd inside the “Snake Pit,” San Marcos senior guard Jayven Cofer sank a game-winning buzzer beater from beyond the arc to knock off Schertz Clemens, 54-51.

With the game tied at 51 with 24 seconds left, Rattler head coach Dan Miller told his during their final timeout to get the ball into senior point guard Kaden Gumbs’ hands and let him make the play. Gumbs drove to the basket with under 10 seconds remaining and dished out to an open Cofer, who drilled the game winner to extend No. 11 San Marcos’ winning streak to 20 games.

“Every time Kaden has the ball in his hands, I trust what he is going to do with the ball,” Cofer said. “He was either going to pull up and he found me, trusted me, and I knocked it down. He is a great teammate.” 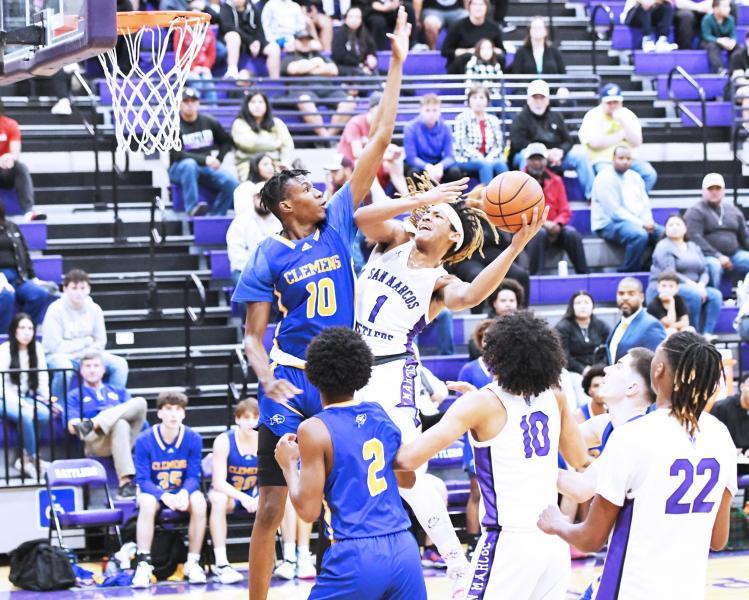 To start the game, the message from Miller to his team was to be aggressive and get the ball to the rim. Led by seniors Malik Presley, Mateus Perkins, and Cofer each of them were able to convert an ‘And 1’ play at the rim, forcing the Buffaloes to foul and getting a shot at the charity stripe.

“We are going to get everyone’s best every night,” Miller said. “Credit goes to Clemens tonight, they played great defense. We were juiced, maybe too juiced at times missing shots we normally make because it was the first district game, it’s always good to get that first district game out of your way.”

The aggressive Rattlers took a 21-5 lead into the huddle after the first quarter.

The Buffaloes were able to come out with a little more aggression themselves in the second quarter as they got into the paint against the Rattlers and forced San Marcos into foul trouble. That aggressive play was able to get the score evened at 30 apiece late in the second quarter before Gumbs came up with the steal, which he took coast-to-coast to give San Marcos the 32-30 halftime advantage.

“They zoned us tonight, at least half the game, which we thought they might,” Miller said of the Buffaloes’ game plan versus their first meeting earlier in December. “We were still able to get some good looks. We just at times missed some shots that we normally finish.”

San Marcos outscored Clemens, 12-7, in the third, however, Clemens fought back and tied the game in the fourth, holding the Rattlers to just seven points before the Cofer’s buzzer-beating 3-pointer.

Led offensively on the night by Cofer, who had a game-high 19 points and Gumbs who tallied 16 points in the game. Presley added a double-double with 10 points and 14 rebounds for the Rattlers.

“We have to rebound better going forward in district, I don’t think we did a good job at getting the 50-50 balls tonight,” Miller said. “It was one of those games where you just have to find a way to win, and that is what we did. I am so proud of that.”

“We know that each and every district game may be like this one tonight,” Miller said. “We have to be focused in each and every game. I love this group and I know they will be.”