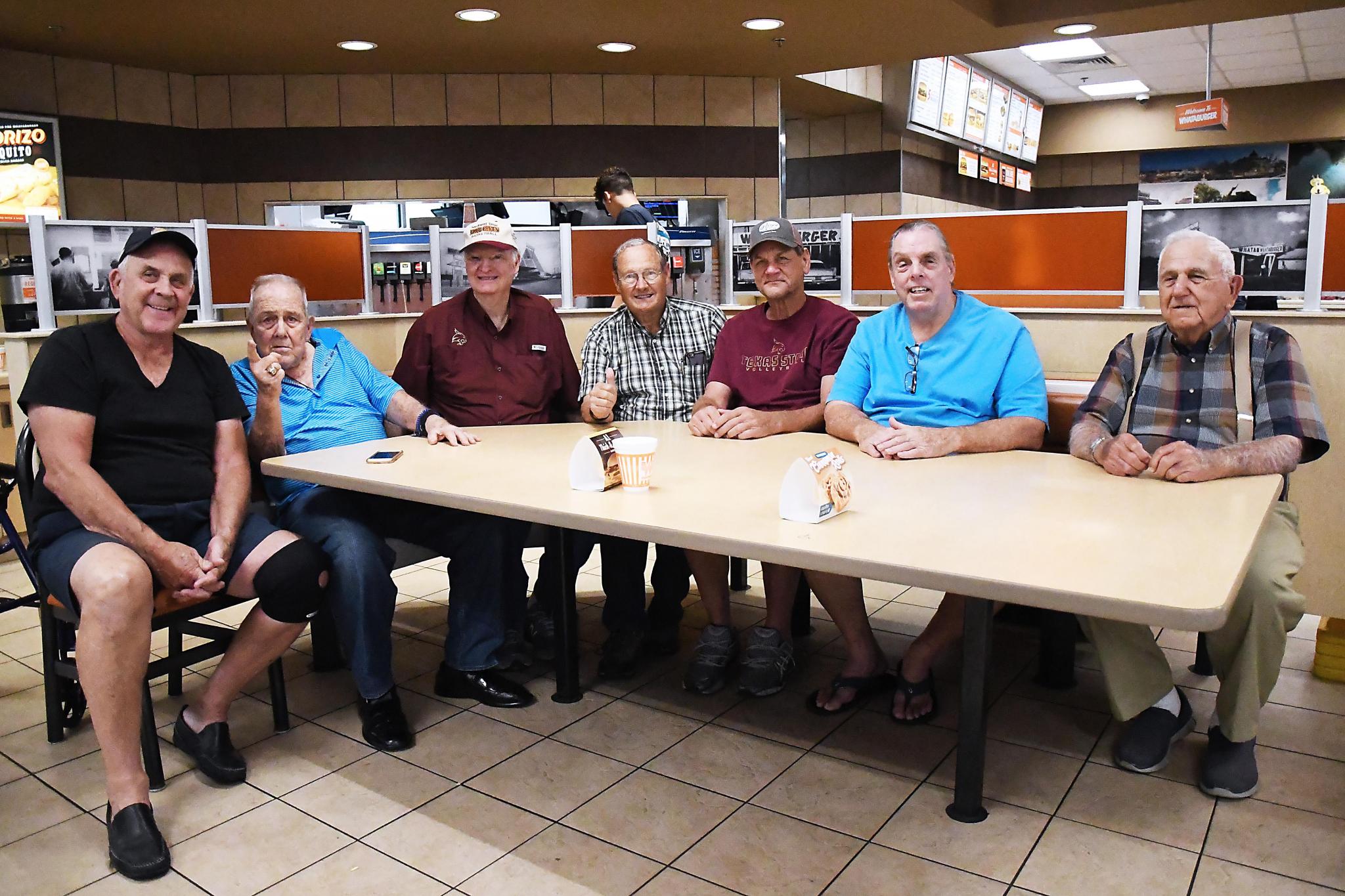 Their stories are of myth and legend.

It's said if you listen closely you can still hear their feats of athletic prowess echo along the river and onto the campus of Texas State University, some more than 50 years ago.

Decades later that devotion hasn't diminished and its returned at the most unlikely place — Whataburger. Yes, Texas' orange and white striped culinary cathedral plays host to a sizable gathering of none other than Bobcat Royalty every Tuesday morning.

But orchestrating a confab of this sort doesn't come by chance. Its "ringleader" is Vernon McDonald, former point guard for the Bobcats who was all-conference 1950-52. McDonald also coached alongside arguably one of the most successful coaches in the school's history, Coach Milton Jowers.

"He was the best coach that ever lived," McDonald said, sitting in a booth with several Bobcat athletic alumni. "When he died a part of me died."

In 1960 Jowers and his team won the NAIA National Championship. Known as Southwest Texas State in those days, the administration asked Jowers to take over a floundering football program that finished earlier at 2-8. It was said Jowers said to give him three years. And in his third year, the team finished with a 10-0 record and ranked first in the nation.

"I was lucky," McDonald said. "[Coach Jowers] got the best out of you and everybody wanted to play better for him. He was the heart and soul of the team."

"I remember a time, we were about to play Stephen F. Austin, and before the game started Coach Jowers walked over to the coach and ordered him to stand; he was about to get his butt whipped," McDonald recalls.

The reason why was because the coach had shared a film of the Bobcats with an upcoming opponent.

The thrashing didn't occur, but it wasn't for a lack of effort on Jowers behalf.

"He was as mean as they came," McDonald said. "Once he had a heated discussion with the referees at halftime of a game we were playing. He didn't think they were being fair. Let's just say in the second half things improved."

Jowers became Athletic Director full time following the '63 season. Nine years later he passed away from a battle with cancer. He was just 58.

Reece Morrison began his football career as a Rattler at San Marcos High School. Just after high school, following a visit by Coach Jowers, he later became a Bobcat in 1964.

"Coach Jowers didn't really have to convince me," Morrison said. "I was dating a young lady who later became my wife, so I wasn’t thinking about going anywhere — except here."

Morrison shared his most memorable collegiate moment came his senior year where the team was ranked No. 1 in the nation in small colleges.

"We were 9-0 and Texas A&I was 9-0 and we played them on their home field and lost," he said. "That game I'll remember most, and most of my teammates will tell you the same."

But, Morrison's career wouldn't stop there. The 6-foot running back had made a name for himself to the extent he was drafted in the third round by the Cleveland Browns.

"It blew my mind," Morrison said. "The opportunity and chance to play professional football. Most people dream about that who are involved in the sport."

He said it was crazy going from a Wing-T style offense he was used to playing, to a pro-style offense.

Morrison said competition was fierce. Lee Roy Kelly played ahead of him as the starter.

"You make a mistake on the field and you could be gone," he said. "I had just gotten married. Everything we had was in the trunk of the old car, so it was a lot of pressure. If I were to be cut I was ready to rock and roll somewhere else."

Morrison said things improved his second year. In fact, one of his best games played came against the Washington Redskins. Vince Lombardi was coaching them then, too.

Kelley was injured and Morrison got the start against Washington. He ran for 131 yards on 24 carries.

In his third year, Morrison was groomed as both a fullback and halfback. Similar in a lot of ways he said, but different, too.

During his professional career, Morrison played 1-1/2 years for Paul Brown in Cincinnati where Bill Walsh was the offensive coordinator.

All total he played seven seasons in the NFL. Morrison was inducted to the Texas State Hall of Honor in 1985.

Don Forester played both football and basketball for the Bobcats from 1955-59.

"It wasn't all that uncommon," Forester said. "However, as a freshman, the seniors would rough you up pretty good during the football season. When football was over it was the same thing again in basketball."

Forester said he never planned on being a teacher until he got a scholarship to play at then Texas State Teachers College.

"I ended up coaching because of Coach Jowers," Forester said. "He knew Jimmie Littleton at South San Antonio so after college I ended up there. Coach Jowers knew everybody."

Forester said his most memorable moment was playing in the championship finals in 1959. Unfortunately, the team lost.

"I was the only one that graduated that year and the next year the team won the championship," Forester said. "I kept up with them as best I could, coaching in San Antonio. It was the last big winning team they had.”

Forester went on to coach at Southwest Texas State and was inducted in its Hall of Honor for both sports in 2004.

The speedster of the group

George Wilhite had speed and he proved it by being one the fastest sprinters in the school's history.

"I ran from 1962 to 1965. We won the conference and relays in the first three years," Wilhite said. "I remember a kid from Big Springs, a pretty hot sprinter, and he was a freshman like me."

Wilhite said his competition ran for East Texas State University and won the conference in the sprints the first three years.

"My senior year we ran at conference — his home track — and I beat him in both sprints and tied his record in the 100-yard dash with a time of 9.4," Wilhite said. "And that was running on cinders."

After college, Wilhite went into the Air Force. After leaving the service he spent the next 26 ½ years working for the Austin Police Department. Now retired Wilhite still enjoys giving flying lessons.

Bobcats until the end

Jim Duncan and Gary Pack say they will be Bobcat fans until the day they die.

"I'm a Bobcat fan until they put my ashes in the river," Duncan said. “I'm a diehard Bobcat."

Duncan played football from 1968-71 and was the team's quarterback.

"We were third in the nation and tied for the conference with Howard Payne," Duncan said. "I support this team and go to all their games. What they are going through today is nothing a little age won't cure. They’re young and make youthful mistakes, but they'll get there."

Duncan and Pack’s most memorable moment was when Duncan ran the ball in for a touchdown during an important win for the Bobcats.

"The game was against Texas A&I and I blocked the man inside enabled him to score the touchdown," Pack said. "Four years of playing football and it came down to a single, a defining moment. I remembered turning around and seeing Jim all by himself, running into the end zone."

So what separates good from great these Bobcat icons would say is determination and a work ethic.