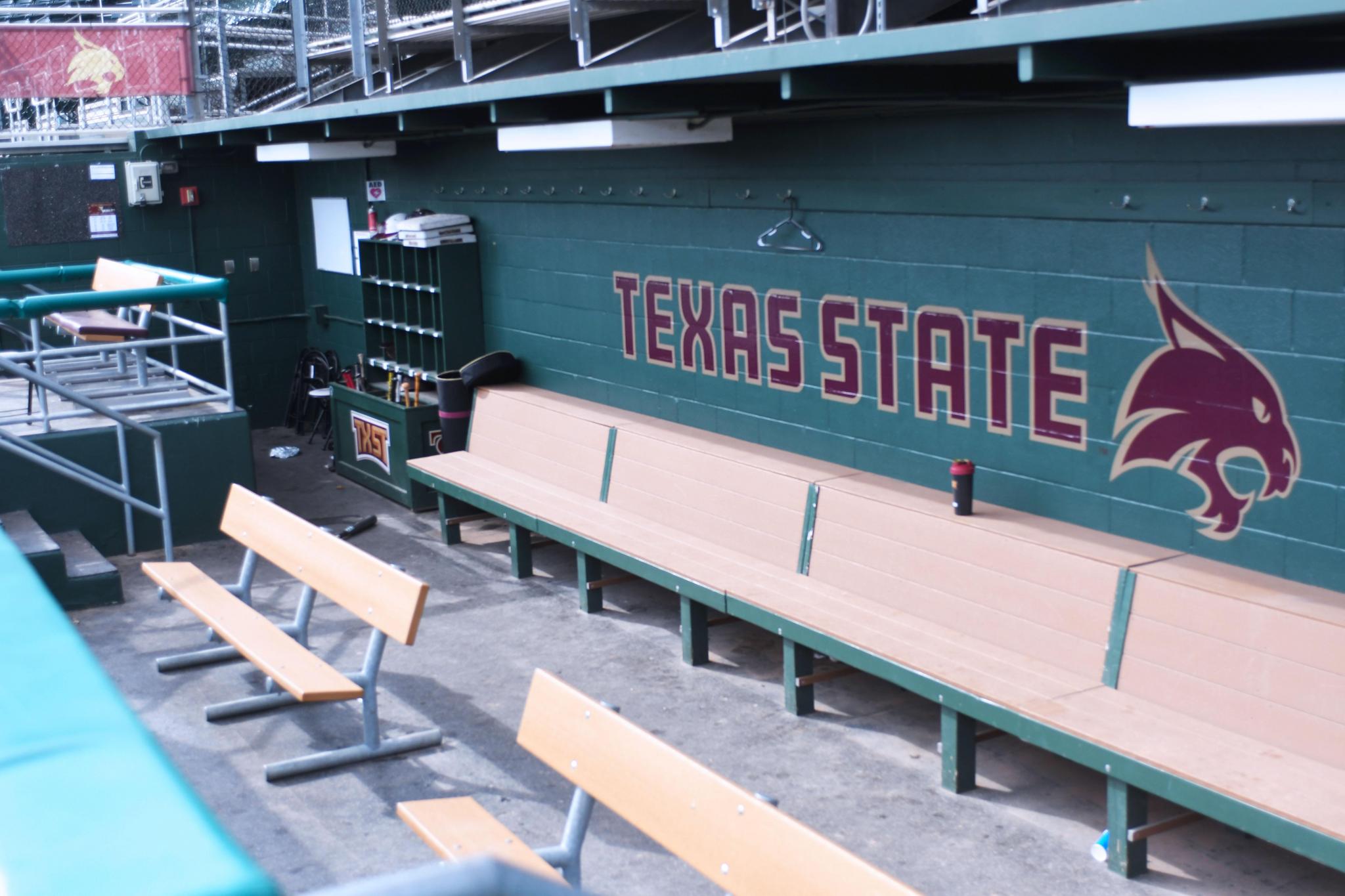 Covering the uncertainty of sports in the year of COVID

This past Monday was the last day I didn’t have a game to cover.

I watched Texas State Baseball run-rule No. 11 TCU in seven innings on Tuesday, 11-1. I caught up with Texas State Volleyball, which played in its first home match of the spring on Wednesday, losing to No. 6 Baylor, 3-0. The past two days I watched Texas State Softball take out BYU, 2-1, and UTSA, 5-0. My week will finish with watching the final two games of the baseball team’s home series with Houston.

This coming Monday will be the next day I don’t have a game to cover. It’s been one of my heaviest workloads of the year. I’ve written seven different articles this week (4,695 words combined), edited five more and designed eight pages of the newspaper. I’m exhausted.

But what I’ve learned from a year of covering sports in a pandemic is that this is still so, so much better than the alternative.

I didn’t ask a single question about COVID-19. At the time, I knew of the virus and knew that there were a growing number of cases in some hotspot cities but it all felt so far away. I posted my story on the baseball game at 11:47 p.m. and went to sleep excited to do it all again the next day.

When I woke up, coronavirus was on the sports world’s doorstep. At 3:31 p.m. on March 11, 2020, the NCAA announced that only essential staff and limited family members would be allowed at the men’s and women’s basketball tournaments. I wondered if schools would mirror that decision across all its competitions.

I texted two Texas State sports information directors — Phil Pongratz and Keonte’ Herrera — to see if the Bobcats’ baseball and men’s basketball games were altering any attendance policies. At 3:45 p.m., Pongratz told me the baseball game set for 4 p.m. was still on and open to the public.

An hour later, Herrera told me that the basketball team was still playing its Sun Belt quarterfinals matchup against Appalachian State at 7 p.m. and that fans would also be allowed in the building, but that the conference would decide on future tournament games the next day.

After turning in Thursday’s sports page, I arrived at the baseball game in the bottom of the second inning. The Bobcats had just taken a 1-0 lead over Prairie View A&M. I stayed until the end of the sixth, the hosts up 10-3 after a grand slam from junior left fielder Isaiah Ortega-Jones, and walked across Charles Austin Drive from Bobcat Ballpark to Strahan Arena for the basketball game.

No. 3 seed Texas State defeated No. 6 seed Appalachian State, 85-68. It was the best the team looked all season. During the game, the news broke that both award-winning actor Tom Hanks and Utah Jazz center Rudy Gobert contracted COVID-19. Sitting in an arena with 6,308 in attendance, the second-largest crowd in program history, suddenly didn’t feel very safe.

The Bobcats were scheduled to depart for the final two rounds of the tournament taking place in New Orleans the next day, slated against No. 2 seed South Alabama — meaning that senior guard Nijal Pearson, the team’s all-time leading scorer, had likely played his last game in San Marcos. Pearson was the main focus of the postgame presser. Head coach Danny Kaspar said he’d never felt more confident that a team would win the league title and advance to the NCAA tournament.

Kaspar was asked how the coronavirus could impact the team. It was the first time I remember asking a question about COVID.

“Look how it affects everything. Our economy, our livelihood, our sports, our academics, people going to class. We're telling these guys, you know, carry a bottle of hand cleanser or whatever. I mean, every time you open up a door to go in a class, how many people have touched that doorknob? So we're very aware of it, we're very aware of it. You know, if we don't play in front of anybody — I mean, family can be there. They gotta let our families in. So that's what's important.”

After the presser, I returned to the media section to write my game story. Director of Basketball Operations Alex Hausladen stopped by to chat with me about the win and the Rudy Gobert news. I asked him if there was any chance the tournament would be moved from New Orleans, which was considered one of the coronavirus hotspots at the time. He told me it would be impossible. The Smoothie King Center was likely already set up for the tournament and the four remaining teams had their travel booked. We were both hopeful the games could still be played without fans.

Greg Luca of the San Antonio Express News finished his game story before me and came over to shake my hand before he left the building.

“That’s probably the last time I’ll do that for a while,” he said.

I posted my story at 11:43 p.m. and went home anticipating some big news to break the next day.

Conference basketball tournaments announced all morning they were either shutting down completely or restricting their attendance to essential personnel and family members — the Sun Belt fell into the latter category. Decisions were constantly being made and changed while I was at another spring football practice media availability. Spavital was asked if he’d heard what kind of impact COVID-19 could have on the rest of spring training.

“For me, I plan for the worst,” he said. “So you know, I'm waiting to listen for the higher-ups to make the true decision, but I have alerted the team to the possibility of it (being canceled).”

The press conference wrapped up at 10:52 a.m. Forty-four minutes later, the Sun Belt canceled both of its basketball tournaments and other dominos began to fall. I reported that Texas State athletic department officials were meeting at 3:30 p.m. to discuss the school’s plans for the remainder of the semester. At 4:30 p.m., the Sun Belt suspended all sports indefinitely. At 6:08 p.m., the school released a statement from Kaspar expressing his understanding of why the tournaments were canceled and his disappointment that his team’s season had come to an abrupt end.

It still hadn’t sunken in for me that the sports world was collapsing, and it’s partially because I still had high school games to cover. San Marcos CISD Superintendent Michael Cordona announced that the school’s remaining competitions would still be played with only essential staff and family members of the participants allowed in the crowd. He emphasized that limiting the crowd was a precautionary measure and that no one in the district had tested positive for the virus. I asked SMCISD Executive Director of Communications Andrew Fernandez if I was considered essential staff.

“We will have a test ready for you at the gate,” he replied in a text. “Just kidding… yes you are.”

I went to the Rattlers baseball game a little after 6 p.m. It was one of the very few games still going on in central Texas.

“Soak it up tonight, Drew. For all of us,” my friend Ross Burkhart tweeted at me with a GIF of Jason Bateman’s character from “Arrested Development” failing to kick a tumbleweed.

San Marcos beat Hendrickson in six innings, 6-3. Head coach Bryan Webb told me Friday’s games were still set to be played but that Saturday’s games were not. I knew that March 13, 2020, was going to be my last chance to cover actual sports for a long time.

I woke up Friday with a mix of emotions. I was anxious over how the pandemic was going to affect my job moving forward. I was disheartened that I was only guaranteed to be a sports reporter for one more day. But I also knew to be grateful. My hometown paper, the Tyler Morning Telegraph, ran a blank sports page in their Sunday edition. The staff there had no games to cover. I still had three.

The UIL announced at 3:10 p.m. it was suspended all spring sports from March 16-29. I arrived at San Marcos High School at 5 p.m. and stayed for over three and a half hours to watch the softball, baseball and girls’ soccer teams. Each suffered a loss in their respective contests but all three coaches were glad to have gotten one last game in with their players. They seemed optimistic things would get back to normal after a few weeks. I was, too.

It wasn’t meant to be, though. The Sun Belt canceled all its spring sports the next Tuesday. The UIL did the same. Our newsroom was sent home to work remotely later in the week. Before leaving, my managing editor, Nick Castillo, and I discussed potentially shutting down the Daily Record sports section. He told me we could use the space to run more news stories — there were no shortage of those in a pandemic — and that I could switch over to the school board beat temporarily. I told him I wanted to keep writing about sports for as long as I could but figured we would have to make the switch at some point.

But somehow, we never did. The thing about COVID-19 is that it’s affected everybody, even people in sports, and I kept finding stories to write about. It was a barren wasteland at times and there were days I didn’t know what I was going to run until about an hour before our deadline. Moe Johnson’s weekly “Running with Moe” fitness columns were an oasis for me every Sunday.

I reported on every coaching change, every player going pro, every academic award handed out and every pandemic policy that was put into place. Then, on Aug. 6, Texas State deemed it safe enough for media to attend football practice in person. Things have felt a little more normal every day since.

Now a full year later, sports are back in full swing, meaning I have six consecutive days of games cover. That’s a blessing.