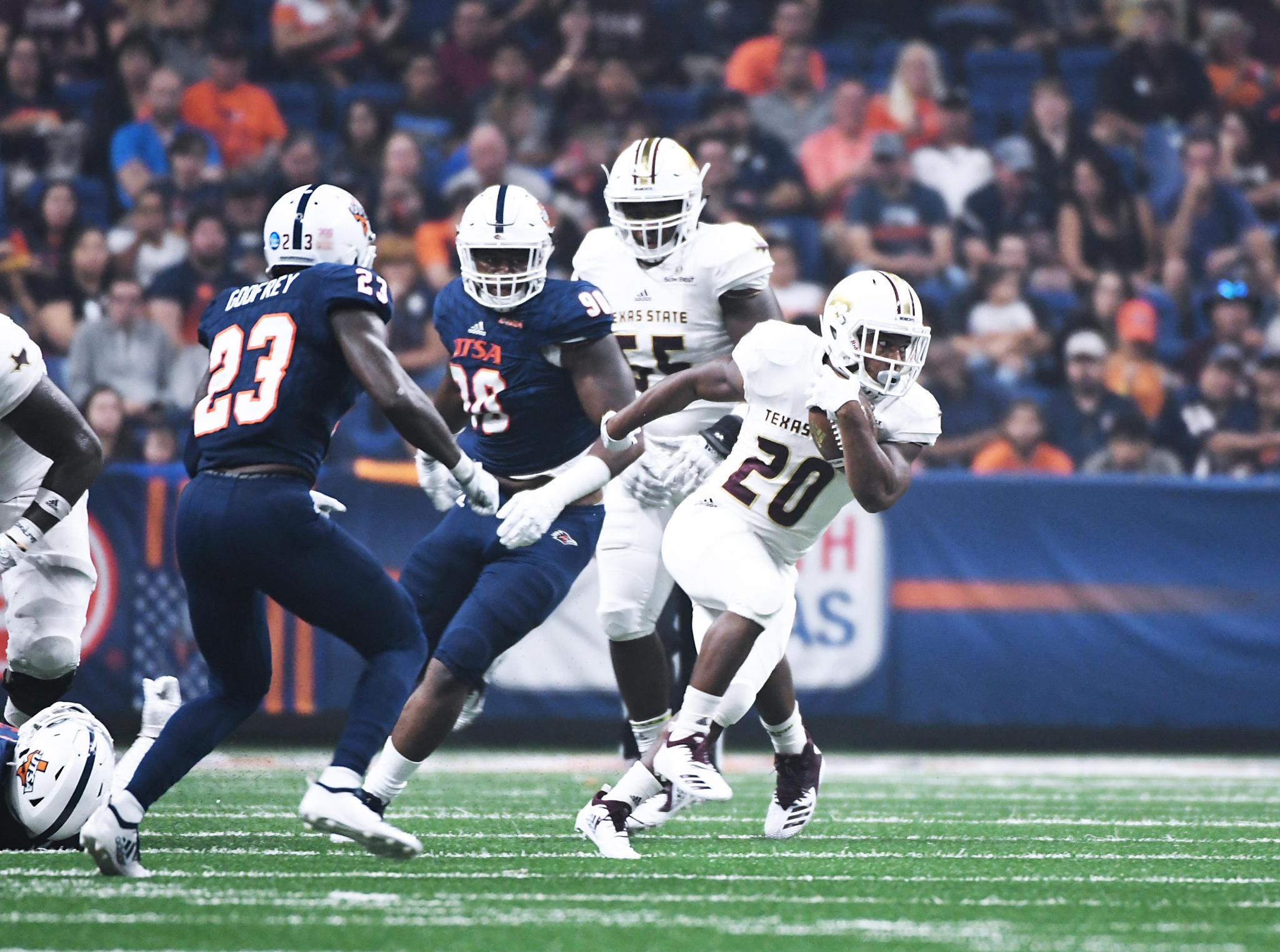 Texas State (1-3, 0-1 Sun Belt) enters its contest against Louisiana (1-3, 0-1) with a strong run defense, but a struggling run game. Meanwhile, the Ragin’ Cajuns possess one of the Sun Belt’s top rushing offenses, but a weak run defense.

The Bobcats running game is ranked the second worst in the conference. Texas State averages 139.8 yards per game. Its leading rusher is sophomore quarterback Willie Jones III, who missed most of the Bobcats’ last game against UTSA. In that contest against the Roadrunners, the Bobcats were held to 26 yards on the ground on 25 carries.

Head coach Everett Withers says the Bobcats need to improve their rushing attack  as the they enter the final eight-game stretch of the season.

The Bobcats have a chance to see an improvement as they go against Louisiana’s running defense, which ranks last in the Sun Belt and No. 126 in the country as it gives up 246.3 yards per game.

But Texas State faces a tough challenge this week stopping the Ragin’ Cajuns own potent rushing game led by sophomore running back Trey Ragas. Louisiana has the 38th best run game in the country, while Ragas ranks No. 37 in the country in rushing yards this season with 405 yards.

Texas State’s rushing defense is the second best in the conference and has only allowed 128.8 yards on the ground per game. Although the Bobcats have done well stopping the run, Withers isn’t satisfied.

“I think we’re doing some things, and again, we’ve got some older guys up front and in the front seven so we ought to be able to master what we’re doing defensively,” Withers said. “We’ve got to tackle better in space. We’ve got to leverage the football. We’ll have a big challenge this week. We’ll see where we are in run defense this week with probably the best (running) back (Trey Ragas) in our league so far. So, we’ll have a chance to gauge ourselves ... So, we’ll find out where we are defensively after this ballgame.”

Texas State will have a chance to prove itself Saturday in its first home game since Sept. 8. A win over Louisiana would mark Wither’s first conference victory at Bobcat Stadium. But the Bobcats know it’ll be a challenge.

“(Louisiana is) a very talented team,” Withers said. “I got to watch the TV copy of the game against Alabama. It’s really hard to judge anybody against Alabama. But I felt like in the second half they did well. I think, Ragas is a very talented running back, a hard runner. We thought he was last year. I think he’s even better this year. It’s going to take all hands on deck to do a good job building a wall on him as far as stopping the run.

“I really feel like defensively they remind me of South Alabama in a lot of ways. They’re maybe a little bit bigger and longer, a little bit more athletic. They’ve got some talented guys up front. So, we’ve got our hands cut out for us as far offensive line blocking. But I feel like we’ve gotten better in the offensive line doing that each week. We’ve got to continue to get better. Really talented wide receivers. Big, long wide receivers that they throw the ball up to a lot just for jump balls. The run game and try to get explosive plays on the outside part of the field, we’ve got to do a good job defensively.”

The Bobcats take on the Ragin’ Cajuns on Saturday at 6 p.m. inside Bobcat Stadium.