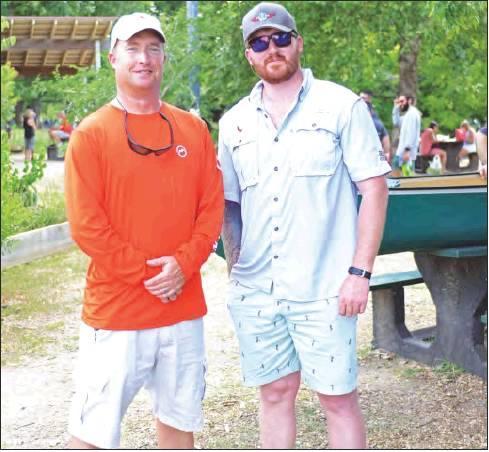 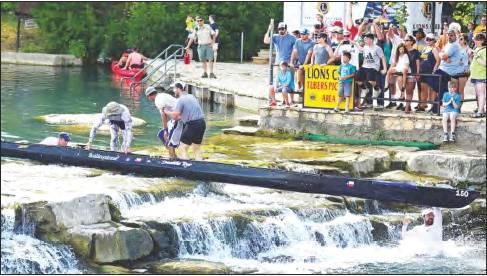 You know, the one where Vince Vaughn’s character Peter La Fleur leads an unathletic ragtag team — Average Joe’s — to victory at the Las Vegas International Dodgeball Open against their rival White Goodman (Ben Stiller) and the Globo Gym Purple Cobras.

Well that’s how Ruston Lewellen described his and Joshua Sneed’s run in this year’s Texas Water Safari. The only difference is unlike Average Joe’s, Lewellen doesn’t expect to win. But finishing would come as satisfaction to the duo racing as “The Longbottoms” in canoe 454.

“We’re not going to win but we’re going to try real hard,” Lewellen said. “That’s pretty much all you need to know about us. We’re really good triers.”

This is Lewellen and Sneed’s first Texas Water Safari. Lewellen, an account manager at Consolidated Containment — an oil company in Odessa, found the race and decided to drag Sneed, a state trooper, along with him.

“We’re both big hunters and outdoorsmen,” Lewellen said. “We’ve talked about going fishing and canoeing and stuff like that and I actually found the race online and I called (Sneed) and I said, ‘Man, why don’t you get a few days off work and see if we can finish this thing?’ He kind of laughed and didn’t think I was serious then I paid his entry fee. So, here we are with a canoe and we’re just going to see if we can make it.”

Sneed lost 14 pounds preparing for the race. Lewellen’s training, however, has been a little different than his teammate’s.

“I ate one less burrito this week than I would normally would,” Lewellen said. “We pretty much just found a canoe and we’re like, ‘Should we go train?’ And (Sneed) said, well it floats and that was about it.”

Both competitors want to finish the grueling 260-mile race from San Marcos to Seadrift. But they admit they’re underestimating “the world’s toughest canoe race.”

“I think we’ll finish,” Lewellen said. “I think we’re kind of underestimating it, definitely. A lot of these guys have obviously been doing it for 20, 30 years. We’re going to give it a shot with our aluminum canoe. But we’re excited about it. I think we’ll finish but I’m trying to stay optimistic. I’ll probably hate my life in 40 hours. We’ll see.”

Finishing the race would mean a lot to both competitors. They both said it’ll prove they’re in better shape than they think.

“It would mean I’m not as out of shape as I thought I was,” Lewellen said. “A lot of times I get really sad when I brush my teeth with my shirt off so this is really going to make me feel good about myself.”

Editor’s Note: Lewellen and Sneed began the race on Saturday, but made a wrong turn on the course. After the error, The Longbottoms failed to reach the checkpoint at Staples in time and were eliminated.