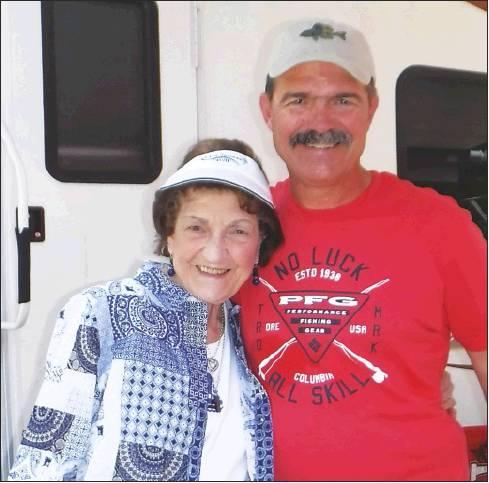 On a fishing trip and an annual Mother's Day picnic

My fishing friend, Mike Schlimgen, grew up in Arkansas, near Hot Springs. Every May he makes a pilgrimage back to Arkansas for scenic fishing floats down the Ouachita River, fishing in his brothers, Terry and Greg’s, bass boats on Lake Ouachita and camping on the shore of the beautiful lake. But the center event of the trip is a Mother’s Day picnic fish fry.

Mike’s mother is 89 years old and has been an enthusiastic participant (really the star person) in this outdoor tradition for many decades. Dad, a dedicated family man, has now passed but to make sure that the family continued to enjoy the lakeside picnics and remember the “good times” he left an important memorial. It is a table centerpiece made from Mike’s mother’s old cupboard doors. The door still shows the scorch marks from the oven below. The centerpiece is covered with pictures of camping trips from decades past, with an American flag in the middle. This special centerpiece is the first item placed on the picnic table. That’s family tradition at its best.

The picnic always is the time for telling family stories from decades past and catching up with info on kids and grandkids. Also, with all elderly gatherings, ailments are discussed with various remedies recommended,

Mike is a fish-aholic, so he went early this year to float the Ouachita River in his kayak with fly rod in hand. The Ouachita is a mountain stream with clear, cool water that is full of smallmouth bass. The river flows through the Ouachita National Forest, with many public access points provided by the U.S. Forest Service.

Mike launched his kayak at River View Cabins and Canoes in Oden, Ark. This family-owned business also provides a shuttle to pick up fishermen after a day on the river.

“My 3wt fly rod was bent time and again, with aggressive and hard fighting smallmouth bass. Not being too selective, a five pound blue catfish also gulped down my streamer, and took me for a kayak ride on the river,” Schlimgen said.

“A friend tied a yellow popper, topwater fly for me, and it was greeted with equal enthusiasm by these bronze backed beauties. 'Kentucky' spotted bass also call this place home, and they repeatedly smashed the popper with attitude,” he said.

In characteristic Schlimgen style, Mike said, “Miles of paddling, and over 50 fish in the boat, left me worn out and happy.”

Not only did Mike come early for the family event to float the river but he stayed a day after to do it again.

For several days during the family camping adventure Mike, Terry and Gregg fish from bass boats on the open water of Lake Ouachita. This beautiful lake is 30 miles long and 10 miles wide. It sports hundreds of creeks, covers and long rocky points. The lake is full of smallmouth bass, walleyes, catfish, sun fish and huge striped bass. Mike and his brothers have landed some of these monster stripers up to 40 pounds.

“We always joke about the pressure on for us to catch fish for the Mother’s Day fish fry,” said Mike.

With a lake so full of fish that’s not ever a problem.

Like all family reunions, it came to an end as the sun dropped low in the western sky.

“We kissed, hugged and said 'Goodbye' a half dozen times before anyone actually got in the car to leave,”Schlimgen said.

A family lakeside gathering, combined with an annual fishing trip, is always a winning tradition for the big Schlimgen family.