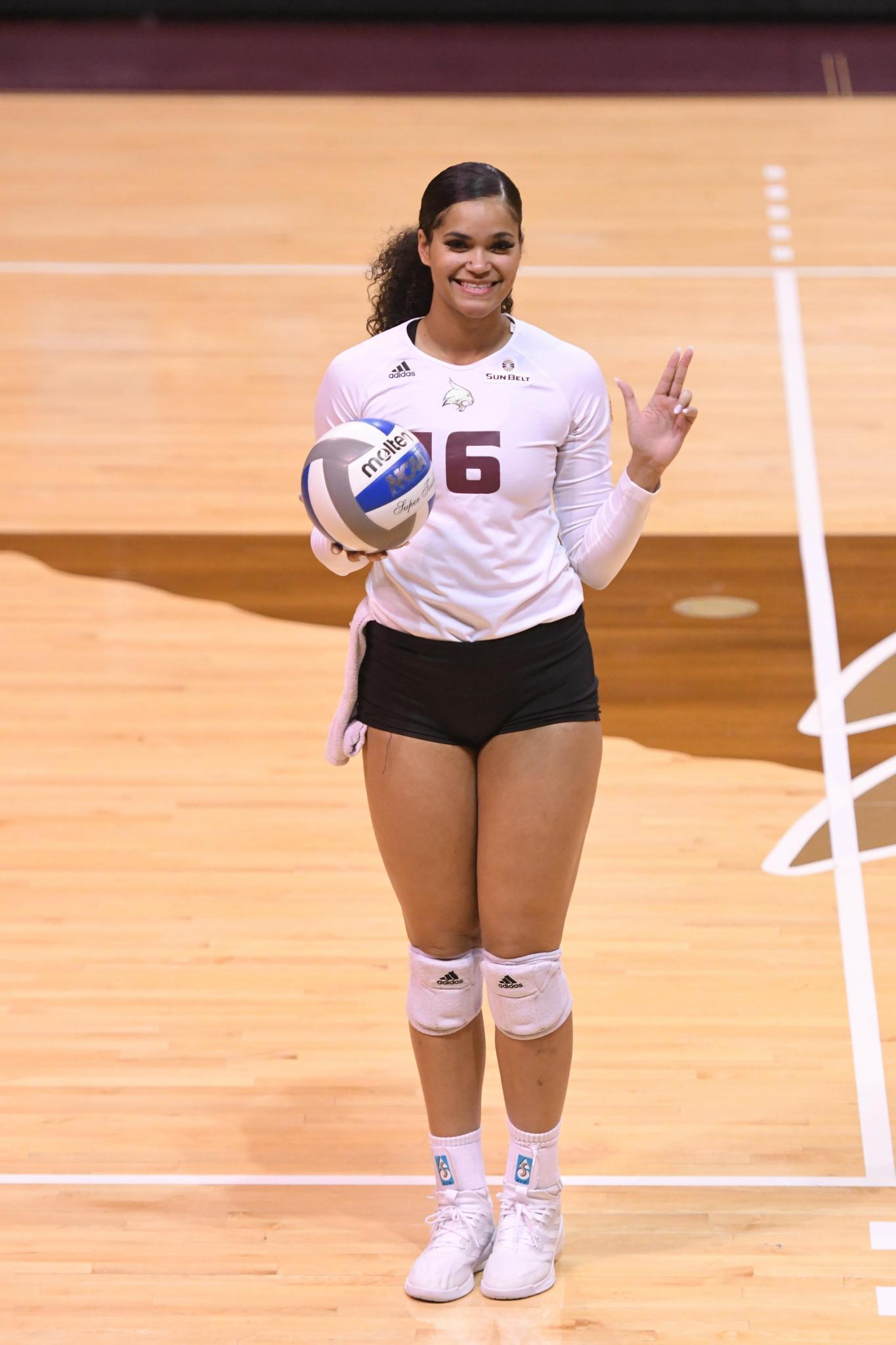 Some of her Texas State Volleyball teammates had been creating content on the app during Fitzgerald’s first two seasons with the Bobcats. The outside hitter finally decided to join in, posting her first video on Dec. 10, 2019.

Her followers gradually started piling up. By the time Texas State’s athletes were sent home in March 2020 to quarantine during the COVID-19 pandemic, Fitzgerald had made 10 TikToks and estimates she had an audience of over 40,000. The Mansfield native kept posting, finding time to film 30-second dance loops at her house in April and June, and between practices when she returned to campus in July. Recording became a pregame superstition for her during the 2020-21 season.

She remembers being stuck at around 60,000 followers for the longest time. But in recent weeks, Fitzgerald’s account blew up. A video of her dancing to “Better Than Me” by Q Money, which she filmed on the floor of Strahan Arena after hitting the weight room on June 24, went viral, gaining 1.4 million plays. It was the first of her TikToks to cross the one-million threshold.

Texas Senate Bill 1385 is now in effect, allowing college athletes to receive compensation for using their name, image and likeness (NIL). Kelsey Solis, Texas State’s Associate Athletics Director for Compliance, said the rule change has been discussed for over two years. The expectation last summer was that either the NCAA or the federal government would create a uniform law that granted college athletes the same NIL rights nationwide.

But on Jan. 11, the NCAA Division I Council indefinitely delayed a vote on the proposed rule changes. And while seven bills regarding NIL compensation have been introduced in Congress, none have ever been brought up for a vote.

“At that point, the Texas legislators started working on something, you know, at the prompting of athletic directors,” Solis said. “Because we needed something to be on equal playing ground with the states who were going to have legislation.”

Texas Sen. Brandon Creighton filed SB 1385 on March 10. It was referred to the Senate’s Committee on Higher Education, whose nine members unanimously voted in favor of it on April 19. One of those members was Sen. Judith Zaffirini, who represents District 21 — an area that encompasses San Marcos and Texas State.

“The opportunity for student-athletes to profit from their name, image and likeness not only allows them to be compensated fairly for their successes, but also ensures Texas universities remain competitive with those in the 16 states that have authorized these benefits,” Zaffirini said in an email sent to the Daily Record.

“The widespread support Senate Bill 1385 garnered in the Texas Legislature last session, coupled with (June 21’s) U.S. Supreme Court ruling allowing schools to provide student-athletes with more education-related benefits, are testaments to the value of student-athletes' contributions to our universities and to our communities.”

The bill was passed in the Senate by a 28-2 vote and sent to the House, where it was again referred to the Higher Education committee. Fitzgerald was invited to testify on the bill during the committee’s public hearing.

By that time, Fitzgerald had received endorsement offers from multiple companies as her TikTok account sat at 67,000 followers. Her first came from a local dentist’s office, who offered her a free cleaning and teeth whitening in exchange for a TikTok that promoted their business. Another came from CROSSNET, a game company that combines volleyball and four square, who proposed compensating Fitzgerald for a video of her using their equipment.

She had to decline all of them.

“As a Division I student-athlete, I do not have the time to have a job to support myself financially, as other students are able to, between the demands of athletics and academics,” Fitzgerald told the committee on May 6. “Additional income from these opportunities would help me pay for some of the expenses that our athletic scholarship does not cover. With this bill, I would be able to generate some additional income with little time commitment as most of my content is able to fit within what personal time I do have.

“Unfortunately, as a student-athlete who has a large social media following, I’ve had to turn down multiple offers that could have helped me financially and would have benefited my personal brand through networking leading into post-graduation … Brands are always looking for the next big thing, but once I graduate, my opportunities may fade if I don’t take advantage of them now. That is why expediting the passing of this bill is important and will benefit so many.”

The bill proceeded out of committee and passed in the House with a 117-27 vote. It was sent back to the Senate, which concurred with the House’s amendments in a 28-2 vote. Gov. Greg Abbott signed the SB 1385 into law on June 14.

Solis and Texas State’s compliance staff began training the Bobcats’ athletes on how they could capitalize on the new rules immediately after. They held in-person sessions for the teams currently on campus — football, volleyball and men’s and women’s basketball — and held two virtual sessions for those away from school.

The sessions were also used to adjust the athletes’ expectations. Solis said many of them had heard about what was happening in the media, but some didn’t know the details or hadn’t heard about it at all.

“I think the thought process for a student-athlete who isn’t educated is thinking ‘Oh, I’m about to make big bucks.’ And you really aren’t,” said Texas State head women’s basketball coach Zenarae Antoine, who serves on both the Sun Belt NIL Task Force and the NCAA Division I Women’s Basketball Competition Committee. “Say I’m Michael Dell. How much money am I going to invest into an 18- to 25-year-old? When I know already, as a college coach, how (athletes’) lives can fluctuate and change. As far as investing that type of money and resources into (them), the likelihood is very minimal for most student-athletes.”

There are also gray areas that still need to be addressed. A rule change of this magnitude typically comes with clear guidelines decided on by the NCAA, who schools can reach out to if they have questions. But with the NIL laws varying state-by-state and the NCAA unable to issue a uniform policy, it’s left most schools to figure it out on their own with their legal counsels.

Solis said administrative staffs from Division I schools across Texas have been in contact with each other to try to stay on the same page when it comes to interpreting the law.

“The NCAA policies that came out are sort of laughable,” Solis said. “They basically just said, ‘Hey, you're not going to get in trouble with the NCAA if you follow your state rules right.’ So there's not a lot, really, to that.”

For instance, college athletes in Texas are not allowed to use any mark or logo trademarked by their institutions for NIL purposes. But can they use an image of themselves owned by the school?

Or what if a Bobcat athlete has an endorsement offer from Nike, which conflicts with Texas State’s school-wide partnership with Adidas? Solis said decisions on those types of scenarios are still being made.

“(Executive Senior Associate Athletics Director for External Operations Don) Coryell is on our working group and he has definitely taken the stance of, ‘We don't want to be stricter than we have to be. So let's have legal tell us where the line is,’” Solis said. “We don't feel like it's going to be a disadvantage to our current contracts for our student-athletes to explore those possibilities, either.”

Many Texas State athletes have already cashed in on their NIL rights since July 1. Fitzgerald was the first, finally signing a deal with CROSSNET. She said the company’s original offer was for just one video. But when she went back to them to see if they were still interested in endorsing her, they gave her a three-month contract.

Jill Slaughter, Fitzgerald’s teammate and a middle blocker for the Bobcats, who has 386,800 followers on TikTok, got endorsed by Barstool Sports. Texas State Football wide receiver Kevin Howard became a talent on Cameo, currently charging $10 for personalized video greetings. Tanner Prewitt, a quarterback on the football team, announced he’s hosting his own football camp in his hometown of Dripping Springs on July 31 that will feature fellow quarterbacks Brady McBride and Tyler Vitt, and wide receiver Chandler Speights, with a $60 sign-up fee.

More deals are bound to come. Texas State’s compliance office will oversee all of them. Solis wants to make it clear, though, that she’s not an agent. The college athletes have to go find and negotiate with businesses themselves.

“I've just been telling the student-athletes, this is still work. So you actually have to do the work, work performed. This isn't an open door for folks just to hand you money as you walk by,” Solis said. “And so, I think our student-athletes understand that. They're excited, they're so excited.”