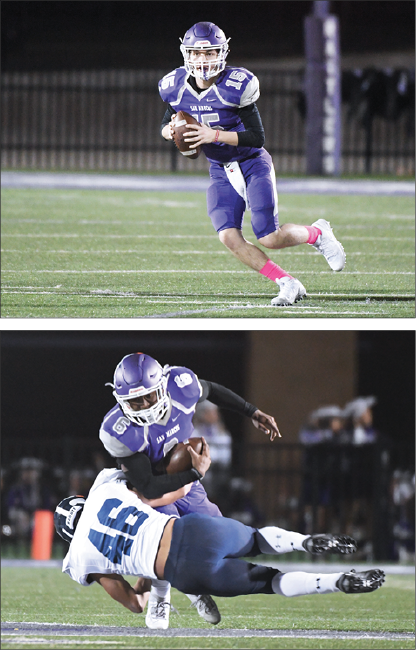 Anytime we take on a challenge whether it be in sports, school or even personal goals you set out for yourself, there will come a day when we have reached the end of our goal and look to start a new one. For seniors Alex Garcia and Takai Madgett, the end of the road as Rattler football players will be Friday night. The two players have mixed emotions going into their last week of practice and with one more chance to play in purple in white.

“It’s kinda bittersweet because it’s our last week playing high school football but I’m kinda excited because we get another week to play football,” Garcia said.

The journey started as a five-year-old who cried taking his first hit in youth football to becoming the starting quarterback for the city’s high school. Alex Garcia has played the last 16 games for San Marcos in hopes of leaving his mark on the school and the community before reaching this moment in his career. He’s done well making a name for himself around the city, having some key performances that won’t be forgotten anytime soon including the 50-49 win over Laredo United. Garcia threw for four touchdowns and 368 yards, extending plays with his legs and collecting 60 yards on the ground. The Rattlers trailed 35-7 at one point during the wild game but rallied behind their quarterback in order to get the comeback victory.

Garcia tries to emulate former college and NFL quarterback Tim Tebow — who he shares a No. 15 jersey with — when he scrambles out of the pocket to make a throw or hits his receivers on a quick slant route over the middle of the field. He works relentlessly in his off time, regardless of the success that comes with it. Instead of working with trainers, the starter prefers to do the work by himself in the offseason and it shows in his stat line.

The senior quarterback couldn’t do it without his skilled receiver in Takai Madgett. The connection between the two has placed both of them in the top 5 in their respective yardage categories this season.

“(The connection is a) pretty good one,” Madgett said. “Whenever he’s gonna throw it I know it’s gonna be pretty good to where it’s going to be, so I just have to run my route right.”

Madgett made sure to leave his mark this season with three consecutive games with 100-plus receiving yards and a career-high 17 receptions in his final game inside San Marcos Toyota Rattler Stadium. The senior ranks second in the district with 779 receiving yards on the season plus seven touchdowns added to his resume. He continues to be the go-to receiver, picking up huge chunks of yardage when the team needs it. His 14.85 yards per catch over his career as a Rattler places him in the record books. Garcia’s grown to target him often, especially on third downs.

“I can trust him, whatever play it is I know he’s gonna run the right route and I don’t have to throw to a specific spot,” Garcia said with a big smile. “He has good hands so I can just throw him the ball anywhere and hell catch it.”

For Alex’s father, Joey Garcia, it’s been a great ride watching his son battle trials and tribulations throughout his high school career. Joey depicts how his son gets through everything even in some of the darkest times, one of them being the passing of Alex’s mother and how he continues to see his son persevere every day.

“I would say I’m speechless of words but I’ve always been there and I always back him up no matter what, Joey said. “He’s gone through a lot, his mom passing away and all that he’s managed to overcome that situation and carry on knowing that he has too.

“Him and his teammates did the best that they could and he represented the city of San Marcos the best way that he could,” Joey said. “I’m beyond proud of him, man, I don’t know what else to say but besides being proud. I’m proud of him wearing that No. 15 and competing every day as it says on the back of that jersey. He’s done a great job.”

Alex Garcia and Takai Madgett will play in their final game as Rattlers this Friday at 7:30 p.m. on the road against New Braunfels Canyon. Their marks on the school and in football will be the end of a new journey and the start of a new. How do they want to finish the year?

“Getting the win,” both said.