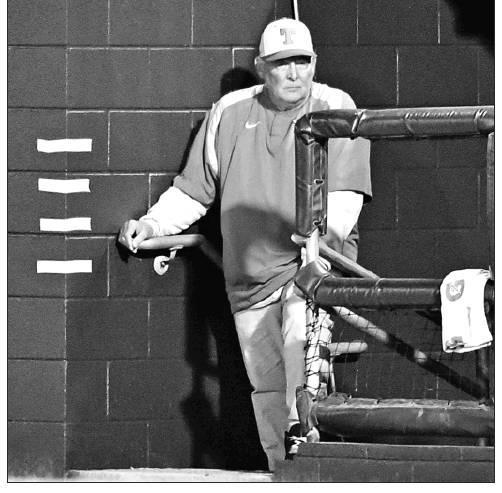 Former Texas head coach Augie Garrido stands in the dugout during a game against Texas State during his career with the Longhorns.
Daily Record Photo by Gerald Castillo

Garrido gone but still a presence at resurgent Texas

AUSTIN (AP) — At Texas, the aura of Augie Garrido is everywhere.

From late-inning pleas to the heavens to his jersey hanging in the dugout and the “Augie” sign on the fence in left field, players and fans have made sure that the national championship-winning coach may be gone but he is far from forgotten.

Garrido spent nearly 40 seasons in college baseball, his final 20 with the Longhorns. He died in March after suffering a stroke at age 79, leaving a legacy of five national championships and 1,975 career victories.

Three months after he died, the two programs Garrido led to national championships, Texas and Cal State Fullerton, are both hosting super regionals this weekend with a chance to return to the College World Series. Texas will be a home against Tennessee Tech and Fullerton faces Washington.

Texas pushed Garrido into retirement in 2016 after the school’s first losing season since 1998 and missing the postseason for the third time in five years. But Garrido stayed close to the program under new coach David Pierce.

“Coach still texted me after every outing. He was in constant contact,” said Sawyer, who played three seasons under Garrido. “He was a big person and a father figure for all the guys.”

The Longhorns wear a patch with “AG16” — Garrido’s jersey number — on their hats. Their batting helmets have a “16” sticker. The Longhorn logo in centerfield also has “AG16.” Garrido’s jersey hangs in the Texas dugout every game, whether at home or away.

Garrido’s personality was California cool with a Zen-master approach. He connected with his players in long talks that were as much about thinking about how to win as how to swing a bat. The Texas dugout now has a plaque with one of Garrido’s favorite quotes: “The world treats winners a lot different than it treats losers.”

It could just as easily been something else: “Omaha,” Garrido once said, “is mandatory.” Garrido knew that was the expectation at Texas. He took his Longhorns teams to the College World Series eight times, the last in 2014.

Pierce stepped into the unenviable job of replacing an icon of the game. He’s handled it well. In Pierce’s first season, Texas made the NCAA Tournament. In his second, the Longhorns won the Big 12 Conference regular-season title behind a staff that kept improving and the powerful bat of second baseman Kody Clemens. The son of former Texas and Major League Baseball star Roger Clemens hit 21 home runs with 68 RBIs and was drafted this week by the Detroit Tigers in the third round.

Kody Clemens knows the pressure to win at Texas firsthand. His dad won a national championship at Texas in 1983. His brother Kacy was a freshman on Garrido’s 2014 College World Series team. Kody Clemens is a finalist for the Golden Spikes Award given to the nation’s top player.

“My dad is super excited. He gets to relive his memories here,” Kody Clemens said.

After an 0-2 hiccup in the Big 12 Tournament, the Longhorns hosted an NCAA regional and won it without a loss. When Tennessee Tech upset Mississippi in the Oxford regional, Texas was a surprise host for this weekend’s super regional.

When Indiana loaded the bases the bottom of the ninth Sunday, Pierce turned to regular starter Chase Shugart for the final two outs. He also muttered a quiet plea: “Help us out Augie, ‘cuz we know you’re here.”

Shugart struck out two to seal the win.

Pierce has embraced the aura of Augie throughout his program all season.