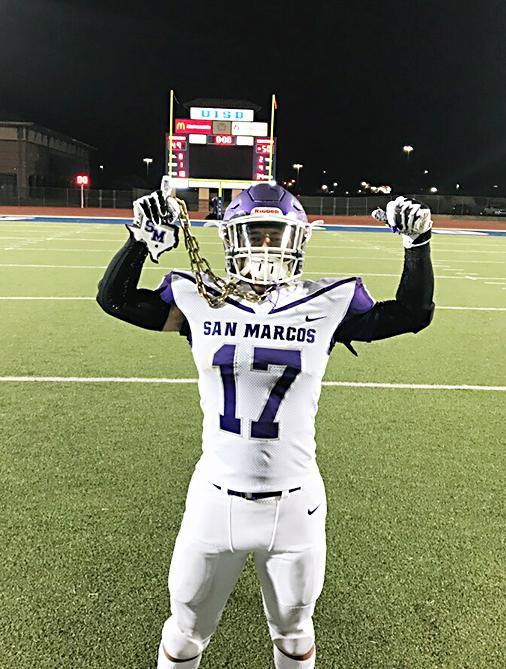 Javier Gonzales sauntered out of Laredo United’s visitor locker room, hands on hips, smile a mile wide. He was out of breath, dripping with sweat, his hair matted down by his helmet.

He should have been exhausted. San Marcos just completed a hard-fought 28-point comeback over the Longhorns to earn its first win of the season, 50-49.

But the senior cornerback couldn’t stand still. He was rocking the Rattlers highly-coveted golden necklace with San Marcos’ “SM” logo plastered on a charm in the shape of Texas that hangs in the front.

How did it feel to get that chain?

“Man,” Gonzales said. “I’ve been trying to get this since last year.”

The chain, like the one found at the University of Miami, is reserved for players who create turnovers. It serves as an incentive for the team’s defensive players to make big plays, à la Ohio State’s helmet stickers.

Gonzales had arguably just come off the best game of his career when the turnover chain was introduced. He had racked up three solo tackles and snagged his second interception of the season, which he returned for eight yards, in a 39-35 win over Manor on Oct. 27, 2017.

“And ever since then, I’ve been like ‘Bro, I’m going to get this chain.’” Gonzales said.

Six games later, though, the chain still hadn’t appeared on his neck. The opportunities weren’t there often enough, and the few that he did have literally slipped through his fingers.

“I’d say one of his best skills is understanding where he needs to be at,” co-defensive coordinator and defensive backs coach T.P. Miller said. “Because sometimes, you’re not put in a position to make the interception. Sometimes, you’re put in a situation where you have to play the hands depending on ball placement.”

Junior quarterback Alex Garcia had just thrown the game-winning touchdown to junior wide receiver/running back Takai Madgett, putting San Marcos back in front, 50-49. The Longhorns got the ball back on their own 30-yard line with no timeouts and 54 seconds remaining in the game.

Miller and the other defensive coaches had prepared their players for this type of scenario. They run the two-minute drill in practice every week. He tells his defensive backs to play “top to bottom.”

“If you have an immediate route in front of you, most likely (the pass) is going to the route behind you,” Miller said.

On first down, United junior quarterback Wayo Huerta completed an eight-yard pass to senior receiver Jorge Murillo. The Longhorns hustled back to the line of scrimmage to run their next play.

San Marcos called a zone defense. Gonzales lined up on the strong side across from the outside receiver, senior Julian Alvarado, responsible for any underneath throws.

United snapped the ball on 2nd and 2 from the 38. Huerta rolled out of the pocket to his right. Alvarado ran a 12-yard out route to the 50-yard line. The cornerback stayed attached to him the whole way.

“(He) took himself out of the play, initially, running out of bounds,” Gonzales said. “So, just knowing the sport and all the rules to it, I knew that he was ineligible. So, (I) started just drifting back. That’s what I’ve been taught.”

“I just happened to be looking on that side of the field and I saw (Gonzales) kind of hawking the ball,” head coach Mark Soto said. “He had his eyes on the (quarterback) the whole time.”

Huerta chucked the ball to sophomore receiver Robert Sanchez on a deep post. Gonzales jumped the route, came up with the pick and began sprinting across the field.

Gonzales finally slid, six seconds after the interception. The Rattlers kneeled on the next play, sealing the victory.

The senior and the turnover chain were united at last. He planned to wear it all the way home.

“But it got to a point where it was just too heavy,” Gonzales said. “It got strenuous on my neck, it got too heavy.”

Gonzales handed the chain back over as he hopped on the bus. He hopes it won’t be for the last time.