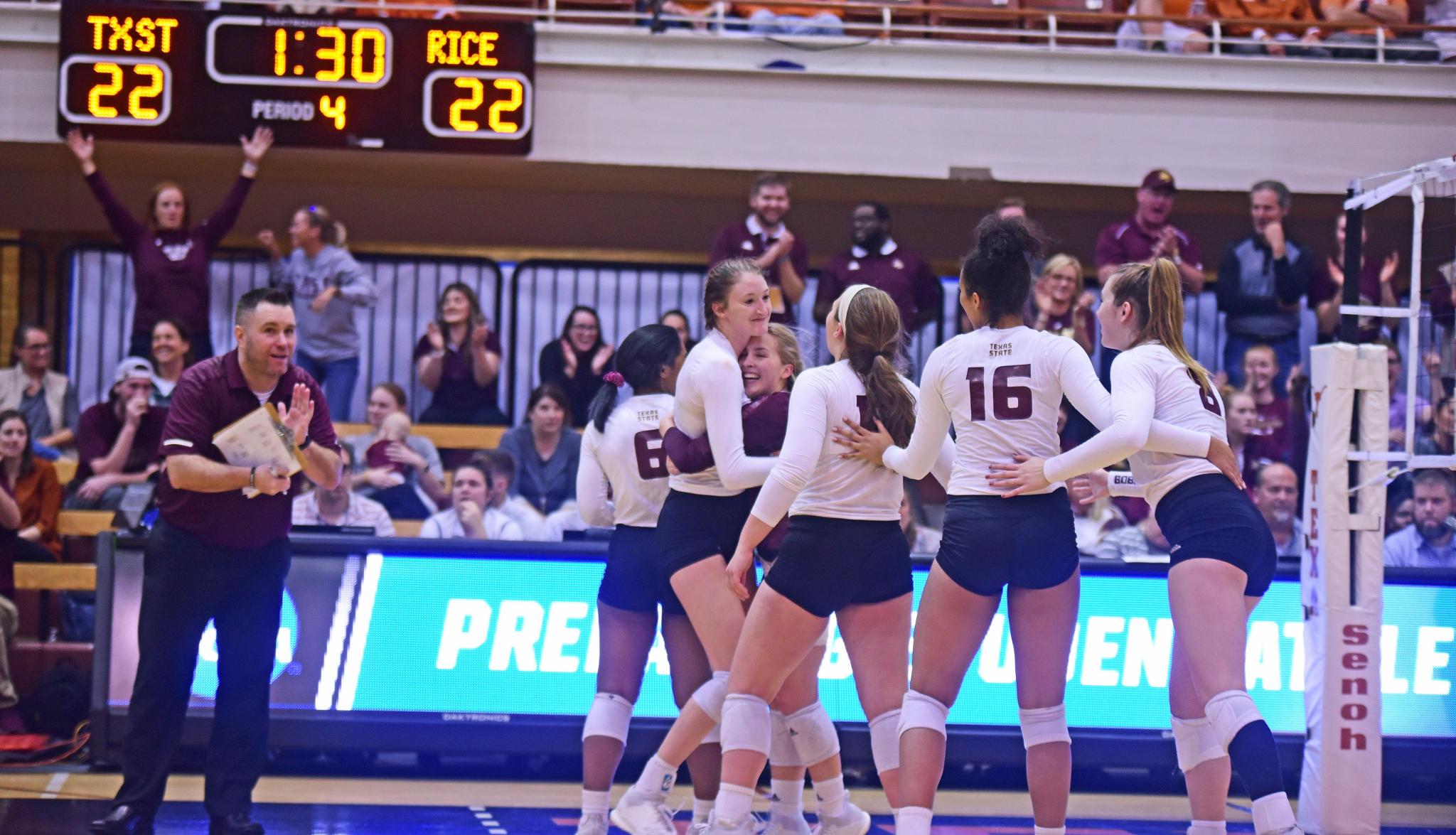 Sitting, waiting for Texas State’s turn on the postgame podium, Chisum found herself in unchartered territory. The 39-year head coach has always been a part of the first team at the postgame press conference — the losing team speaks first at the NCAA tournament.

“Needless to say that I’m excited for these gals, the maroon and gold and Bobcat nation is an understatement,” Chisum said. “They’ve worked hard. Needless to say, all year long … They’ve done a great job you guys. It’s been fun.

“(Thursday), we definitely weren’t at our very best. But what I told them, what I saw out of them was character. They showed a lot of character sticking together when we were down. We didn’t have the rhythm that we have a times but found a way to win it. So, hats off to these guys.”

“It means everything to me to be the team, the senior leader to make history, this is our first (NCAA tournament) win,” Daigle said. “So, I’m just so proud of us and how hard we’ve worked since the summertime. I don’t know, it’s a wonderful feeling.”

Junior outside hitter/setter Cheyenne Huskey and freshman setter Emily DeWalt echoed Daigle’s sentiment. For Huskey, who had spent her last two seasons at Florida and started for the Gators in their national championship appearance in 2017, said this win was more exciting that she could’ve imagined.

“It’s definitely a different feeling being that this is their first time winning and I contributed to that,” Huskey said. “But also, I’m ready to keep going.”

Huskey put together an outstanding performance against Rice. She amassed a career-high 23 kills. More importantly, she kept a team that had no NCAA tournament experience together when they needed guidance.

But Huskey was quick to give praise to her teammates for helping her.

“My setter (DeWalt) over here , give credit to her because obviously, you know, I wouldn’t be anywhere without her, also my passers too,” Huskey said. “Really, I couldn’t tell you. I just try to work around the block as much as I can. Coaches were working on shots definitely against Rice this week and they just tended to work out and continued.”

The opening set featured seven ties. The Bobcats held the advantage with a 15-12 lead. After Rice called timeout, the Owls went on a quick run to even the score at 15. Rice gained the lead at 17-16 and never gave it up. The Owls took the first set, 25-23.

But Texas State answered in the second set. The Bobcats held control of the game after going up 2-1. Although Rice kept it close, Texas State evened the match with a 25-22 second-set victory.

The third set was a tight affair but it ended in the same fashion for the Bobcats — a 25-22 win to take a 2-1 match advantage.

Rice looked poised to force a decisive fifth set with an 18-14 lead at hand. But a kill from senior outside hitter Amy Pflughaupt combined with back-to-back kills from Daigle had Texas State within 18-17. A Rice error evened the frame at 18-18.

The set remained close with neither team gaining a lead larger than a point until Pflughaupt tied the set at 25-25 with a kill. An Owl error gave Texas State match point at 26-25. After a long rally, Daigle ended the match with a kill to secure the Bobcats the 3-1 win.

“It was a dogfight,” Chisum said. “It was tough. I have a lot of respect for (Rice head coach) Genny (Volpe) and what she does at that program.”

As Chisum sat at podium with her first NCAA tournament win in hand, she said she could talk all night. But now she has to prepare to face No. 5 national seed Texas (21-4, 15-1 Big 12) on Friday at 8 p.m. in Gregory Gym.

She believes Texas State faces no pressure heading into Friday’s match against the Longhorns.