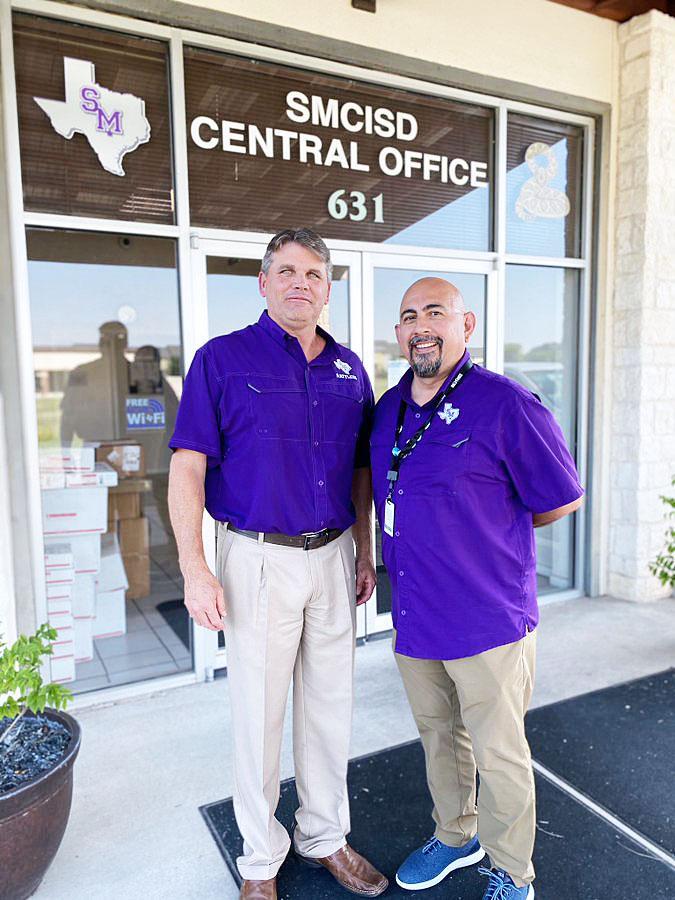 “Give me a shout around 6:30 (p.m.),” Walsh said in a text message to the Daily Record, attempting to set up a phone interview. “I think I’ll be free then … but I thought that two hours ago.”

After being approved by the school district’s board of trustees Monday night, Walsh began setting up shop on campus Tuesday, meeting the names and faces he’ll need to remember. Through a full day’s work, he estimated he’d only met 15% of the people he’s supposed to know.

He’s busy, but it’s a good busy. It’s the feeling you’re supposed to have when laying down a fresh foundation for an athletics program, especially one that reaches the same level success as Walsh had in 14 years at Denton Guyer.

The Daily Record interviewed Walsh on Tuesday to discuss his vision for the Rattlers:

Daily Record (DR): How did you end up coming to San Marcos?

John Walsh (JW): "My time was over in Denton and I'd resigned right before spring break or right at spring break. So we go on spring break and then I'd planned on looking for a one-horse town situation. And then the COVID virus hit and things looked pretty bleak. The school business shut down — the world shut down. You know, so I didn't know, really, what I was gonna do next. And then when the San Marcos job came open, it sure piqued my interest. I've been to the city several times and I always loved coming down here and didn't know anything about the school or athletics. So I just went to investigate and then started getting interested. And then once I put my name in the hat and started talking to (San Marcos CISD superintendent Michael) Cardona and (San Marcos principal Denisha) Presley and the leadership staff they've got here, it was easy to get more excited about it."

DR: What stood out to you about this job?

JW: "Probably, maybe three factors. One, I wanted to move somewhere my family wanted to live. I didn't want to move them to a place they'd never been to and this is a good area, so that was a plus. The one-high school town, two-middle school town, seven-elementary school town was appealing. Trying to make a city and a school district crazy about athletics, K through 16, was important to me. And then when I saw the facilities, that was it. This place is very functionable and if you get the right formula going, you've got a chance to do some things here."

DR: What is it about being a “one-horse town” that was important to you?

DR: You said that you're really eager to start building a winning culture here. What all goes into that for you and your system?

JW: "Well I think any system, really, if you're gonna take over a program like this, you know, you better start building trust. And you can't build trust until you start building relationships. And I think if anybody knows anything about the program I came from, we were a relationship-based program and I think the kids trusted us, the parents trusted us, we trusted them. And then that's the form of success. You know, how fast we get positive results here is gonna be how fast people start trusting."

DR: How do you build that trust?

JW: "Building relationships. We gotta have communication. And it's hard right now because we're having to do it on Zoom. But it is what it is, so you do a great job on Zoom, make sure you set your meetings up right. And I've already started meeting with coaches starting (Tuesday and Wednesday) and I will start player meetings next week. And that's how you do it, you just gotta get in front of them and give them the plan and then start showing the plan. But I'm ready for this country to open up so we can start a plan."

DR: What should fans be expecting in terms of style of play from your teams?

DR: What are some short-term and long-term goals that you have for the program?

JW: "The short term we already covered. The immediate, short-term goal right now is just meet everybody, start gaining trust, start building relationships. And before you even get to the X's and O's, we just gotta start meeting and building relationships. That's the short term goal. The long term goal, you know, I've been coaching for 26 years and — let me count here, 1-2-3 — all but three years, 23 of the 26 years, I've been in the playoffs. So the long-term goal would be to get back into playoff football."

DR: What are you most excited about for this upcoming year?

JW: "Just every everything we've talked about. It's hard to pinpoint one thing I'm excited about. I'm excited about, hopefully — you know, you're interviewing me right now and I'm sitting in the press box at Rattler Stadium. So what I'm excited about is trying to fill this place up and make it loud on a Friday night."