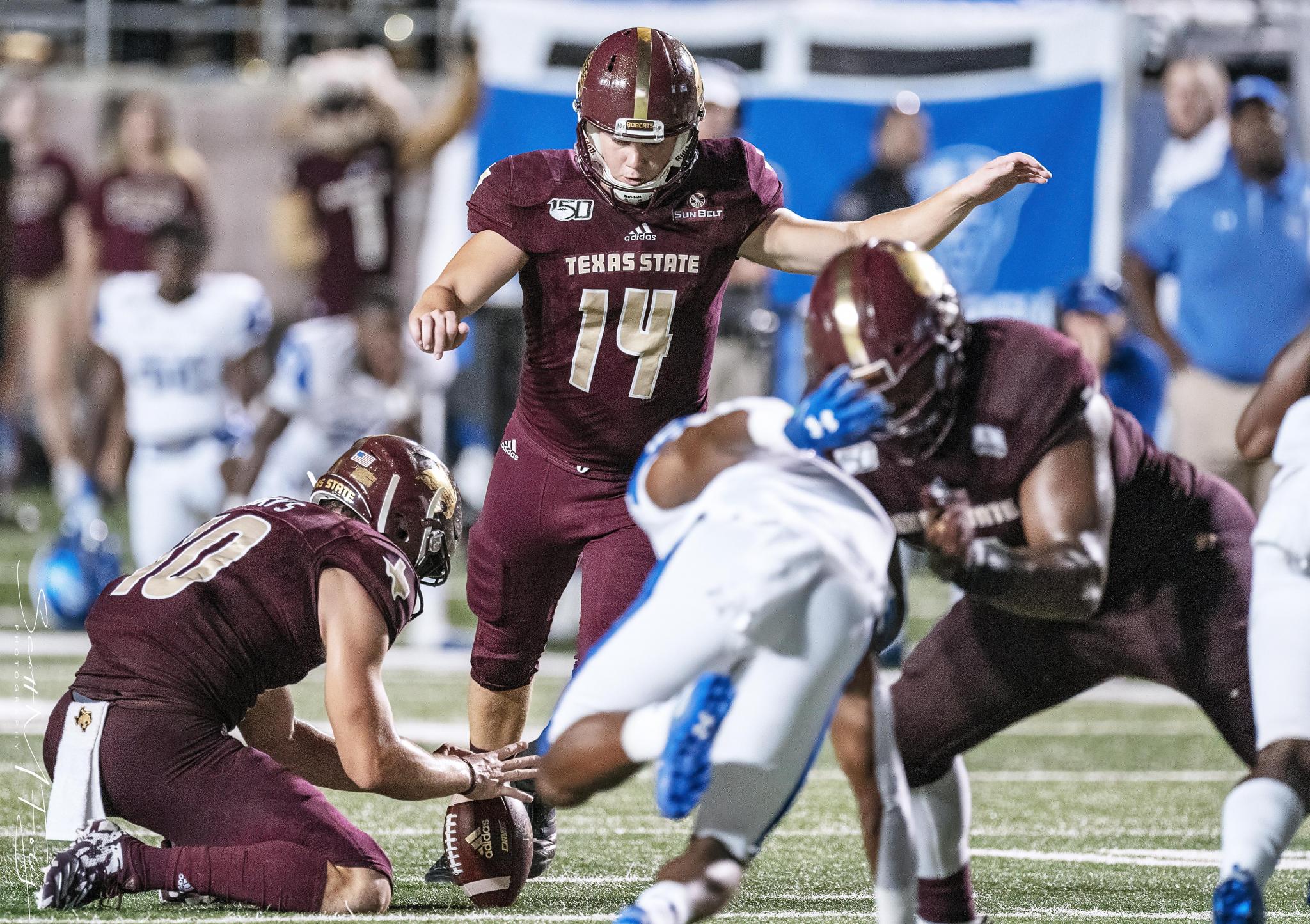 Joshua Rowland is always waiting on his next kick.

The Texas State senior was 2-2 during the maroon and gold’s game against Georgia State on Sept. 21, when Rowland stepped back on Jim Wacker Field in double overtime. Texas State had 4th and 11 at the 26-yard line, setting the kicker up to attempt a 43-yard field goal from the right hash mark. Rowland lined up, nodded his head, then swung through as the ball was snapped.

The kick curved too far left, no good.

“You just gotta move on from it,” Rowland said. “You know, we don’t get four downs or however many downs to try to make a kick. We just get a one-and-done shot.”

He joined the football team his junior year and garnered MHSAA Class 6A All-State second team honors as a senior. Rowland knew he wanted to go the junior college route and had offers to play in both sports. But Rowland felt that football could take him farther and joined Mississippi Gulf Coast Community College after graduating in 2015.

Rowland connected on 25-31 field goals in two seasons with the Bulldogs and was named to the NJCAA All-American second team both years. After the end of the 2016 season, he committed to the University of Texas at Austin, electing to join new head coach Tom Herman over Mississippi State, Southern Miss, UTSA, Lamar and a few NCAA Division II schools.

In his first season with the Longhorns, Rowland joined a kicking room that featured current Seattle Seahawks punter Michael Dickson and Mitchell Becker, who kicked off in every game the year before and also made two field goals in the 2016 season finale.

“Coach Herman brought in Josh and essentially told us both ‘Hey look, it’s going to be a competition,’” Becker said. “You know, ‘Best man wins, best man gets the job’ … We had a lot of good times kicking and making each other better during the spring. And he definitely had a strong spring.”

Becker and Dickson knew Rowland needed to be comfortable to find success. He was used to playing in front of 3,000 people, not 100,000. The two befriended Rowland, along with the other Longhorn specialists.

Rowland edged out Becker for the starting job in fall camp. Rather than turning bitter, Becker made it his priority to do everything he could to help Rowland prepare for each game. It stuck with Rowland, especially when he was benched in favor of Becker nine games into the 2017 season.

“But it was great because, especially when I lost the job, I knew my role. I knew what I had to do and it was to help the other guy, whoever it was playing.”

Rowland won the starting job back for the final two games of the year and finished the season kicking 11-18 on field goals. He found himself in a similar situation as Becker in 2018, when Herman brought in true freshman Cameron Dicker to compete with Rowland.

This time, Rowland didn’t come out on top. Dicker was named the starter and Rowland saw the field just one time all year for an onside kick against Oklahoma State on Oct. 27. He took Dicker under his wing, just as Becker and Dickson had done for him, and patiently waited for his next kick in Austin. It never came.

“Josh took on a big role for me. I know it was hard for him when I came in and got the job,” Dicker said. “But just having him guide me as a freshman … it was so cool that he would do that. I just knew that he loved me and loved all of us, and I was just happy to have someone like that because I didn’t know how it was going to be after.”

The senior graduated from Texas with a bachelor’s degree in corporate communication. But he was eligible to redshirt his 2018 season and didn’t feel it was time to hang up his cleats yet.

“I had already thought about grad transferring because I had something, I think, to prove to myself that I wasn’t done yet,” Rowland said. “I still wanted to play. I still had the drive to play and I wanted to play.”

Rowland knew the opportunity wouldn’t be available with the Longhorns and began researching teams whose starting kickers were seniors. One of them was former Bobcat kicker James Sherman, Texas State’s director of player development and a close friend of Rowland’s.

The pair met in Dec. 2016 at One On One Kicking, a personal training company focused on kickers, punters and long snappers, in Montgomery, Alabama where Sherman is from. The two became fast friends — even before Sherman knew Rowland was transferring to a school 31 miles north of San Marcos. They kept in touch, continued training with together after One On One Kicking opened a branch in Austin and attended each other’s spring games in 2018.

When Rowland told Sherman he was considering switching teams, Sherman suggested the Bobcats.

“It seemed like a pipe dream from the beginning,” Sherman said. “God’s plan is going to work itself out. And I think he was exactly where he needed to be. And we were in a position where we had the opportunity to bring him down here and have him play for us.”

Rowland reached out to Texas State special teams coordinator Nick Whitworth and joined the team soon after, as reported on June 25. His first make with the Bobcats — a 27-yarder at SMU on Sept. 14 — ended an 11-game stretch without a field goal for the maroon and gold.

Sherman said Rowland’s taken on the big brother role again with the Bobcats’ underclassmen, especially with true freshman specialists Seamus O’Kelly and Alan Orona. He’s currently pursuing his MBA at the university. He also still keeps in contact with Becker, Dickson and several other teammates. Dicker said they talk “at least once a week.”

After missing in double overtime against Georgia State, Rowland jogged back to the sideline and placed his hands on his hips, waiting again for his next kick. This time, it game.

The Panthers missed field goal attempts in the second and third overtime to keep the game tied at 34-34. Texas State gained seven yards in three plays and sent Rowland out again on 4th and 3 from the 18-yard line. Rowland lined up, nodded his head, then swung through as the ball was snapped.

The 35-yard attempt flew through the uprights. The kick was good.

Rowland’s teammates swarmed him on the field, then lifted him onto their shoulders in the locker room afterward. It was the first game-winner of Rowland’s career.

“It was one of the coolest feelings I’ve had so far being here,” head coach Jake Spavital said. “I hit the hallway right after the game and you can hear the energy and the emotion in that locker room and the music going and everybody dancing … It’s just kind of starting to create that culture that, you know, it’s a good feeling to win. And we want to keep sustaining that feeling.”

Rowland celebrated the win Saturday and Sunday, but has already moved on from it. He’ll wait for his next kick again on Saturday, when Texas State (1-3, 1-0 Sun Belt) hosts Nicholls State (2-1, 1-0 Southland) inside Bobcat Stadium at 6 p.m.

“You just gotta learn to brush things off,” Rowland said. “We’re kicking, you know? It’s always on to the next one, good or bad.”