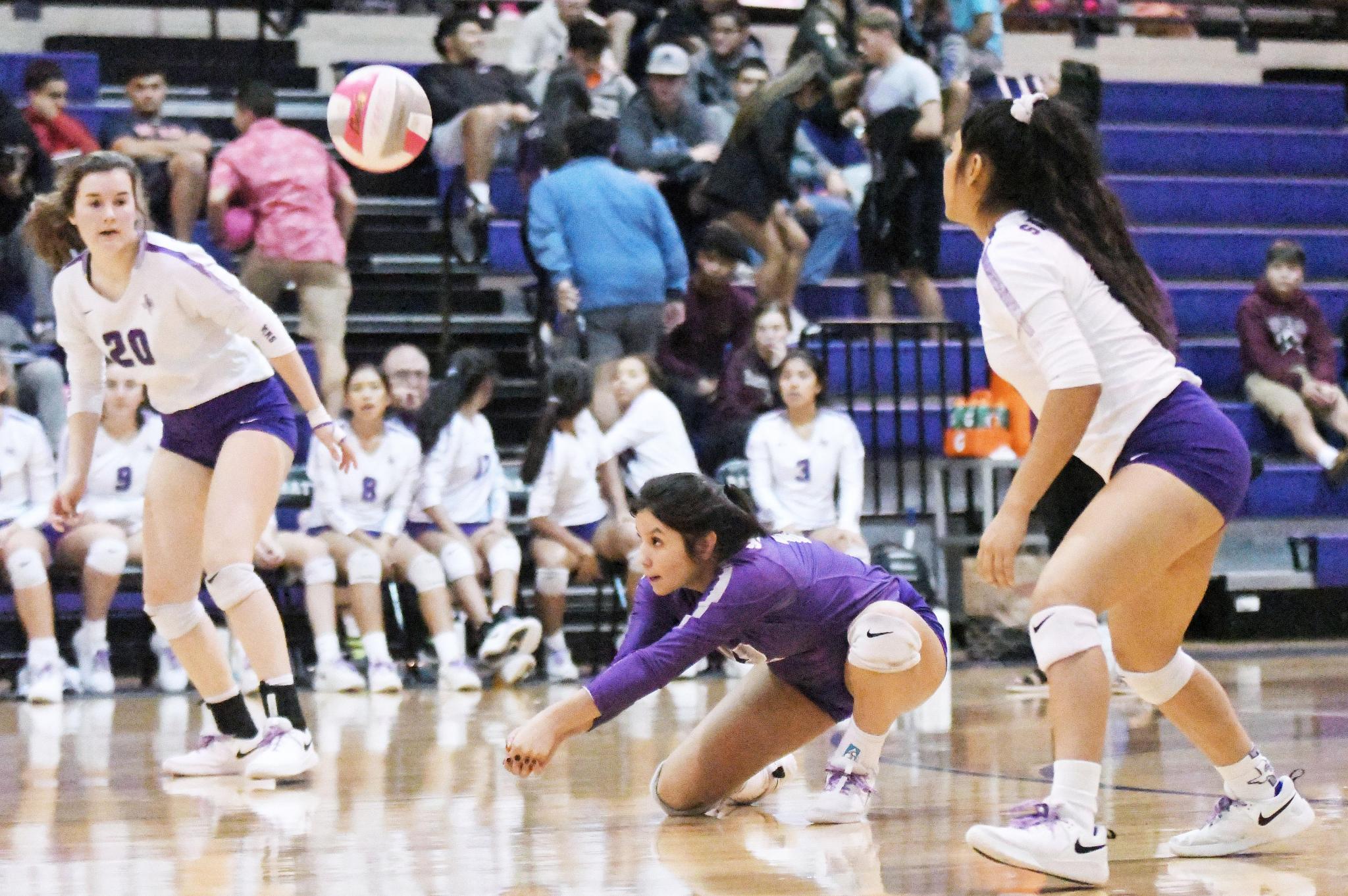 It was a bittersweet night when San Marcos (15-29, 1-12 district) played its final game of the season against New Braunfels Canyon on Tuesday night. Not only was it the last game of the regular season but it was the last high school game for seven seniors on the Lady Rattler squad, including Victoria Alvarez, Makayla Espinosa, Criselda Facundo, Julia Gutierrez, Jordan Helbig, Jade Olivo and Aubrey Reina.

“It is sad because the season went by way too fast,” head coach Michelle Moreno said. “Our seven seniors really contributed on a daily basis with leadership, good attitudes, and just that positive structure for this team. Record-wise to everyone on the outside, it doesn’t say much but on the inside, we know that we improved, we battled and we didn’t back down. More importantly, we became a family in this short amount of time and so to me, that’s a success.”

Junior outside hitter Layla Diaz opened up the game with a diving two-handed hit that made its way over the net for the first score of the night. That set the tone displaying how the team would leave everything they had in the last match of the season. The visitors had an offensive error on the next play allowing San Marcos to go up 2-0. From there Canyon played perfect volleyball long enough to go on a 9-0 run before Moreno called a timeout.

The Cougarettes continued playing consistently until the Lady Rattlers held them at 22 for three consecutive points. Junior middle blocker Samantha Booth came up with a crowd-awakening block but the visitors scored directly after that, awarding them the win in set one.

The Lady Rattlers got off to a quick start again when senior outside hitter Jordan Helbig recorded her first kill of the night and put her team up 3-1. After tying the score up at three, Canyon sophomore outside hitter Mckenzie Woitena scored three straight times keeping the team around long enough to extend its biggest lead of the set at eight. With the score 22-14, the Lady Rattlers had some ground to make up. Canyon had three offensive miscues in a row, then Diaz came running up to the net for another kill. The purple and white cut the lead down to just two before the visitors scored a kill, followed by an ace ending the set.

In the final set of the seniors’ high school careers, they played for each other more than the score. Junior setter Julia Antu found teammate Jordan Helbig for the last time to open the set. The offense for the Cougarettes came alive when SMU commit Angel Jones spiked the ball in the heart of the Lady Rattler defense. The next play, Jade Olivo dove toward her bench, saved the ball and ran back into the play just in time to get the kill for herself. The visitors went on to win the set, 25-11.

Even though the Lady Rattlers lost, it was a special night for senior libero Julia Gutierrez who broke five school records in Tuesday nights game. The senior now holds the records for passing efficiency (2.34, 2.21) and serve percentage (98.8%, 96.6%) both in a season and in a career, respectively. She also holds the record for digs in a season with 715, previously held by Celie Contreras, who had 701 digs in 2016.

“It feels awesome because I never thought that I would be here,” Gutierrez said. “Once I started realizing ‘I am good, I can do this if I put my mind to it,’ it really pushed me to start doing more things, hustle more and just play to my full potential every single night and just know I can do anything I really wanted too.”

The final district match brings an end to the Lady Rattlers’ season. The team will bring back seven underclassmen next year, including six juniors, one sophomore and one freshman. Moreno appreciated the effort her seniors showed all year.

“I’m definitely gonna miss them,” Moreno said. “I talked to them in the locker room and thanked them for their commitment for the last four years in this program and for their leadership. Not just on the varsity team but throughout the whole program, they were good role models as student-athletes on campus as well as on the court. More importantly their positive attitude and putting the team first — that was a special thing about this group, they put the team first, regardless, before themselves.”