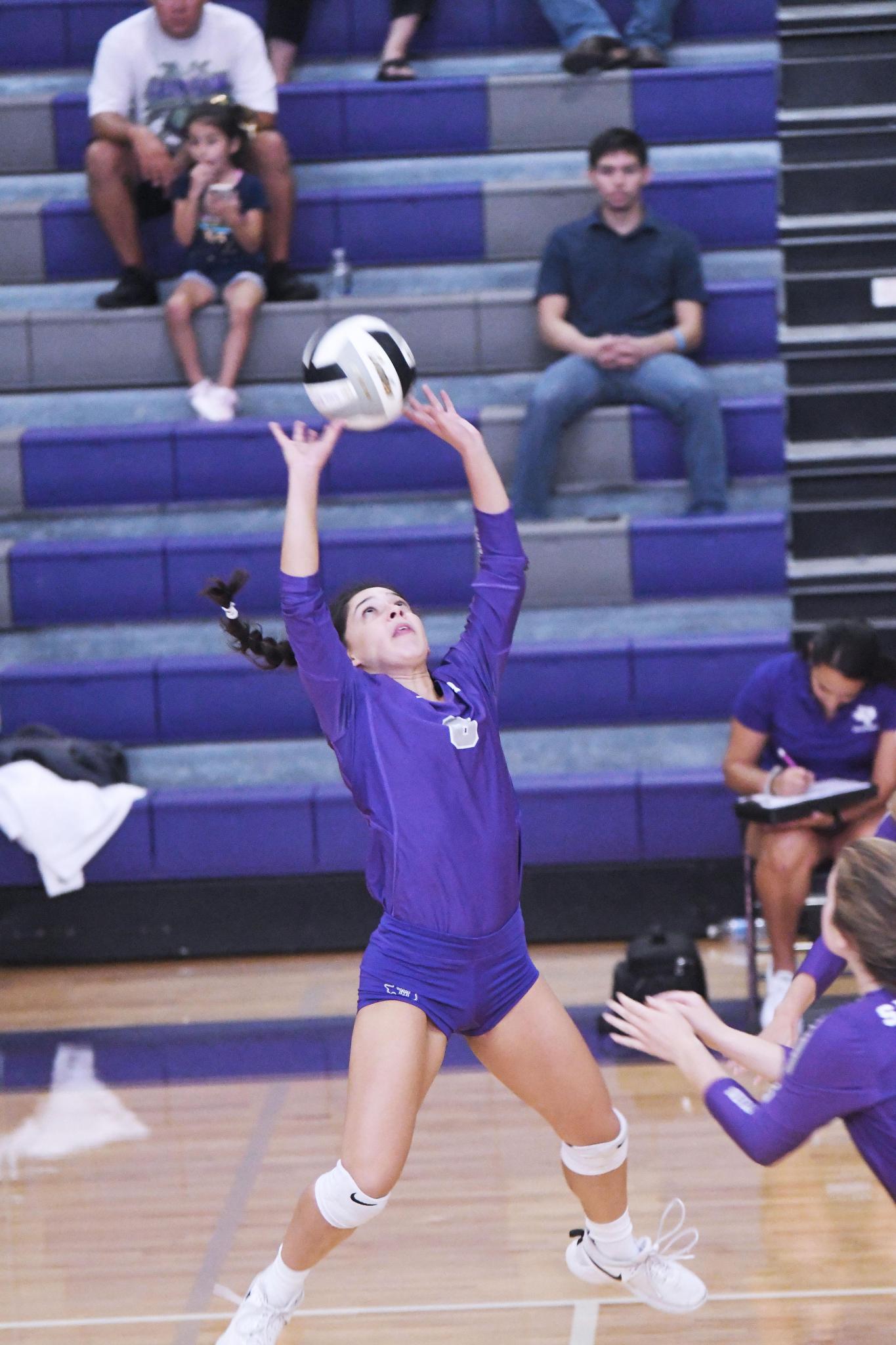 NEW BRAUNFELS — The fight in the Lady Rattlers never stops.

The Lady Cougars (27-14, 6-1) went into the matchup winning their last seven sets and added three more with the win. The team has picked 116 kills on .261 hitting percentage, allowing them to grow big leads throughout the three matchups. This time was no different.

“They were really strong outside and right side, so they were going angle, going cross, going line and we had to be on our toes said,” head coach Michelle Moreno said. “We needed to be a little quicker on the defensive movement so that we’re in a position when the hitter is hitting.”

San Marcos got the better of the hosts by scoring the first two points of the match but Canyon retaliated by scoring three points of its own. Junior setter Julia Antu assisted senior outside hitter Jordan Helbig, who recorded her first kill and set the score at 10-9. After service errors from both teams, the score continued to tug back-and-forth until the home team was able to pull the momentum to its side by extending the lead to four.

Antu found Helbig again on the outside, but this time the Cougarettes were ready for it. Canyon’s middle blockers rejected the shot. Junior middle blocker Samantha Booth immediately returned the favor resulting in a point for the visitors, though it would be their last of the set. The hosts held San Marcos at 17 for five-straight points to close out the first set, 25-17

Canyon’s dominant striking at the net continued into the second set. The team opened up a 14-7 lead that its opponent couldn’t come back from. Sophomore Emery Jones scored a tip over the middle, shifting the defense, followed by Diaz, who laid a spike down just inside the line. But San Marcos recorded a service error on the next play, rewarding the home team with a 25-19 victory in set two.

The Lady Rattlers opened up a 3-0 lead early in the final frame. Canyon got more aggressive, breaking out to its second-largest lead of the night, 11 points. San Marcos called a timeout to regroup and it worked in its favor.

The Lady Rattlers went on a 6-0 run, ignited by Helbig’s kill that silenced the crowd after a long rally. Canyon helped San Marcos by committing a few errors offensively that allowed Antu to come up to the serving stripe. Two aces and an assist from the junior put her team back within single digits, which gave the team some hope. Helbig and Diaz recorded the final two kills for the Lady Rattlers but the hosts closed it out with multiple kills of their own down the stretch ending the game, 25-19, and the match, 3-0.

Senior libero Julia Gutierrez finished led both teams with 22 digs, making plays all over the court. Helbig and Diaz carried the load offensively with 15 of the team’s 25 kills on the night. Antu’s three aces came at an important time for the Lady Rattlers and Coach Moreno had high praise for her setter following the game.

“I’m proud of her for keeping her head in it on the service line and in that pressure situation, it definitely did build some momentum and that's what we needed,” Moreno said. “(Antu’s) a tough server, she's an aggressive player so that was key in that third set and it was perfect timing. It definitely helped us close that gap.”

San Marcos will start round two of district play against San Antonio East Central on the road at 7 p.m. on Tuesday.

The last win in district play for the purple and white was against the Lady Hornets in sweeping fashion, but coach Moreno doesn’t want her team to get complacent.

“We can’t underestimate anyone. It’s the second round and everybody wants to win so we have to go in disciplined, we gotta go in working for it,” Moreno said. “We can’t assume that it's going to be another sweep, we have to work for that. Second round we’re looking to improve.”