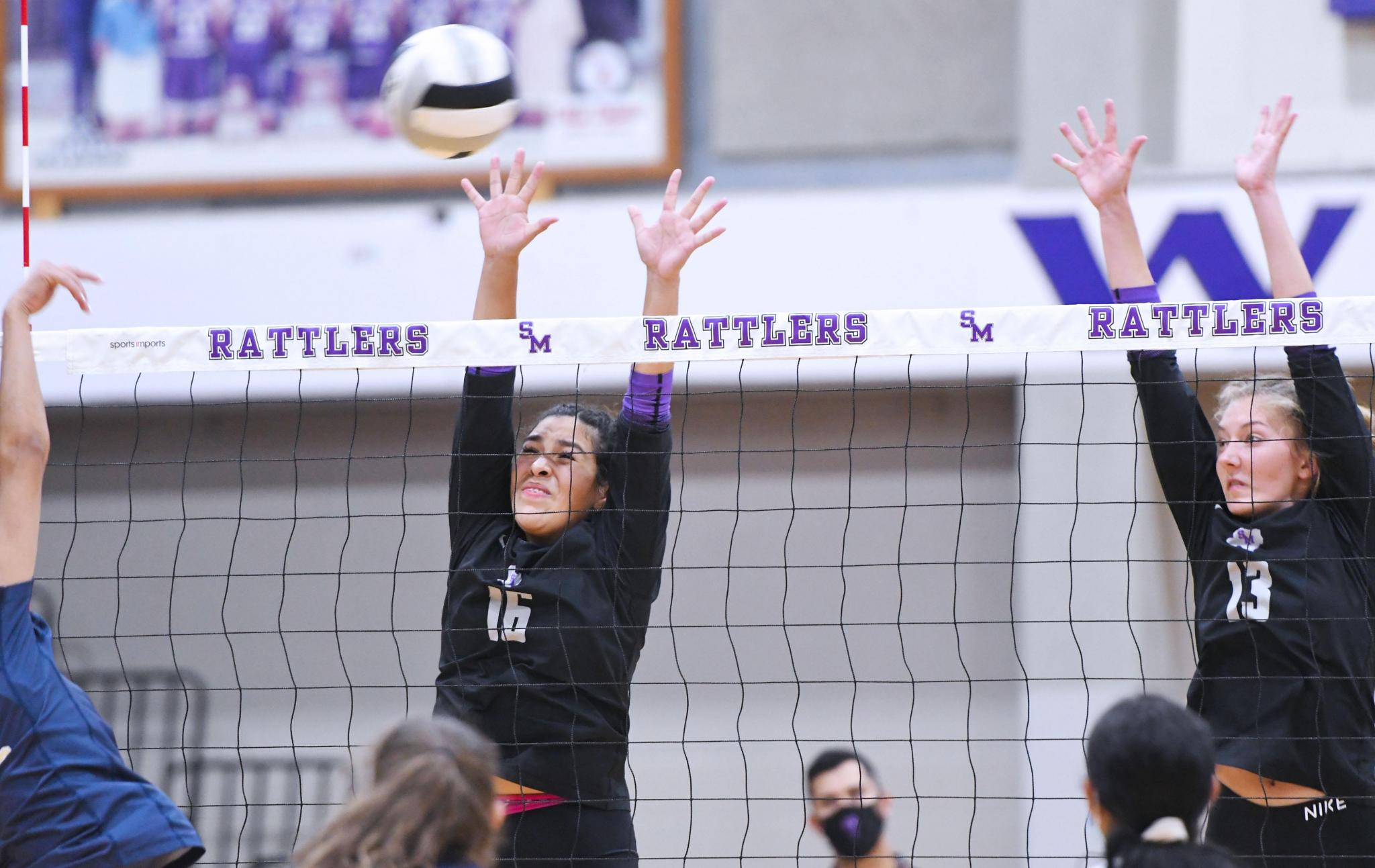 A victory was much needed for the Lady Rattlers after some tough losses during the first round of district play.

On Oct. 8, they fell to rival Buda Hays in four sets in their third meeting of the season, after beating the Lady Hawks during their previous two matches. It was difficult on the Lady Rattlers’ mentality, but they were able to adjust and regroup before their next match.

San Marcos defeated the Austin Akins Lady Eagles in a 3-0 (25-8, 25-17, 25-13) sweep on Tuesday night inside the Snake Pit. The purple and white returned home for the first time in two weeks after being on the road. While it was a good win for the hosts, they quickly have to refocus for the remainder of the season so they can secure a playoff spot.

Head coach Jared Te’o is proud of his team's win, but is always reminding them that they have to stay consistent throughout every match. This has been a big factor this season.

“It’s always good to win,” Te’o said. “We kind of had a rough week last week, so we just really have to refocus. We obviously have a really big opponent on Friday, so we’re just trying to sustain focus against every team we play on the entire map, so I think we did that.”

The Lady Rattlers (30-9, 6-4 district) flew by during all three frames, capitalizing off the Lady Eagles (9-12, 1-9) errors and only allowing 38 points the entire match. Ever since San Marcos switched to a 6-2 rotation, more players off the bench have had an opportunity to play. One of those players is senior outside hitter Sara Delgado, who’s been adjusting well to her new role. Despite being a shorter outside hitter at 5-foot-6, she’s been making big plays for the purple and white. She scored the winning point for the hosts in the second set.

“I’m just glad I get the opportunity to show,” Delgado said. “It’s just fun, and it’s great to have my teammates behind me and to have my back.”

Multiple players got on the board Tuesday night, many of those coming off the bench. Delgado registered five kills, junior middle blocker Liana Guerra added another five and freshman setter Grace Pactanac had 14 assists. Senior outside hitter Maggie Walsh nearly recorded another double-double with eight kills and 10 digs.

With only four matches left in district play, and three of those teams being in the top three, the Lady Rattlers are going to have to tune in and stay consistent, fix their mistakes and rise up to a higher level of play in order to punch their ticket to the playoffs. They’ve made mental mistakes during crucial games and Te’o is trying to modify their mindset going into the rest of the season. Every game from now on is “do or die.”

“I don’t know what their mentality is going to be,” Te’o said. “I know what mine is and I hope it kind of rubs off on them. You know, we want to win one of those matches against one of the big three, that’s the goal. Not only will that be great for our confidence, but also that’ll secure the playoff spot, if Hays doesn’t upset one of them as well … but what I want to see from them is to just continually build and handle all the little things that we didn't handle last week, and I think if you do those things then it’ll take care of itself.”

In their next district match, the Lady Rattlers are set to face the Austin Maroons at 6:30 p.m. inside the Snake Pit. During their first meeting on Sept. 21, San Marcos was defeated in a tough five-set match. They’re looking to avenge this loss in order to move one step closer to their goal.

“I’d like us to execute a game plan on Friday, and win or lose, it would just be nice to see us kind of follow what the scout is,” Te’o said. “So that’s kind of what I’m looking for and then just building on what we fixed last week.”