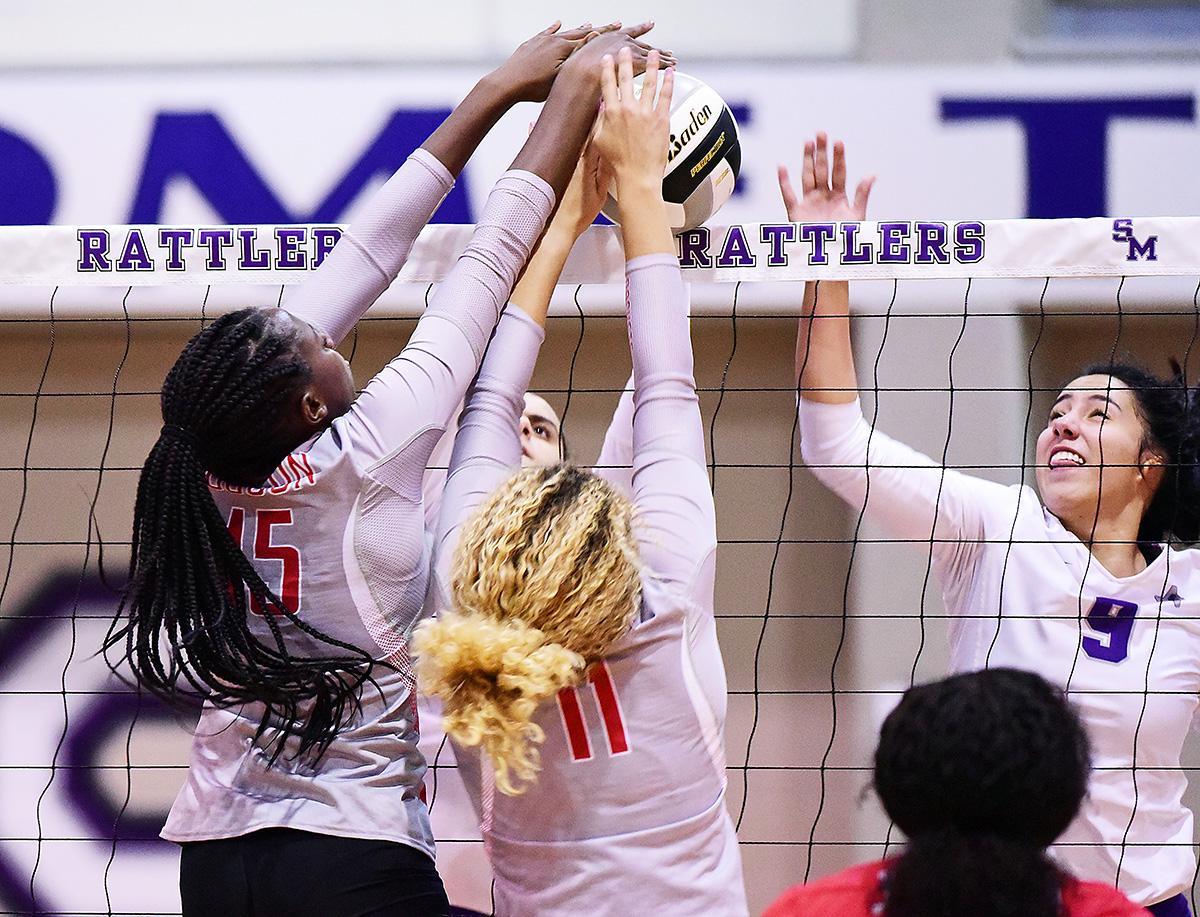 The Lady Rattlers usually dig their heels in when the match goes to a fifth set.

The occasion had happened twice this season before Tuesday night. San Marcos held off the Lockhart Lady Lions 15-9 on Aug. 21 and edged out the Alamo Heights Lady Mules 15-13 on Sept. 4. In both matches, the Lady Rattlers fought through inconsistent play through the first four sets before tightening up and getting the job done in the fifth.

But when San Marcos found its back against the wall again against Converse Judson inside the Snake Pit, the team couldn’t swing its way out. The Lady Rattlers fell to the Lady Rockets, 3-2.

“We battled all the way through,” head coach Michelle Moreno said. “The end isn’t how we wanted to end. I think we hurt ourselves in that situation.”

The errors came early for San Marcos. The Lady Rockets served an ace on the first play of the match to take the first point. They quickly built a 3-0 lead that set the tone for the rest of the match. The Lady Rattlers tied the game back up at 8-8, but Judson took the lead back at 12-11 and never let it go, taking the first set 25-20.

San Marcos wouldn’t lie down. A 6-0 serving run from junior defensive specialist Julia Gutierrez helped the team tie the match back up, winning the second set 25-18. Senior middle blocker Shyeann Lampkin scored a pair of points late in the third set with a kill from junior setter Jade Olivo and a block to earn the Lady Rattlers another 25-22 victory.

It appeared the team had returned to form and was on its way to its first victory in District 26-6A play. But Judson stormed back to take the fourth game, 25-21.

“Sets one through four, yeah we started off a little slow, but we picked it up,” Moreno said. “Battled in set two, battled in set three, four. And then, darn it, just inconsistent in that fifth set and that really hurt us.”

The Lady Rockets took an early 2-0 lead, but San Marcos came back with two points of their own to tie the frame up. Judson picked up a kill on the next play. Then the next, and the next. The Lady Rattlers suffered a 7-0 serving run that was only halted when the Lady Rockets were called for double-tapping a pass.

The team never recovered, losing the fifth set for the first time this season, 15-6.

“I really think it’s just more of our mind,” Moreno said. “I know that these girls want to work hard. I know that they want to win. But then we just start thinking about it too much and mistakes start happening. And we try not to make mistakes and then make mistakes. So, they just need to learn to play to win every single point.”

The loss leaves San Marcos (16-15, 0-2) winless in district play. The team will try to turn things around on Friday, when they’ll take on Cibolo Steele on the road at 7 p.m.

“It’s still early,” Moreno said. “And we don’t want to be 0-2, but it is what it is and we’ve got to fight our way back in. And so, like I told these girls, every night, every game night is going to be a fight. And we’ve got to be willing to fight from beginning to end.”