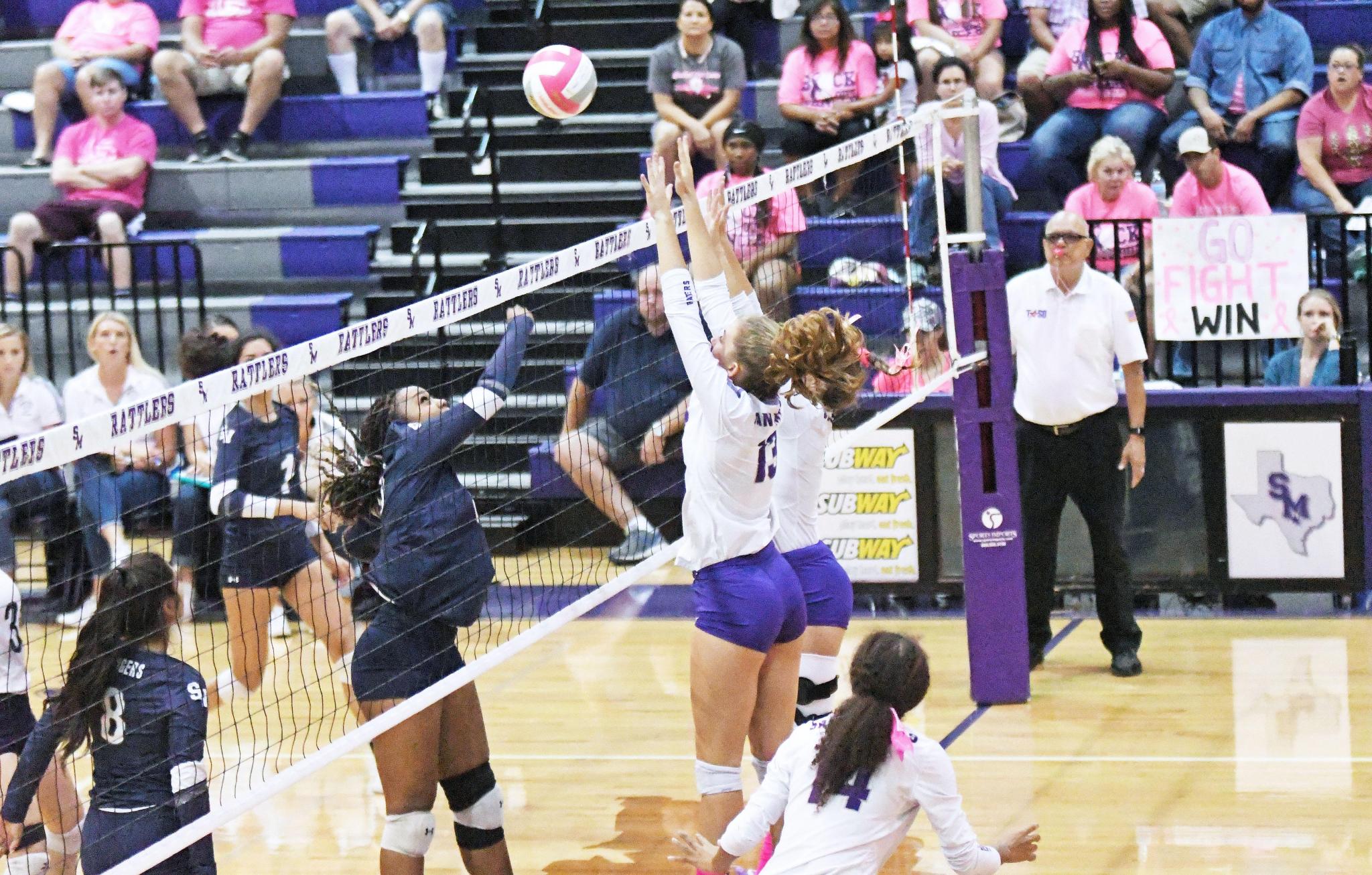 San Marcos progresses with each set.

San Marcos (15-22 overall, 1-5 district) dropped its Tuesday night matchup against district foe Smithson Valley (21-13, 5-2). However, the Lady Rattlers managed to lose by fewer points with each set that was played, even with the visitors’ concise movements around the court making it hard to follow which player would score the kill for them. With each run the hosts had, the Lady Rangers followed with a more impressive one, helping them pick up a 3-0 (25-11, 25-10, 25-20) win, their third sweep in four games.

The opening set was a tough one for the hosts. What started off as a back-and-forth match turned into Smithson Valley taking advantage of the middle of the court. With the Lady Rattlers trailing 13-9, a service error by the guests sent them to the serving stripe. but from then on it was all Lady Rangers. They went on an 8-0 run to extend their lead to 12, their largest of the night. Senior outside hitter Jordan Helbig put a halt to that run out of a timeout, but by then her team had already trailed by too much to make a come back. Smithson Valley took set one, 25-11.

Head coach Michelle Moreno figured her team couldn’t play that way all night if they wanted to compete.

“We need to regroup, that set is over,” Moreno said. “We made too many mistakes in the first set and we can't win a game like that. Let’s pick it up and get refocused with a little more effort and more heart.”

After the encouragement from their coach, the Lady Rattlers' energy seemed to blossom.

Smithson Valley came out strong, holding onto a 3-0 lead, but kills from Helbig and junior outside hitter Layla Diaz put the Lady Rangers on their toes. Junior middle hitter Samantha Booth recorded back-to-back blocks at the net shortly after, giving San Marcos a 4-3 lead. The score was tied up at 13-all until an offensive error on the hosts' behalf allowed their opponent to go up one. Booth tied it back up with a nice tip over the middle. The score went back-and-forth for four points but the visitors were able to score consecutive scores, which gave them a 20-18 advantage as San Marcos called timeout

Out of the break, Diaz recorded another kill down the right sideline to cut the lead to one. That would be the last time the hosts would score, as Smithson Valley completed two serving aces and capitalized off of errors by the home team in order to secure the second set, 25-19.

Booth’s play was key to keeping her team in a position to win that set.

“(Booth is) improving every week,” Moreno said. “She’s in a spot that she played a little bit of last year. She’s a small middle-blocker but she’s aggressive, coachable and works hard. I was just giving her props midweek last week about how she’s getting more slowdowns and those slowdowns help our back row, so I'm proud of her.”

In the closing set, San Marcos continued to fight as junior setter Julia Antu hit senior setter Jade Olivo with a backward pass that led to a 10-9 score. The Lady Rangers went on to take the lead midway through at 16-12 before the hosts called a timeout. The visitors held onto the lead for the duration of the match but the purple and white were only outscored by one point at the end, 9-8, awarding Smithson Valley the set, 25-20, and a 3-0 sweep.

Although San Marcos came up short, it won big throughout the community with its pink out night in support of breast cancer awareness.

“It was a great turnout and we just wanted to give back to our community who gives us so much,” Moreno said. “These girls are not just fighting for wins and points, they’re fighting for the cause, so it was great to see everybody come out and support both the Rattlers and the cause.”

San Marcos will travel down the road to take on New Braunfels Canyon on Friday at 7 p.m. Moreno doesn’t expect any quit out of her team. Each night will continue to be a fight, even in a losing effort.

“We always want to bounce back, even if it's a little improvement. That’s what we're striving for,” Moreno said. “Next opponent, we’re gonna be on the road and these girls are going to keep battling.”